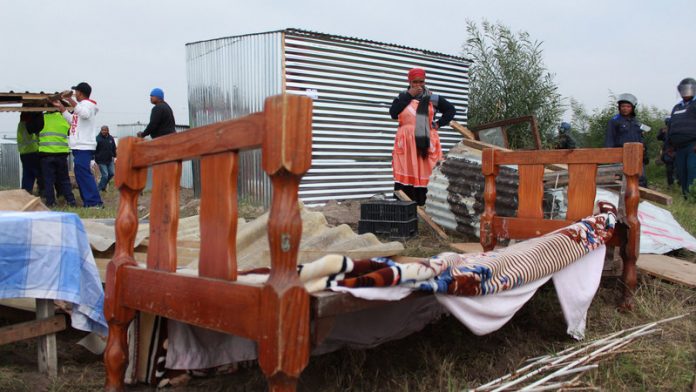 In yet another crackdown on shack dwellers in Philippi East’s “Marikana” settlement, dozens of shacks were demolished by the City of Cape Town’s Anti-Land Invasion Unit on Monday. Police providing back-up and support, humiliated, assaulted and jeered at residents as they were evicted.

As one woman wept while the building material of her demolished shack was carried away, police gathered around to taunt and mock her.

In another incident, a man attempting to resist the demolition of his shack was pounced on by five policemen and law enforcement officers. He attempted to fight back, but cried out in pain as he was subdued by having his arms twisted behind his back.

Another distraught woman attempted to keep ALIU officials at bay by swinging a wooden post recovered from her broken down shack at anyone who approached her former home. It was her attempt to save the building materials, which cost in the range of R4 000 per shack, from being carted away on the back of a municipal truck.

Outraged residents pelted police with stones as they advanced through the shacks alongside demolishers from the ALIU. Officers opened fire with rubber bullets, sending residents diving between the shacks for cover.

The evictions come in response to a sudden land occupation by newcomers to the informal settlement over the last 72 hours. Before the ALIU and police arrived, the land adjacent to the established Marikana settlement was abuzz with activity. Scores of shacks, in various states of completion, were being erected. A first round of shack demolitions occurred on Sunday.

Some newcomers told GroundUp that the occupation was co-ordinated and planned. Most pointed to the unaffordability of rent for backyard dwellings in the nearby township of New Crossroads as the main reason for them taking refuge on the open tract of land.

“We have nowhere to go,” said Amanda Thwana, 26, as she moved bottles of water, cutlery and crockery into her new shack.

“I do not know how these (occupations) are planned; the news spreads word of mouth. We just know that we have no chance if we erect our shacks by ourselves, one by one. We have to come in a big group. In numbers we are protected, because they cannot get all of us.”

By the time the police and the ALIU pulled out of the informal settlement, many of the newly built shacks were still standing.

Evictions unlawful
These are the second flash evictions to be carried out by the ALIU in Marikana this year. On 7 and 8 January, the unit demolished around 40 shacks in the informal settlement. In March, the Western Cape High Court ruled that the evictions were unlawful and unconstitutional, because they were carried out without an eviction order from a magistrate.

In handing down that judgment, Judge Patrick Gamble compared the evictions to those which occurred under apartheid and ordered the City to replace the demolished shacks. The City appealed the ruling and the Supreme Court of Appeals has referred the matter back to the High Court for oral evidence to be heard.

Central to legal arguments in the previous Marikana evictions is the question of when a shack constitutes a “home” (the right to which is protected in the Constitution). In the High Court, the City of Cape Town argued that newly erected structures were not occupied, and did not constitute a “home”. Lawyers for the evictees challenge this. With the SCA’s referral back to the High Court, the question of what constitutes “a home” remains unanswered by the courts.

ALIU officials refused to engage with shack occupiers and journalists when asked whether they were in possession of a court eviction order.

In an email, Alderman JP Smith, the City’s Mayoral Committee Member for Safety and Security, said that the Sheriff of the Court has been trying to execute court orders to remove the unoccupied structures –which have been erected or are in the process of being erected– on various pieces of privately-owned land in Philippi East. He said the private landowners obtained an interdict against the erection of structures and that SAPS assisted the Sheriff.

He wrote, “The City of Cape Town condemns the invasion of private and public land as it is of paramount importance to maintain a fair and systematic housing delivery regime. SAPS and City law enforcement agencies are trying to contain the situation. The situation remains volatile.”

This story was originally published on GroundUp.