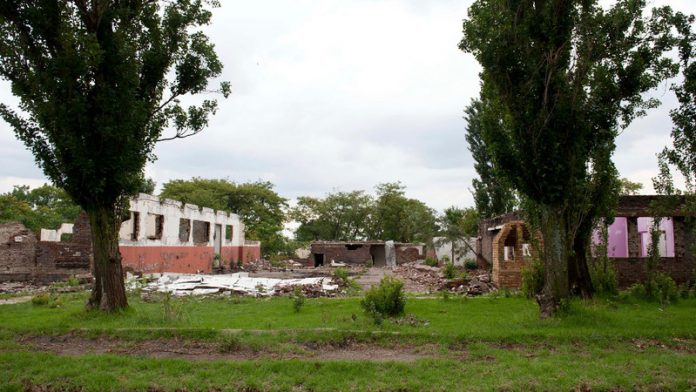 The once vibrant mining town of Blyvooruitzicht is being stripped. Its silent mine is stuck in legal limbo as liquidators try to sell it to cover debts. The environmental damage it is causing should be fixable, but any money that could be spent on this is instead being used to pay debts racked up by the mine’s old owners.

The Blyvoor mine was founded a century ago, and a small town soon grew neatly around its rich gold seams. Its name, meaning happy prospect, was born of optimism. In 2012 it was sold by DRD Gold to Village Main Reef, which declared bankruptcy just 13 months later, after losing R88-million in the last quarter.

Workers are now stuck without exit health checks – which would allow them to work elsewhere – and the derelict mine is leaking waste into the surrounding environment.

The 30m cement shaft towers rise sharply from the yellow highveld grass. The tar roads leading from it and around the once neat neighbourhoods of Blyvoor are ruined.

Thick, rusted metal pipes run from the mine to smaller facilities such as crushing plants and water treatment works. On one road a man is kneeling with a blowtorch, surrounded by flames and smoke, cutting apart a pipe. The pipe sections are then carried to a bakkie parked nearby. Blyvoor is being stripped down.

Barred entrance
At the mine’s main buildings, razor wire prevents entry, but it seems to be too late. All the windows in the abandoned mine offices are missing. Doors hang open on their hinges. A guard peers through the locked gate.

His walkie-talkie crackles. Around him are the remains of a derelict security apparatus, with metal scanners and the chipped wooden remnants of dog kennels. Loose corrugated iron sheets flap at the lightest breeze.

“The mine is killing us,” says an angry Paulo de Gouveia, who owns a small shopping centre on the edge of town. The municipal water has stopped in many areas and people are too scared of using the contaminated river water. “The mine and government have just stopped caring about this town.” He has lived here since 1965 and now wants to move elsewhere.

When Village Main Reef declared bankruptcy, the liquidator – Harvard Corporate Recovery Services – said it needed R77-million to pay off workers and settle debts. The only offer came from Goldrich, a company that soon turned out to be owned by the same people who had bought and stripped all of Aurora’s assets.

Stripping started at Blyvoor before the liquidators went to court to evict Goldrich. Now the mine is ownerless and zama zamas – illegal miners – have begun digging for gold. Dozens have been killed.

Good cover
The thick acacia bush around the town provides good cover for their activities. The crunch of tyres on the gravel road sends a man in blue overalls scurrying away, carefully carrying a spade of earth. He keeps glancing over his shoulder.

A kilometre on, similar glances are thrown by a group of five men in blue mine overalls crowded around a stripped building. They vanish into the bush, leaving a small pile of metal at the gaping hole where a door used to be.

The liquidator has said that stopping zama zamas and others stripping the mine is “nearly impossible”, given the sprawling mine premises.

Further down the road a herd of cattle graze on the verge. Some walk through pools of stagnant green sewage, which leaves a crust on their hooves. The herder, Vusi Masha, gives a smile that seems rare in Blyvoor. “Why are you here?” he asks. “People stay away unless they live here.” His worn olive-green jacket is all that remains from his job at the mine’s crushing plant.

“I am lucky my family came here with cattle, because now there is land for them to graze.” They live on the northern side of Blyvoor, in a rapidly growing informal settlement inside a wetland. This is better than their home in Carletonville.

“There is space but the mines leave so many problems.” He points at his skinny Nguni cattle with his patched baseball cap. “The water makes them sick. I heard that this is because the mine has made problems with the water. And the grass has this dust.”

Radioactivity
In April the National Nuclear Regulator found high levels of radioactivity around the mine. They inspected the site with the Green Scorpions as part of a criminal investigation into the mine’s environmental negligence. Neither can comment on the process.

They were responding to charges laid by Mariette Liefferink, a founder of the nongovernmental Federation for a Sustainable Environment. She alleged that DRD and Village Main Reef had been committing environmental infractions since 2008. Advances in environmental law mean that the directors of companies can now be found liable for the damage caused by their companies.

When mining stopped, the water pumps inside the mine’s shafts stopped. Threatened by the prospect of the fallout from rapid acid mine drainage flowing towards Potchefstroom in the southwest, neighbouring mines had to take over pumping work.

The dust is the visible problem, thanks to a massive mine dump on the western end of town. The rolling and rocky hills around it blend seamlessly into other dumps. Plants and sprinklers have made these a dull grey. They are not a problem. But the new dump, which rose up when new operations started, is a stark yellow that clashes with the town’s winter palette.

The dust blowing off its half-kilometre-long surface covers everything. Everyone in the town complains about the coughing that comes, thanks to the dust.

Fixer fund
A fund of R37-million exists to fix these problems. When a mine opens the mining and environment laws say it must continually fix problems, and deposit money with the minerals department to close the mine properly. Village Main Reef cannot comment because of the liquidation.

DRD’s spokesperson James Duncan said last year: “There is absolutely no reason why the liquidator cannot draw from the rehabilitation fund to conduct work consistent with the closure plan.”

But a lack of precedent means that this fund is stuck in the liquidation. Catherine Horsfield, an attorney at the Centre for Environmental Rights, says the Minerals and Petroleum Resources Development Act is vague. Business legislation currently gets priority so the R37-million is being used to service debtors. The environment is low on this list, she said.

Earlier this year former mineral affairs minister Susan Shabangu said there was nothing her department could do because Blyvoor had gone into liquidation. For the thousands still left in Blyvoor this means nobody can help them. The hands of each department are tied.

To survive, the residents are stripping the entire town. The only wood left is charred, in buildings that have caught fire. Crowbar marks show where bricks have been pried loose.

“Everything has collapsed. We are not a community,” says Saviour Moloetsi. He will not leave his home for fear of it being burgled. A tall man with large, calloused hands, he has to slide open a thick, black bolt on his door to come outside and talk. Maize grows in his garden. He goes to Carletonville 5km away for water. “We do not trust the water in the streams.”

He utters a worry shared by others in the town: “The mine is poisoning our water.”