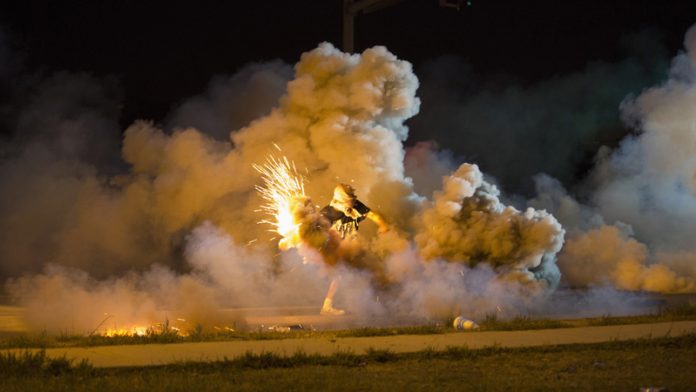 Michael Brown was apparently walking to his grandmothers apartment in Ferguson, north of St Louis in the US, on Saturday afternoon when he was shot to death several times by a police officer.

The 18-year-old teenager was unarmed.

Ferguson has a population of about 21 000 people; 67% of that population is black, yet 94% of the police force and local government are white. Residents are calling the response thus far inadequate. The officer responsible for the shooting has been put on paid leave pending the investigation.

The brutal act of violence has inspired waves of protest in the city and breathed new life into the civil rights and police brutality crises in the US, which the Federal Bureau of Investigation has been roped in to investigate.

African-American residents and civil rights leaders have since lined the city’s streets in outrage and demonstration against the shooting, causing further clampdowns by a heavily armed police force. Fairly peaceful demonstrators have thus far been surveilled by sniper and assault rifles, been shot at with rubber bullets and been dispersed with tear gas, while riot police parole the streets in tanks.

As they enter the fifth day of protest, striking and haunting images and coverage has emerged on social media.

Let’s take a look at seven of the most poignant images:

1. The militarisation of the police and their threat over residents have made it easy to draw many stark comparisons between pictures of the current protests, and those that formed part of the civil rights movement more than 50 years ago.

2. Objecting the loss of innocent lives, two young children in Ferguson hold placards with their hand prints on them that read, “Don’t shoot”.

4. Hundreds of protesters stand with their arms raised in unison to depict the “don’t shoot” plea.

5. Intimidating imagery: An armed force approaches from a cloud of gas.

6. One of the most tragic images to be shared on social media. Michael Brown’s stepfather Louis Head holds up this sign:

7. And finally, one of the most iconic images to surface since the shooting. An unarmed civilian, hands in the air, faces approaching military police with rifles pointed toward him.