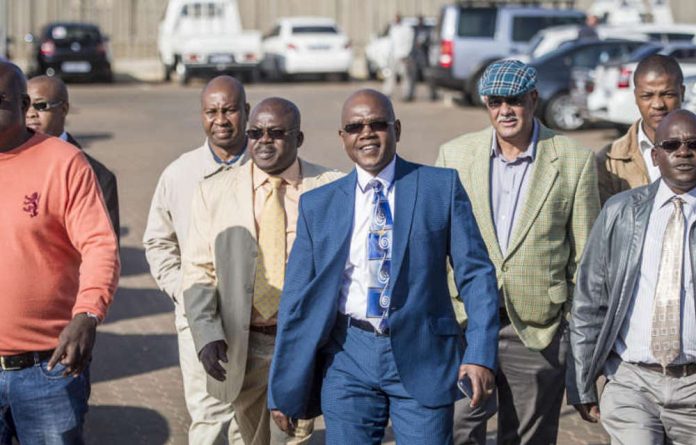 A bizarre scene played out in the corridors outside courtroom one of the Palm Ridge magistrate’s court, near Katlehong, this week – though the subtle irony was lost on most of those present.

Ex-intelligence boss Richard Mdluli, suave in his sheeny blue suit, appeared not to notice the glamorous Katerina Krejcirova, wife of Czech fugitive Radovan Krejcir, rushing into the courtroom with their son, Denis.

They were carrying bags and pulling a suitcase, possibly filled with clothes and other essentials unavailable in prison, where Krejcir has languished since his arrest late last year.

Krejcir is on trial for charges relating to the alleged kidnapping and torture of Bheki Lukhele, whose brother apparently stole 25kg of methamphetamine allegedly belonging to the Czech last year.

While Krejcir’s case got under way in courtroom one, Mdluli waited in the corridor for his own case to be called. Like a rock star, he was constantly surrounded by a protective entourage. At one stage he was even escorted to the men’s room by one of his cohorts.

Before his imprisonment, Krejcir also had a posse of hangers-on.

Both men had been equally revered and feared for the power they held: Krejcir as a wealthy Czech fugitive, and Mdluli as a relatively unknown career cop who rose to become one of the most powerful men in the police force.

But whereas Krejcir’s name has been linked to an extraordinary run of gangland-style hits, Mdluli had been operating at the opposite end of the spectrum as the head of crime intelligence.

Common denominator
On Monday both carried a new label, assigned to them by the criminal justice system: that of accused persons. Their cases are linked by a shared connection with one particular figure, senior intelligence officer Nkosana “Killer” Ximba, who was not seen in court on the day.

Ximba, whose police career was in effect launched by Mdluli when they worked together in Vosloorus on Johannesburg’s East Rand in the 1990s, was directly involved in Krejcir’s arrest in November last year. He was also originally one of Mdluli’s co-accused in the 1999 murder of Oupa Ramogibe, for which Mdluli is currently facing charges.

After serving as the Vosloorus detective branch’s commander, Mdluli was promoted to senior superintendent in July 1999. Soon afterwards, Ximba was enlisted as a student constable under his command.

Mdluli had recommended Ximba, previously as a community constable, for a permanent post in March 1999, a month after Ramogibe (26) was shot and killed in Vosloorus.

Ramogibe had started a relationship in 1997 with Mdluli’s girlfriend, Tshidi Buthelezi, while she was still involved with Mdluli. Ramogibe married Buthelezi, allegedly without Mdluli’s knowledge, not long before he was killed.

In 2011 the Hawks arrested Mdluli, Ximba and former Vosloorus police colleagues Samuel Dlomo and Mthembeni Mthunzi for their alleged involvement in Ramogibe’s death.

The Hawks alleged that jealousy drove Mdluli and his co-accused to torment his ex-girlfriend, her family and her new husband up until his death. The four denied all the charges against them.

Controversial decision
In February 2012, Andrew Chauke, the South Gauteng director of public prosecutions, controversially withdrew the murder charges pending the outcome of an inquest he instituted to determine whether the state had sufficient evidence to proceed with a murder trial.

The inquest, which never tested the other charges against the four, including those of kidnapping, assault and obstruction of justice, found there was not enough evidence to link them to Ramogibe’s death.

But a Supreme Court of Appeal ruling earlier this year prompted the National Prosecuting Authority (NPA) to reinstate some charges – excluding the murder charge – against Mdluli and his colleagues.

With the NPA deciding there is insufficient evidence to re-charge Ximba and Dlomo, Mthunzi and Mdluli are now alone in the dock.

The appeal court ruling was made after legal lobby group Freedom Under Law brought an application in 2012 to have the murder case and separate fraud charges against Mdluli reinstated.

And so it was that Mdluli, who supercharged Ximba’s career by promoting him several ranks at a stroke when Mdluli was the head of crime intelligence in 2010, stood alone in the court’s corridor on Monday morning.

Mdluli also stands accused of obstructing the course of justice by “secreting the police dockets” relating to the alleged attempted murder of Ramogibe’s friend, Alice Manana, and the kidnapping of Manana, Ramogibe and Buthelezi.

Ximba and Dlomo still feature in the strange timeline of events that led up to Ramogibe’s death.

Fatal shooting
In December 1998, while allegedly driving Ximba’s car, Ramogibe was shot at four times, but survived. Two months later, however, while standing with Dlomo and pointing out the scene of his previous attack, Ramogibe was shot again. This time he did not survive.

Mdluli has been on paid suspension from the police for about three years, while the rise of his protégé Ximba has continued, who is now seen as one of the more senior and influential officers at crime intelligence.

It is perhaps this position that led to Ximba’s involvement in a special task team established by police commissioner Riah Phiyega to investigate various crimes relating to Krejcir.

But his involvement has also led to various claims, including that he tortured Krejcir after his arrest.

Once Mdluli and Mthunzi’s case was finally called on Monday, it was promptly postponed.

Mdluli’s lawyer, Ike Motloung, was absent because of commitments as an acting judge in the Free State. Presiding High Court Judge Lucy Mailula criticised Motloung for not ensuring his availability.

Despite his cool demeanour, Mdluli appeared somewhat camera-shy, asking Motloung’s junior associate to request the media to stop photographing him in court.

His cousin and the spokesperson for the Mdluli family, Yabo Ntimane, was far less nervous. He confidently held an impromptu media conference in the parking lot, at which he told reporters that there were unknown forces at play in his cousin’s case.

“We are 100% sure and confident that he [Mdluli] will be cleared of all these unfounded allegations,” he said.

“It is quite evident with the latest drama that is unfolding in the NPA itself … [that] politics are at play here.” He referred to the renewed charges as being a “monkey on Mdluli’s back”.

Ntimane said there is mud-slinging by unnamed people both inside and outside the NPA.

The case was postponed until October 7.

NPA officials in trouble
Meanwhile, two NPA officials allegedly involved in trying to block the reinstatement of charges against Mdluli are facing their own legal woes.

A criminal case has been opened against former acting NPA head Nomgcobo Jiba and the head of the specialised commercial crimes unit, Lawrence Mrwebi, following a complaint by national director of public prosecutions Mxolisi Nxasana that the two had perjured themselves in the Mdluli matter, among others.