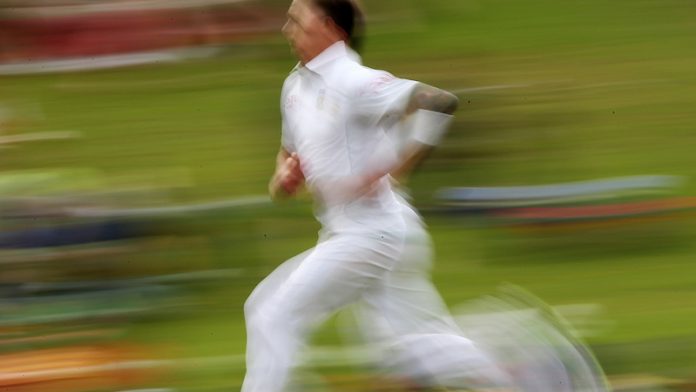 Dale Steyn is performing a stylish delivery — a gentle run-up, a slight side bend — resulting in an astonishing ball speed of 150km/h. And while South Africa counts the wickets, many young mothers imagine their sons on a cricket field, thinking “what a safe, non-contact sport this is”. Well, not if they are pace bowlers.

The injury rates among pace bowlers are as high as in contact sports, such as rugby, and injury rates among spin bowlers are less than a quarter of that of pace bowlers. This is because the inherent nature of the pace bowling action — the way the knee and lower back move during the bowling action, in combination with the jolt that runs through the body just before the ball is released — lends itself to injury.

The pace bowler’s performance, in terms of speed and accuracy, is crucial to a team’s success. The faster the bowler delivers the ball to the batsman, the less time the batsman has to decide how to play the ball. Pace bowlers bowl at the speed of a car driving on a highway and sometimes more (120km/h and above), while spin bowlers bowl at slower speeds.

The knee and lower back movements that enable the bowler to produce faster deliveries are the same movements that are associated with injury. Pace bowlers’ most common injuries are to the lower back and legs. Two movements in particular — a straightened knee and the backward bending of the lower back just before the ball is released — are associated with injury and at the same time with faster ball release speed. To compound matters, the action is repeated over and over again.

While pace bowling performance, especially bowling speed, accuracy and consistency, are of utmost importance to the pace bowler, a balance is needed between performance and injury prevention.

But do not despair for your favourite pace bowler, or your team: injury prevention is high on the priority list for Cricket South Africa and other international cricket bodies.

Injury prevention guidelines — which include three different approaches or strategies, and are still being drafted — may be the answer. The first strategy is to look at the environment and the game itself, such as the number of overs bowlers bowl or the order in which they bowl in a match. The second deals with technique, and the movement of the knee and back during bowling, with a focus on finding a balance between performance and injury prevention.Factors intrinsic to the athlete, such as balance, muscle strength and flexibility, form part of the third strategy, as they are known to protect bowlers against injury while at the same time allowing them to perform at their best. But research in this area is scarce, which is why the research we are doing is so important.

Sport-specific adaptation of the body’s internal structure, such as the change in thickness of the abdominal muscles, takes place due to the repetitive and high load pace bowling action.

Research has shown that, for instance, the oblique abdominal muscles on the left are thicker than those on the right, in a right-armed bowler, by the end of a cricket season. These adaptations may either expose the bowler to injury or protect them, but current research has found no conclusive answer. Should these adaptations to the body be protective, it should certainly be encouraged and included into programmes to prevent injuries and improve performance.

There is a great need for research that explores these internal factors as they may be key to injury prevention. If we can identify these factors and include them in injury prevention programmes for pace bowlers, it can reduce the chance that sportsmen injure themselves while we watch.

So while Dale Steyn adds to the wickets, don’t worry too much about your son: the research that is currently under way could help him to not only achieve his best, but also offer him some protection against injury.

Benita Olivier is a PhD candidate at the University of the Witwatersrand.