Save indigenous Zulu sheep and you save rural farmers 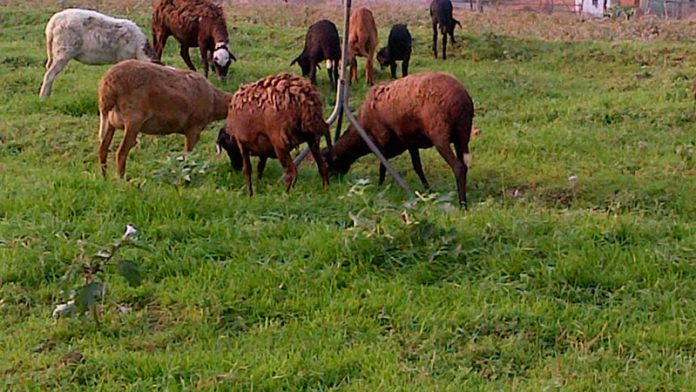 In the green plains of Zululand in KwaZulu-Natal, small skinny sheep graze. With their tangled fur and dark markings, as though someone spilt paint on them, they look different to their white, fluffy exotic counterparts. These Nguni sheep — with their distinctive black, brown and white fur and small ears — are the mainstay of subsistence farmers in the area. But these small indigenous sheep are under threat and face extinction.

Nguni sheep are divided into three groups: the Zulu, the Swazi and the Pedi, and the arrival of these breeds with the Nguni people of South Africa has been traced back to between 200 AD and 400 AD.

More than 67% of the historically disadvantaged livestock farmers operate under a village production system, which is inherently isolated and lacking in resources and infrastructure. This is why Zulu sheep are so important to these farmers: they are adapted to the harsh environmental conditions such as the hot and the humid weather of KwaZulu-Natal, where foreign breeds struggle. They can also tolerate external and gastrointestinal parasites, as well as tick-borne diseases that are common in the region.

In addition to Nguni sheep’s hardiness and survival traits, they eat low-grade forage in winter. This makes them the bread and butter of poor farmers, who do not have the money to buy expensive feed.

In 2012, the United Nation’s Food and Agriculture Organisation (FAO) reported that indigenous breeds were a source of food security, and indicated that a comprehensive characterisation of indigenous breeds in their habitats — to determine their unique traits, such as fitness and performance — was necessary to design conservation strategies. The FAO previously said that between 2000 and 2012 approximately 8% of livestock breeds had become extinct and another 21% were seriously endangered. However, the status of many indigenous breeds in developing countries is unknown.

The problem is that Zulu sheep are not attractive to large commercial farmers because of their small frames: small frames mean less meat. But at the same time they are hardy, so Zulu sheep have been crossbred with other exotic breeds. There is also evidence of inbreeding in most of the rural areas where Zulu sheep are kept. Because poorer subsistence farmers only have a few sheep and most herds are isolated with no or few herds in the neighbouring areas, inbreeding takes place. When an animal population is divided into isolated subpopulations and are inbred, their genes are likely to become damaged.

A lack of animal husbandry education among rural Zulu sheep owners results in random inbreeding, rather than an selected outbreeding. Successive breeding between individuals that are related or share common ancestors tends to reduce the rate of allelic variation. Alleles are different forms of the same genes, and if there is inbreeding the chances of deleterious genes (which are damaged) being passed to offspring are higher. It suppresses desirable alleles, which then results in an accumulation of deleterious recessive alleles. This threatens the fitness of the population.

However, there are simple and inexpensive ways of avoiding this inbreeding, such as introducing new rams into flock by borrowing or buying rams from neighbouring farmers. Communal herding also allows breeding females to mix with breeding males from other flocks.

While the majority of Zulu sheep owners did not practice any methods to control inbreeding, others said they crossbred their sheep with other type of breeds, according to a University of Zululand study. But if these indigenous animals are crossbred with foreign ones, the dominance of the exotic breed genetic pool also dilutes the Zulu sheep’s survival traits.

So, what can we do to save the Zulu sheep from extinction? There are two conservation options: protecting them where they are found in KwaZulu-Natal, or moving some of them to a special area, mimicking the natural environment and preserving biological matter, such as semen and embryos.

The department of agriculture, forestry and fisheries in collaboration with the Agricultural Research Council has established a programme called the Animal Genetic Resource (AnGR), which aims to conserve and develop indigenous livestock through traditional conservation approaches and modern biotechnological techniques. They have identified Zulu sheep as an indigenous breed to conserve in their environment. Farmers are keen to be involved and have actively participated, offering their livestock for sampling and data collection.

Involving the Zulu sheep owners is critical for conservation sustainability, because sustainable natural resource management is driven by the beliefs and behaviour of people. Rural communities see livestock ownership as a sign of wealth and prestige, and this is an important aspect of Zulu sheep conservation. Maintaining Zulu sheep’s status of prestige will contribute to our ability to protect this animal, which forms part of the country’s natural heritage and is necessary for the survival of rural farmers.

Thembinkosi “Mnqobi” Xulu is a MSc candidate at the University of Zululand.