Grant Mandela his humanity, guns and all 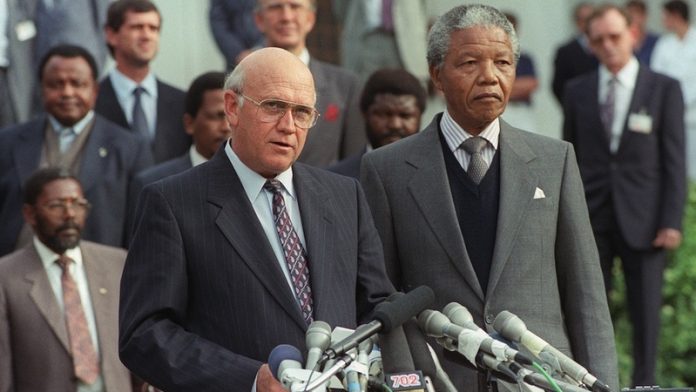 A school history textbook is probably the only history book the majority of South Africans will ever read. Such textbooks are seen as truthful, so they are powerful media in shaping young minds and forming opinions.

This fact was not lost on the apartheid government: it used textbooks unashamedly to foster apartheid myths, which some still believe today.

More progressive history textbooks are in use today but they still require examination. Given the prominence of Nelson Mandela as a historical figure, I believed it was important to look at his representation in history textbooks.

I selected three grade 12 history textbooks currently in use. What I found was that these have constructed a wholly positive image of Mandela, devoid of any flaws.

He is represented as a president, an intellectual, an activist, a political prisoner, a reconciler, a peacemaker, a sage, a saviour and a liberator. He is determined, firm and even confrontational when it is morally justifiable.

Mandela is saintly: he is reconciliatory, compassionate, caring, unselfish and forgiving. These qualities and roles, as ascribed to Mandela, feed into an overall representation of him as a messiah.

Strengthening the messiah image is the biblical language that he himself used. He refers to himself as a shepherd having to go out in front of his flock, and in another instance he is quoted as saying “I cannot sell my birthright”, a reference to the biblical character of Esau.

The textbooks use religious language themselves, such as when Mandela is said to have “converted” Afrikaners to his policy of reconciliation.

He is seen as pivotal to South Africa’s move to democracy. His release from prison is regarded as a watershed event: all the textbooks claim there could be no solution to South Africa’s problems without Mandela being freed.

From his release from prison in 1990 onwards, Mandela is present at every step on the way to democracy, saving South Africa from slipping into chaos at various junctures.

One of those, in which Mandela comes across as a saviour, was the assassination of Chris Hani in April 1993. The textbooks emphasise that the country was on the brink of disaster when Mandela rescued it by going on television and appealing for calm.

All the textbooks represent him as the one who saved the day, because his personal appeal was heeded. He continually guided the country towards democracy.

The depiction of Mandela as South Africa’s messiah is solidified by the way the textbooks have separated him from the ANC. To be everyone’s messiah, he needed to be raised above the constraints of a single organisation.

The textbooks contain scant reference to him as an ANC leader, let alone as a loyal member of the organisation. He is shown negotiating with the government independently, not through the ANC.

The gap between Mandela and the ANC becomes wider in the section dealing with the Truth and Reconciliation Commission’s report. Here he is shown as being in favour of the report, whereas the ANC is opposed to it, creating the impression of separate entities.

Hence an extremely powerful myth of Mandela exists in the textbooks. Such a mythical representation could only be constructed with misrepresentations and silences.

Misrepresentations allow him to be credited with an exaggerated importance in the historical narrative. For example, the Free Mandela Campaign is unduly exaggerated as a factor in the ending of apartheid.

He is credited with convincing the ANC to suspend the armed struggle, whereas it was, in fact, communist party leader Joe Slovo who broached the issue with the ANC’s national executive committee.

The Inkatha Freedom Party’s decision to participate in the 1994 election is also credited to Mandela’s intervention. He is seen as pursuing his own policy of reconciliation, whereas it had long been an ANC policy. Misrepresentations such as these bolster the Mandela messiah myth.

All criticisms of him, all the flaws that made him human, have been silenced. Criticisms of Mandela’s unilateral decision to enter into negotiations with the apartheid government have been silenced – yet Alan Boesak argued at the time that there was no greater sin than not consulting your colleagues.

Mandela’s embittered relationship with FW de Klerk is glossed over. So are his more radical pronouncements in his speech on the day of his release in 1990.

The limits of his power as president are not revealed. That it was deputy president Thabo Mbeki who ran the government during Mandela’s presidency is not addressed.

The failures of Mandela’s government, such as the poor response to HIV and Aids, are not mentioned. All connections between Mandela and violence have been silenced. The Shell House massacre features in textbooks but Mandela’s role in it (he gave permission to shoot at Inkatha protesters) is left out.

Since his days as the “Black Pimpernel”, Mandela has been shrouded in a myth. In jail, the Mandela myth grew into a messiah’s; on his release, he stepped right into this myth – and had little room for manoeuvring. It is well documented that this myth caused him considerable pain.

Today, such a myth that attempts to deify Mandela dehumanises him. Teachers need to separate the myth from the man and give Mandela his humanity and his history back.

We owe him that much.

Adrian van Niekerk is a teacher and researcher