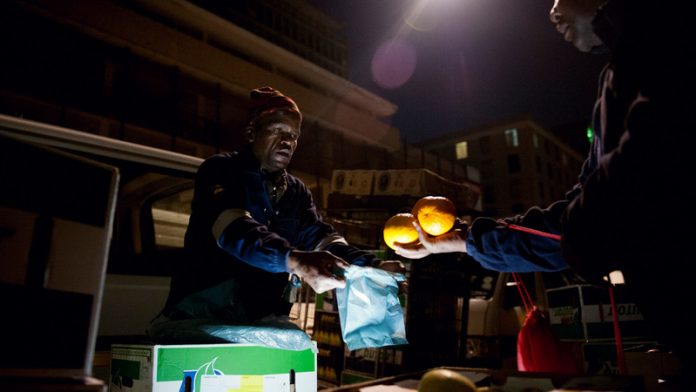 Forty-five minutes pass while I wait anxiously for hawker Geoffrey Nemakonde on the sidewalk of busy Bree Street in the Johannesburg inner city.

He sells bananas, mangoes, avocados, apples, oranges, pawpaws and guavas. He was supposed to have been here at 5am, the time he usually opens for business. It is still dark, with only the streetlights illuminating the city.

Near the robots on the corner of Eloff and Bree streets another hawker, a woman with a towel wrapped around her waist, is cooking vetkoek in a big steel pot. The smell of frying and cooking oil hangs in the air.

The gas stove is encircled with cardboard boxes. The woman tells me that she is on the street by 4am every day.

I phone Nemakonde now and then, and each time he picks up he assures me he is “almost there”. He is travelling in a taxi from his home in Lawley Extension Two, an informal settlement near Lenasia, about 35km southwest of the city.

Commuters
Taxis abruptly stop and offload passengers, who get off and walk quickly to their destinations. I keep searching for Nemakonde amid the arriving commuters. The robots turn red. A tall, dark man pushing a trolley laden with boxes crosses over to the other side where I am standing.

“Howzit, broer,” he greets me. It’s Nemakonde, dressed in matching navy-blue trousers and long-sleeved top, an embroidered woollen hat and a pair of black boots.

“I had an emergency this morning. Sorry, broer, I am late,” he says. He dashes off to a storeroom in Rissik Street, where hawkers leave their goods. Within seconds, he comes out pushing a second trolley. He offloads boxes from the trolleys, quickly removes the fruit, and packs it neatly on top of other boxes.

Passers-by frequently stop and buy fruit. A woman chooses an apple and two bananas from the stall and gives them to the 49-year-old Nemakonde, who puts them into a plastic bag. She pays with a R20 note. Nemakonde smiles and gives her some coins for change. “Siyabonga,” he says as the woman walks away.

Stock run
It is 6.23am. Nemakonde leaves his assistant to man the stall and we catch a taxi to the Johannesburg Fresh Produce Market, where he buys his stock in bulk.

We arrive at the market 15 minutes later. There are lots of hawkers from as far away as Mpumalanga and Limpopo. Trucks and bakkies are parked outside and buyers, including hawkers from the inner city, load their stock into them.

Nemakonde walks to the sellers of oranges, pawpaws and bananas at an agency called Dapper. “I buy here because the fruits are always fresh,” he says, adding that he started selling in the street in the 1980s. A bespectacled man called Antony Turner attends to him. He has known Nemakonde for a decade. “He is a good customer,” he says.

Nemakonde chooses 15 boxes of pawpaws and puts them aside. He then queues with other customers at a cashier, where they deposit money into their buying cards. He deposits R1 200 and then goes back to Turner to pay. He buys guavas from a different seller.

“I now have to look for a person with a trolley who can help carry my stock,” he says. He waves to a man with an empty trolley. The man loads the stock, then pushes the trolley outside to the bakkies. Nemakonde pays him R10.

Nemakonde asks the driver to transport his goods, to which he readily agrees. We load the stock and set off back to town. The streets are now teeming with people walking past the stalls lined up in front of the shops.

Operation Clean Sweep
Later in the day, Nemakonde gets a call saying the metro police have removed hawkers from their trading spots on the corner of President and Rissik streets, near the Gauteng legislature. He rushes over there, but the cops have already left by the time we arrive. “This is how Operation Clean Sweep started,” he says. “Last year, the metro cops started removing people from three streets and then targeted other hawkers.”

Nemakonde catches a taxi to the Fresh Produce Market, where he purchases his stock.

Nemakonde is worried by rumours that hawkers will be relocated from the inner city and that there won’t be any customers. On a good day at his current spot he makes R1 300. “Taking my business to some quiet place may affect the profit I make,” he says.

At present, hawkers do not pay any rent to the city, but Nemakonde says he would be willing to pay if the city would provide them with access to water and a toilet.

Relocation
Ruby Mathang, a member of the mayoral committee for economic development, says that he acknowledged the hawkers’ problems, and this was why they wanted hawkers relocated to markets.

“People selling perishable items like food want to be where there are lots of people. Why should hairstylists mix with people cooking food?” he asks.

Some traders “have taken the whole pavement” for hawking and disturb pedestrian movement.

There are now 3 740 registered informal traders operating in the inner city, and the intention is to double that number “and make Jo’burg a 24-hour city”, he says.

Part of the solution to the trading space problem will include setting aside some buildings for trading purposes, and building what he calls “linear markets”. These are rows of stalls, with roofs. The markets, according to the Johannesburg Development Agency’s website, will “serve as incubators” where the traders’ developmental needs will be identified. The aim, though, is to ensure that “traders grow and are able to move into more formal business”.

Street closures
In principle, says Mathang, the city wants to close some streets and relocate hawkers. He does not yet have the names of the streets to be closed, but says they will include some where there is a constant movement of vehicles.

“The closing of streets is part of the bigger vision of where we want to be as a city. We want to be a vibrant cosmopolitan city like New York and London. They will tell you in New York that those migrants from all over the world make the city viable. We have come to acknowledge that Jo’burg is a cosmopolitan city,” Mathang says.

Nemakonde buys fruit in bulk and then sells it piecemeal from his stall.

He says the ongoing raids by the metro police will enforce bylaws. “We will continue to confiscate [goods] and the hawkers also agree with us. They said we should confiscate the stuff if someone is found to be engaged in illegal activities. The court has not said we have to suspend the current bylaws.”

Illegal activities such as selling pornographic DVDs are going to be stopped, he says.

Senior superintendent Wayne Minaar, the metro police spokesperson, says that hawkers are not allowed to trade outside government buildings and must not obstruct traffic.

Metro interference
But a spokesperson for the South African National Traders Alliance, Edmund Elias, says the metro police are not allowed to interfere with trading. The Constitutional Court in December ruled that the hawkers be allowed to return to their inner-city stalls. The court interdicted the city and metro police from interfering with them.

“They are testing us again. They say hawkers are here to stay, but go and do the opposite. They have no respect for poor people.”

Hawkers registered with the city have smartcards – trading permits from the Metropolitan Trading Company, an entity formed by the city in 1999 to manage informal trading. The company has allocated each hawker a sidewalk space of 3m x 1.5m.

Mathang says the city approached Wits University to carry out research and the city was “currently going through the report with a view to garner information to be infused into the consultative report”.

The report will hopefully help “to stop the eviction and confiscation of goods in the inner city,” he says.

Back at Nemakonde’s stall, pedestrians are now on their way home, and are still buying fruit.

“I’d like to grow my business, but because of this small space,” he says, gesturing to his spot on the pavement, “I cannot sell more.”