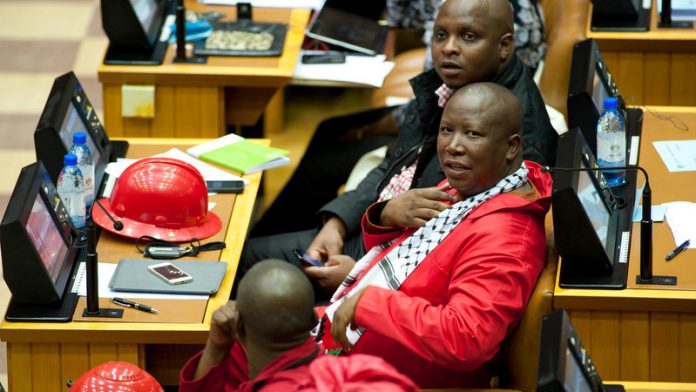 The National Assembly had to be temporarily suspended after Economic Freedom Fighters (EFF) members demanded that President Jacob Zuma pay back Nkandla money.

“Take back the money,” the members wearing red overalls chanted. This after EFF leader, Julius Malema, was unsatisfied about Zuma’s answer regarding the money spent on upgrades to his private residence.

The public protector found that Zuma benefited unduly from the R246-million upgrades. “My response to all the reports on the security upgrades at my private residence was submitted to the speaker on Thursday last week,” the president told parliament. “I hope we are not going to make a debate on this issue. I’ve responded appropriately.”

Zuma added that the matters raised in the public protector’s report have been referred to people who are legally qualified to make a determination about who should pay and when.

Malema was unhappy with this answer, accusing Zuma of skirting the issue. “We are not going to leave here before we get an answer … When are you paying the money, because the public protector has instructed you to pay the money?”

National Assembly speaker Baleka Mbete suspended the house after EFF members started banging on their hard hats shouting “we want the money” and “Nkandla must be paid”, asking security to remove the rowdy members.