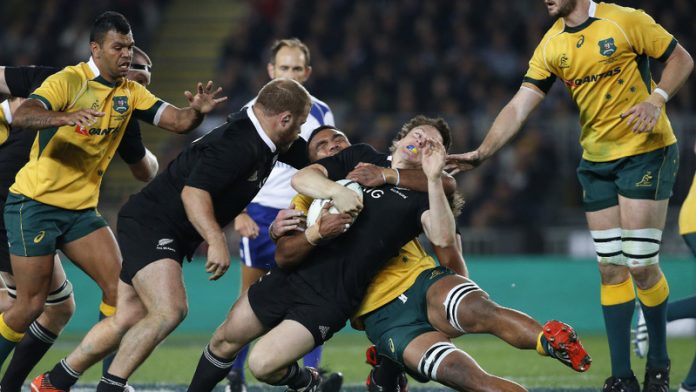 New Zealand’s forwards responded to criticism of their performance in their opening Rugby Championship clash to set the foundation for a 51-20 victory over Australia at Eden Park on Saturday that also ensured the retention of the Bledisloe Cup.

All Blacks captain Richie McCaw, who was sinbinned early in the game, scored two tries while Kieran Read, Julian Savea and Steven Luatua also crossed, with their pack awarded a penalty try as part of a record score against the Wallabies.

The victory ensured the Bledisloe Cup remained in New Zealand for the 12th successive year. The third match in Brisbane in October is now a dead rubber in terms of the battle for the symbol of trans-Tasman supremacy.

The All Blacks had been pilloried for their performance in a 12-12 draw in Sydney last week but responded in stunning fashion at Eden Park.

While Cruden and Beale traded early penalties, the sinbinning of McCaw in the 13th minute for a professional foul galvanised the home side, who controlled the ball the entire time their captain was on the sideline.

With the All Blacks leading 9-6, the tide of the match turned when Wallabies lock Rob Simmons was sinbinned just as McCaw was returning.

The All Blacks exploited their man advantage at an attacking scrum, shunted the Wallabies’ pack backwards and then disintegrated it with referee Romain Poite awarding a penalty try.

Then they produced a sweeping counter-attack from inside their own 22 after turning the ball over, spread it wide with Cruden drawing defenders before offloading a perfectly timed pass to Savea outside him.

Cruden’s conversion gave the All Blacks a handy 23-6 lead at the break that they extended with clinical brutality in the second half with a scintillating 10-minute burst that produced three more tries.

Read crossed after another superb counter-attack, while McCaw then grabbed a brace of scores from attacking lineouts after the All Blacks had forced the Wallabies into errors.

Folau and Hooper scored two quick consolation tries for the visitors and the match essentially went through the motions for the final 15 minutes before Steven Luatua scored a last-minute try that Aaron Smith converted to give them a record score.

The All Blacks’ previous best score was the 50-21 they accumulated in 2003, the year they regained the Bledisloe Cup.

Both sides now have a week off before their next Rugby Championship clashes, with the All Blacks playing Argentina in Napier, while the Wallabies head to Perth to host South Africa on September 6. – Reuters