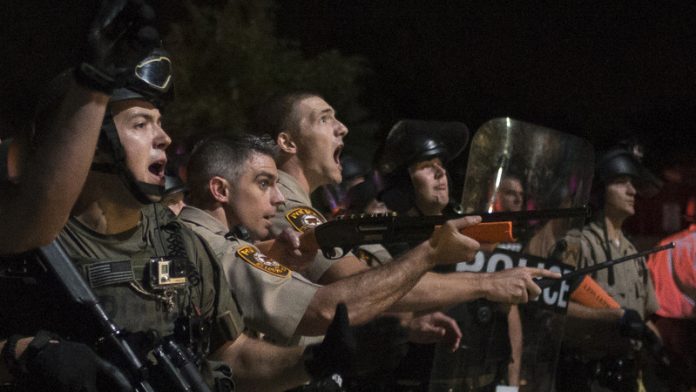 Protests in Ferguson, Missouri, were muted for a third straight evening on Friday as the National Guard began withdrawing from the St Louis suburb racked by racial turmoil after a white police officer shot dead an unarmed black teenager.

Hundreds of protesters marched in the hot summer night near the site of the August 9 slaying of 18-year-old Michael Brown, chanting “Hands up, don’t shoot,” while police vehicles observed the demonstration, without intervening.

At St Mark Family Church, a hub for protest organisers, activists and residents met to pray and work on plans to improve the predominantly African American community of 21 000 in the wake of unrest that has focused international attention on often-troubled US race relations.

Despite a notable easing of tensions in recent days – police made only a handful of arrests on Wednesday and Thursday – authorities braced for a possible flare-up of civil disturbances ahead of Brown’s funeral, which is planned for Monday.

Police in Ferguson came under sharp criticism, especially in the first several days of demonstrations, for arresting dozens of protesters and using heavy-handed tactics and military gear widely seen as provoking more anger and violence by protesters.

In the latest embarrassment for local law enforcement, an officer from the St Louis County Police Department was removed from active duty on Friday after a video surfaced in which he boasted of being “a killer”.

Officer Dan Page, a 35-year-veteran of the police force and a US military veteran, was relieved of patrol duties and placed in an administrative position pending an internal investigation, a police department spokesperson said.

In the video, Page is seen addressing a St Louis chapter of the Oath Keepers, a conservative group of former servicemen, saying, “I’m also a killer. I’ve killed a lot, and if I need to I’ll kill a whole bunch more. If you don’t want to get killed, don’t show up in front of me.”

He also made disparaging remarks about Muslims and expressed the view that the United States was on the verge of collapse.

St Louis County Police Chief Jon Belmar apologised for the comments in the video, saying they were “bizarre”. In a statement he said that while Page “has never been involved in an officer-involved shooting, the statements made about killing are unacceptable and not what we are about as a department”.

Two days earlier, another St Louis-area policeman, an officer from the town of St Ann, was suspended indefinitely for pointing a semi-automatic assault rifle at a peaceful demonstrator and yelling obscenities.

The incidents have highlighted the racial divide in Ferguson, a largely black town where the police force and local politicians are almost all white. Civil rights activists say Brown’s death was the culmination of years of police unfairly targeting blacks.

The White House said it was encouraged by developments over the past few days, and that President Barack Obama was receiving regular briefings on the situation in Ferguson.

A grand jury, made up of three blacks and nine whites, met this week to begin hearing evidence in the case, a process St Louis County Prosecuting Attorney Bob McCulloch said could last into mid-October. Nine votes are needed for an indictment.

Vanessa Spencer (46) a cafeteria manager who lives in St Louis, took part in Friday’s protests, holding a sign reading “Keep Calm Change Coming.” Beside her was her sister, Linda Bell (57) a cook, with a sign saying, “Together We Stand 4 Peace 4 Mike Brown.”

“But with a grand jury that is mostly white, are we going to get justice?” Bell asked.

Besides activists and clergy, a contingent of US civil rights workers and community activists from Georgia, Florida, Detroit and elsewhere have set up shop in Ferguson and say they plan to stay for an extended period.

The patchwork of groups, including the Dream Defenders and the National Lawyers Guild, are holding training and strategy sessions for young people and others who want to continue to peacefully protest Brown’s death. They are instructing teams of “legal observers” how to document complaints of police harassment and abuse.

“This is going to be a part of history. It really is,” said Christi Griffin (58) a black attorney from St Louis who helped organise activities at the church meeting on Friday night before a small group of protesters left for the street clad in protective helmets.

Missouri Governor Jay Nixon ordered the National Guard deployment to help police quell looting and vandalism that erupted during previous nights of protests, but the troops have largely kept a low profile. Nixon on Thursday ordered their withdrawal to begin.

Brown’s parents and supporters have been calling for the immediate arrest of Darren Wilson (28) the police officer who shot their son. Wilson has been placed on paid leave and has gone into seclusion. – Reuters