Monster of SA rock: Little Oppikoppi is all grown up 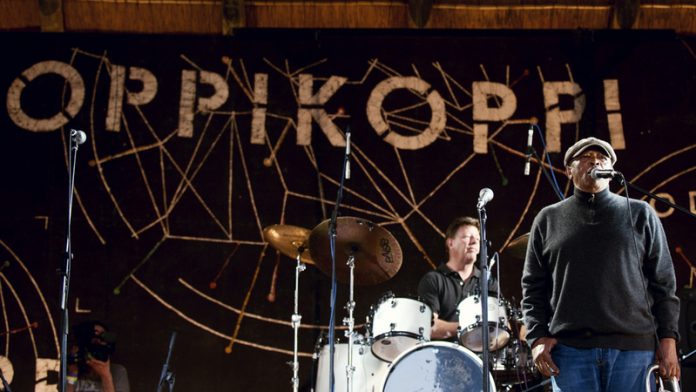 The sky is aflame with the setting sun by the time jazz wild man Hugh Masekela wraps up his set on the James Phillips stage at this year’s Oppikoppi festival. Indefatigable and with arms flailing, he initiates a string of his classic call-and-responses as his band plays out the last notes of his hit song, Thanayi.

“You’re so beautiful!” Bra Hugh says to the sea of starry-eyed youngsters who are worshiping at the altar of one of the last remaining darlings of South Africa’s Golden Age of Jazz. They plead with him for more, and he is only too happy to indulge them with an encore.

Alet Venter has, arguably, the best seat in the house. Perched on a rock on the koppi that overlooks the stage where Bra Hugh is conjuring magic with his rapturous trumpet, she is sipping on a sundowner while taking in the scene before her. “There are definitely a lot more people at Oppikoppi than when I first came here. And they’re younger,” she says. She pauses and adds: “Well, they’re younger because I’m a lot older.”

Fifty-something year old Venter wears her Oppikoppi veteran badge with pride. Excluding a short break when she had her child, she has been coming to South Africa’s largest music festival since its inception in 1994. “If you look at these young people, they like to dress up. They’re making Oppikoppi almost into a cult. There are fairies and … look at that one,” she says, pointing to someone in the crowd, “He has a diaper on. You see everything here.”

Kombuist-ian engine
What started out as a series of band weekends on a farm in Northam, some 50km from Thabazimbi in Limpopo, has now ballooned into a music festival that hosts about 20 000 people. They make the trip to the country’s furthermost province to carouse in the bush for three days while listening to some of the best local and international musical talent, both well-known and undiscovered.

Venter first found herself on the now famous Northam farm when she came to Thabazimbi for a Koos Kombuis gig. Her school friend and Kombuis’s fellow Voëlvry comrade-turned manager, Dagga-Dirk Uys, had organised for Kombuis to perform in the old mining town. When the anti-establishment Afrikaans musician performed AWB Tiete (the tits of the Afrikaner Weerstandsbeweging), a song deriding the Afrikaans far right political organisation, Venter felt uneasy about the crowd she and her friends were in the company of.

“There were a lot of people in the audience that looked like the people Koos was singing about. We were a bit scared, hey, because we thought they were going to beat us up,” says Venter.

After the show, and fortunately in one piece, the group took the party to friends Tess and Boors Bornman’s farm and ended up staying much longer than they intended.

It was on this farm, where today the Ray-Ban top stage stands, that the first inklings of a music festival out in the middle of nowhere were conceived.

“It was extremely primitive in the beginning,” says Venter. “There were just cold showers. They were terrible. When we showered the guys would try to peep in from underneath and we would slap them with our towels. There were no cubicles. You just went in there and everybody saw everybody.”

And while you can now line your stomach with chow mein, boerewors rolls, burgers, paninis, or even a roosterbrood (toast) from “Kobus Se Gat”, you initially had to bring food from home when you came to Oppikoppi.

Venter remembers that there was, however, a pancake-making family who would serve hungry customers out of their car. The sister would handle the cash, while one of the brothers would make the batter. But the real drawcard was the second brother, who would flip the pancakes shirtless, in nothing but an itsy-bitsy broek (shorts).

“He was so sexy,” says Venter. “He had the ladies queuing for pancakes all day.”

Gesellig and calm
Tony Groenewald, Hilltop Live’s head of production, was there from the beginning too. But back then, he was just one of a group of students who came to the initial band weekends for a break from the city. Groenewald says that the first official Oppikoppi in 1994 had just one stage, which hosted about 30 bands and musicians.

It was the first time the gathering had moved from being on the top of the koppi to the area just below it. People pitched their tents around a swimming pool where the banking area is now. A grumble of Hells Angels helped set up and the mood was mellow, save for the bikers squabbling among themselves.

“Those band weekends and the first official festival have become one big blur for me,” says Groenewald. “It was gesellig [cosy] and calm and an opportunity to defrost from the winter.”

Now in its 20th incarnation, Oppikoppi’s theme this year was the Odyssey. And what an epic journey it has been for the festival, which presently has seven stages and sees about 150 bands play during the course of the weekend.

One does not simply venture into Mordor
But while the facilities may have improved, the Oppikoppi experience is still far from luxurious. Dust cakes your lungs and coats your nostrils; it’s an enduring reminder of your revelries when you are still coughing it up weeks after the festival.

Avoiding being impaled by thorns and being burnt to a crisp by the hot Limpopo sun deserves a pat on the back, more so if you are one of the hapless prawns staying in the general camping area affectionately known as Mordor. Despite this, more and more people still come to Oppikoppi every year.

This is because every festival has a character, says photographer John Hogg, and Oppikoppi is no different. “It has an edge,” says Hogg. “You survive Oppikoppi, you don’t just attend it.”

This year marked the 16th time Hogg has documented the festival through his lens, a feat festival organisers acknowledged by giving him an exhibition at Oppikoppi this year.

While he has seen the festival morph through the years, Hogg says the essence of Oppikoppi hasn’t changed. “It’s music first and music last,” he says. “That’s why it’s successful.”

Old festival favourites like rock legends Springbok Nude Girls and guitar whizz Albert Frost are always a treat for Hogg, but it’s those unfamiliar bands that you accidentally stumble upon that are the most rewarding, he says.

“I remember in about 1998, I walked around the corner at the top stage and there was a band called Die Naaimasjien (the sewing/sex machine) playing. It was this really loose, boerefunk type of band. There were a whole lot of backup singers and some skinny guy in shorts groping himself and rubbing himself up and down on everybody. It was just great to watch,” says Hogg.

Old is the new new
Introducing festivalgoers to new music is what Oppikoppi is all about, says Groenewald. This was also true of this year’s festival, albeit in a slightly roundabout way, as the mostly tender-aged audience were schooled in classic South African rock: bands like Squeal, Springbok Nude Girls and Urban Creep had elected to play reunion shows.

“I was so surprised to see the people in the front jamming. There is no way that they were even born when Urban Creep, for example, was big,” says Groenewald. “It was a huge moment for me – it gave me goosebumps.”

Other performances that have stood out for him over the years are David Kramer’s 2011 tribute show and Mango Groove’s rollicking set in 2013, which drew a crowd larger than any of the international bands that played.

As the curtains closed on this year’s festival, one had to wonder what is next for the not-so-little festival on the hill, which some say has already gotten too big.

Groenewald says expanding Oppikoppi further is a consideration but will be challenging because there is no water or electricity on the farm. Everything comes down to having enough water, he says, and each year five 115 000 litre dams are stockpiled for the festival.

Three years ago organisers scaled up Oppikoppi from a 15 000 to a 20 000 people capacity and it took a whole year’s worth of preparation to do so.

Accommodating another 5 000 people wouldn’t be easy, but it’s not out of the question either, says Groenewald.

The house that women built

Our pick of Oppikoppi’s hottest acts