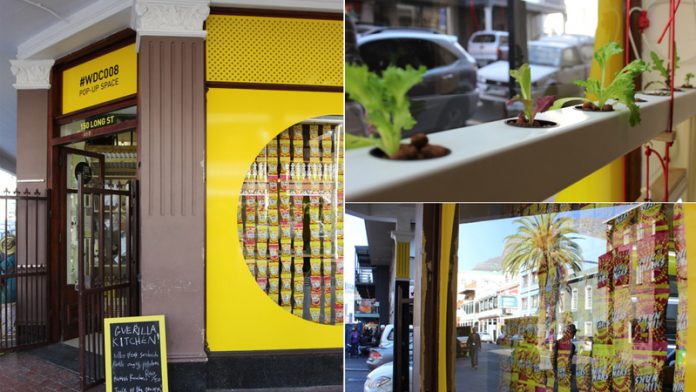 Born and raised in Johannesburg but living and working in Stellenbosch, Ruann Coleman is a young artist seeking balance. His works consists of found objects sourced from nature and junk yards that he shapes or distorts so that they become free-standing sculptures or balance precariously against one another; in a way that’s more than a little frustrating to figure out.

Coleman’s process involves walks through Stellenbosch, where he searches for interesting shapes. Through slight manipulation, and after bringing the piece into the gallery space, the context is changed. By working with gravity, but seemingly defying it, they become his next works of art.

Finding these pieces is an art in itself. Coleman has one specific road where he’s sure to find an abundance of twigs, but he makes rules for himself that dictate a waiting period of three days before picking any up. If they’re still there and he still really likes a specific twig then he’ll pick it up and take it to his studio. Coleman took part in the FNB Joburg Art Fair with two pieces that aimed to elicit the age-old musing, “Is it art?”

We’ve passed the halfway mark of Cape Town’s year as World Design Capital and, as promised, the official #WDC008 Pop-up Space just opened its doors on Long Street. In true South African style, the space takes a DIY approach to design to showcase local creativity. We paid a visit to the new spot to see what the fuss is about and it turns out that the team at Studio HV, who are managing the project on behalf of World Design Capital, collaborated with a few local creatives to turn this small and slightly awkward space into something of a design wonderland.

The #WDC008 Pop-up Space is tiled with locally sourced and branded recycled cardboard and comic-style printed paper wall tiles. In the one window there’s a custom vertical hydroponic farm growing lettuce, while the other window celebrates the slightly less wholesome but equally delicious local snack, Nik Naks. Speaking of snacks, the space also hosts a Guerrilla Kitchen and a coffee bar by Department of Coffee.

The main attraction in #WDC008 is The Coop, a lock-up-and-go retail space to showcase and sell local products – everything form Lorraine Loots’ 365 Postcards for Ants to Reneé Rossouw‘s liquorice-inspired ceramic vessels are for sale. There’s also a Pop-up Projects Room and an Interactive Kids Room with educational toys and a library curated by Nali’ibali. The Pop-up Office – complete with free wi-fi, ample seating and more than enough plug points – invites the public to come inside, hang out, get some work done and be inspired by clever local design.

Cape Town-based artist Rowan Smith is interested in endings and what comes after. His recent solo exhibition at WHATIFTHEWORLD / GALLERY explored the literal and figurative ruins of the here and now that is post-apartheid South Africa. He is also interested in the idea of post-modern consumerism; the accumulation of “stuff” to the extent that it becomes not anything, not everything. Smith’s work is characterised by deep critical enquiry and exceptional execution.

When asked what the salient themes and concerns in this recent exhibition, No Everything? are, he replied: “Currently, in my work and research, I’m very interested in interpreting the complex and illusory socio-political and cultural landscape that is contemporary, post-apartheid South Africa. I’m interested in what has changed versus what has been made to appear to have changed versus what hasn’t changed at all.

“So subjects such as the massive economic division that is very much present in contemporary South Africa, and the kind of systemic white-middle-to-upper-class complacency that seems to accompany this. I’m interested in self-criticism. I’m also interested in the subtleties of how South Africa has rebranded itself as both a post-colonial and post-apartheid state and how a multiplicity of individuals might or might not identify as citizens of such a state.

“So concepts such as nationalism’s failure within a hyper-modern, super-capitalist global economy; dead myths and delayed symbols; the politics of labour versus the politics of vacations; and the appropriation of international ethnic identities.”

Chloë Reid is an up-and-coming artist who embraces the uncertainty of both herself as artist and the practice of making art. This self-consciousness however, results in an almost obsessively executed aesthetic, which distinguishes her work. Reid is influenced by other artists’ work, as well as literature and literary theory. Her new work however, is concerned with not thinking about thinking about art, and rather allowing for a loose exploration of the space between idea, medium and creation.

Levi’s Pioneer Nation is a unique 16-hour festival taking place in the heart of Johannesburg’s Braamfontein district on September 25. The interactive daytime programme will bring together 40 modern pioneers to candidly share their backstories, entrepreneurial insights and practical wisdom in 15-minute presentations.

Leading up to the festival, Levi’s has identified six pioneers for a series of video profiles. First up are Lesego Legoale and David Gumede, founders of the White Wall Boys.

A car is not just a way to get from one point to another, they believe. It’s something on which to pin your dreams and ultimately, a reflection of who you are. The White Wall Boys began after Gumede, inspired by the TV show Pimp My Ride, breathed new life into his parent’s rust-bucket Ford Cortina.

“That first car I did felt like a breakthrough,” says Gumede. “It’s changed a lot since those early days, and we’re getting better every day while striving for perfection.” Today, Gumede and Legoale have made it their business to sculpt dream rides from stock standard commuters.

Rookie review: I’m made out of plastic here

Limits and freedom of non-free art

Where there’s an ironclad will, there’s a way for Alatise