A painter’s writing is off the wall 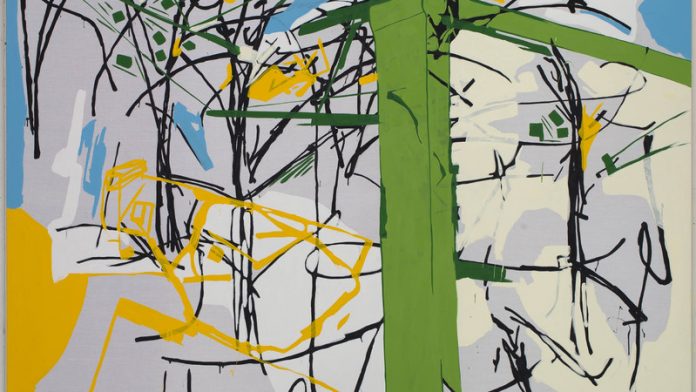 Where are you as you sit down to read this article? How do your surroundings make you feel? Are you at peace? Anxious? What’s your place in your space? These are some of the questions that Quinten Williams encourages you to explore through his installation Painterly Accumulations Off a Wall.

Williams is fascinated by spatial interactions. “I think it’s one of the primary questions that have engaged humans for millions of years: What is my place here? How we move through an area is something that concerns us as much as any other psychological or spiritual issue.”

Painterly Accumulations is Williams’s own response to these questions, but, as an artist, it has another purpose for him. One of the joys of painting that has captivated him for years is how the process involves manipulation; it’s the physicality of the activity that attracts him, the chance to work with or against a medium, the material aspect of stretching a canvas, the moments that arise as you bring ideas and expressions to play.

In creating this installation, Williams has had a chance to reflect on the process, to immerse himself in methodology. This is, for him, one of the key outcomes. Although he acknowledges that few viewers will be aware of the mental meanderings this installation has prompted, they are likely to see the results.

Williams says each of his exhibitions has built on its forerunners — (An Uncertain Encounter Outside a Shop (2013), Some Combinations (2012) and Environments (2009) — so his current grapplings with canvas are likely to manifest in his next show. “This has given me the ability to bring together materials in different situations and different ways,” he says — a reference to the fact that it might be impossible to imagine something new, but it is certainly within our scope to reimagine our realities.

This is something he has striven to prompt through Painterly Accumulations. “It doesn’t matter to ?me if a person isn’t familiar with the discourses around painting, the ?fact that everything has already been done and so, really, all we can do ?is add to what already exists,” he says.

What does matter, though, is that his own process — the thought that inspired him to layer an object so that it transforms from something overtly recognisable into an altogether more abstract concept — might jog a memory or sentiment in the viewer’s mind.

He enjoys the notion that people might be encouraged to engage with the questions, just as he does. Seeing his work spark an effect would be his ultimate prize, even if the feeling isn’t necessarily positive. In fact, Williams is comfortable with the ambiguity his work seems to engender. Some people experience the bright colours on the canvases as joyous, he reports, others find them jarring.

So, how does he see them? “For me, there’s a bit of both. They are forces challenging each other on a surface.”

A fair answer; one that mightmake a suitable description for ?an experience of life itself. This is how Williams has approached the work: a snippet of philosophy read here has played against an image that lingers in his mind and an emotion evoked by a cityscape; and he’s brought each of these elements into conversation through the paintings.

He likens each of these elements to “snapshots”, and notes that it’s the intersections between each, how they are combined, that interests him most. Thus, the installation — and the individual paintings at its heart — are not intended to present answers; rather, they are best thought of as a moment in time.

Williams is looking forward to working further with this concept of combinations; how painting can bring together seemingly disparate elements. “It’s thinking about the complexity of environments — the process gives me the chance to explore these complexities.”

Why is this important? “It creates moments I — and hopefully others — can respond to.” His answer reveals his belief that he is not an authority on his work; he views it as something extrinsic, in the way that music is something that lives on outside of the musician’s mind.

“A city is made up of many different encounters, and this exhibition is just one of them. Just up the road from this gallery, someone is washing a car, someone else is having an argument — those, too, are encounters.

The question I’m asking myself is how I can take these encounters, using them as material conglomerations, to make new combinations.

“It’s often said that painters live apart from the world, but I believe that we are very much involved in it. Our job is to take these moments from the world and, from them, create moments people can respond to.”

In conjunction with the M&G Literary Festival taking place this weekend, the inaugural Friday Festival launches at The Orbit this evening at 7pm, and culminates in a “Meet the Authors” cocktail event at David Krut Bookstore on Sunday at 2pm. Quinten Williams’ work is available for viewing at David Krut Projects situated across the road from the bookstore until September 6. For booking details visit redballoon.biz/mglitvest

Broken Monsters: A concatenation of nanospaces

Okwiri Oduor unapologetic about being herself

The short’s a hit with fans

Brothers in War and Peace: The war that could have been