What the law says about police using violence 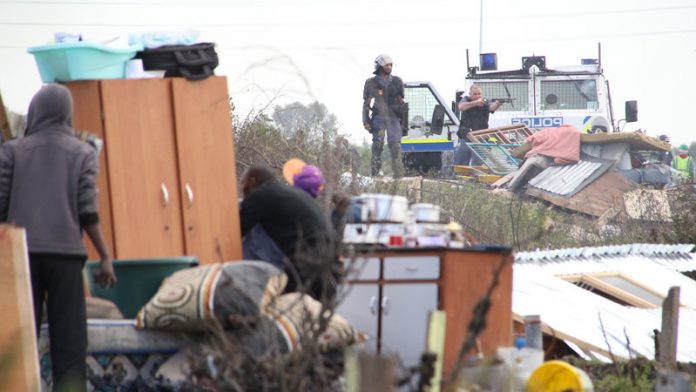 In August, at the Lwandle Commission of Inquiry, the South African Police Service (SAPS) were hammered for apparently waiving key requirements of the National Instruction for Public Order Policing while enforcing the South African National Roads Agency Limited’s (Sanral) controversial eviction of shack dwellers in June.

Few public order policing (POP) operations are as independently and as publicly scrutinised as happened at the commission. The aggressive cross-examination by the commissioners of POP commanders should serve as a reminder that the police are legally obliged to avoid the use of force “at all cost” when managing crowds and protests.

Fast forward from Lwandle to the sight of another eviction, violently enforced by POP, on August 22 at Philippi East’s Marikana informal settlement. Police officers fired rounds of rubber bullets and tear gas canisters in running battles with residents who threw stones and resisted the demolition of their shacks.

The fighting went on for hours, with seventeen people arrested. During the course of the morning, POP officers also fired their service pistols at protesters; how many times and on how many occasions is not known. Thirty-year-old Patrick Sobutyu was shot in both legs.

The violence of this most recent round of Marikana evictions presents a failure – rather than a success – of public order policing. A successful operation, according to the national instruction (NI), is one which minimises the use of force, injury and loss of life. The NI prescribes a process of ongoing negotiation, building trust and conflict resolution, with the group being “managed”. Force must be avoided “at all cost”, and the police must display the “highest degree of tolerance”.

When force is unavoidable, it must be “minimal”, “reasonable in the circumstances”, geared towards “de-escalating” the conflict and applied only upon instruction from the commanding officer.

Regardless, the use of live ammunition is prohibited in crowd management operations. Yet, in the face of mounting evidence and a number of queries from township community publication GroundUp, the police are yet to provide an answer as to whether live rounds were used while enforcing the Philippi East evictions.

Initially, the police “adamantly” denied that live rounds were fired. This position was later changed to an “investigation” of the allegations only after video footage emerged of POP officers firing their side arms.

Allegations (and video footage) of police shooting live ammunition should not be difficult to confirm if protocol is followed. The NI requires that POP record “all actions and incidents” and that a “record is kept of each member’s equipment and ammunition”.

Moses Dlamini, spokesperson for the Independent Police Investigative Directorate (IPID), has confirmed that the police reported the use of rubber bullets but made no reference to injuries or the discharge of service pistols by POP in Philippi East on the morning in question. Notifying the directorate when force is used by POP is legally required by the NI.

“It’s a hangover from apartheid era policing, but one that is contradicted by legal mechanisms (like the NI) designed to check the use of force and hold officers accountable,” he says.

In a culture that closes ranks, investigations by the directorate can take months to complete; such as the lingering investigation into the murder of Letshekang Thokoane, a protester beaten by police and shot in the forehead with a rubber bullet at point blank range in January last year.

IPID learned of Sobutyu’s shooting through GroundUp’s reporting. On August 28, Dlamini said the directorate would “investigate”.

Sobutyu, still unable to walk and recovering in a backyard shack in Delft, is waiting for the directorate to make contact.

“It upsets me, because I know that the man who shot me will probably get away with it,” says Sobutyu. “But, I did not get away. I cannot walk, I cannot work and this means I can no longer provide for my family.”

This story was originally published on GroundUp.