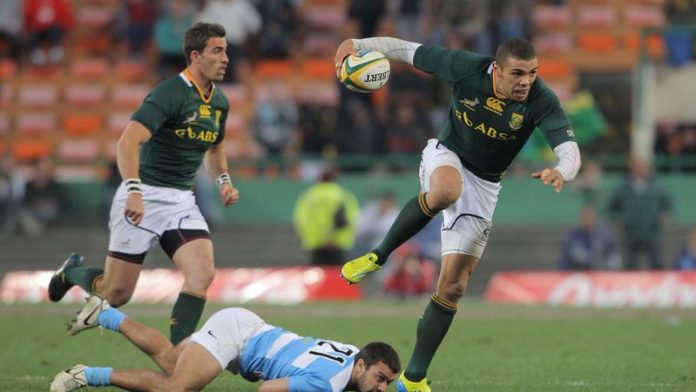 South Africa on Wednesday overhauled their team for the clash against Australia this weekend, making six changes for a game in which Bryan Habana will reach the 100 Test milestone.

The Springboks survived a scare against Argentina in their last Rugby Championship outing last month, bouncing back from 12 points down to edge the match in Salta 33-31. The scrums were a problem for the two-time world champions and coach Heyneke Meyer made four changes to his pack for Saturday’s match.

He is bringing in Marcell Coetzee, veteran Victor Matfield, Adriaan Strauss and Tendai Mtawarira. He also recalled Jan Serfontein and the experienced Morné Steyn to the backline.

“We were always planning in moving our personnel around during the competition,” said Meyer ahead of the match in Perth against a Wallaby side reeling from a 51-20 humiliation by New Zealand. “The only new player in the team is Warren [Whiteley], whom I’m very happy for and excited to see what he can do. He covers all three positions in the loose trio and can make an impact later in the game.

“It’s also good to see Pat [Lambie] back in the frame. He’s completed his comeback from a long-term injury and will provide necessary bench cover for fly-half and fullback.” With Australia desperate to recover from their flogging by the All Blacks, Meyer said that would pose an even bigger threat than normal.

“Saturday’s Test against Australia will take a massive effort from every member of our squad,” he said. “We’re not looking at their recent result against New Zealand and we know they will be a tough opponent.

“Similarly, we need to move on from our victories over Argentina, which are now in the past. This is a new challenge and one we have to overcome to stay alive in the competition.”

Habana’s milestone
The match will mark Habana pulling on a Springbok jersey for the 100th time, only the fourth South African to reach the milestone after Percy Montgomery, John Smit and Victor Matfield.

The 31-year-old winger, who made his debut against England at Twickenham in 2004, holds the record for the most Test tries (56) for South Africa, placing him fourth on the all-time international list.

“This is an unbelievable achievement by Bryan, who is someone every South African can be immensely proud of,” said Meyer. “Bryan is a true professional and someone who never gives anything but his best, on the field and off it. For him to reach this magnificent milestone is just reward for years of dedication and hard work.”