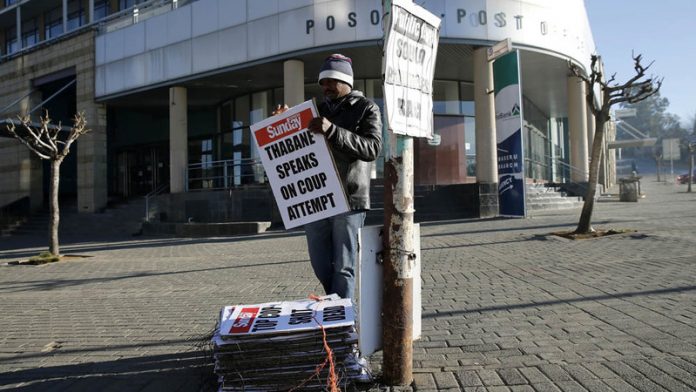 Embattled Lesotho Prime Minister Tom Thabane admitted to feeling much safer in the presence of South African Police Service and intelligence agency personnel. Thabane is back in his country’s top seat, thanks to foreign security agencies from South Africa.

“It is the police and an element of the intelligence services,” Thabane said in a telephone interview with the Mail & Guardian on Thursday afternoon. “They are not only around my residence, they are all over the country and in police stations where there was instability,” he said.

But he is still the boss of Lesotho, he said.

“I am in charge of the country. I am at the state house now. The only difference is that at the gate it is South Africans, but they will leave as soon as things are stable.”

Although he failed to convince President Jacob Zuma to send the South African National Defence Force to secure his leadership of Lesotho, he said he was satisfied that he was receiving assistance from South Africa.

Personal escort
Thabane, who was escorted home by South African police and a delegation of politicians chosen by the government of South Africa on Tuesday, said he hoped to have his own country’s police and army returning to their duties of securing the country soon.

“We need to move fast because the mission here is for a limited period, just to pave the way for us to reopen Parliament and bring things back to normal.”

Thabane fled to South Africa for three days after fleeing his country before dawn last Saturday when it became clear the army would try to topple him.

But on Thursday he said agreements reached through the mediation of SADC in Pretoria on Monday were already being implemented.

“I just had a meeting with the speaker of Parliament and he is looking at the logistics and the date of reopening Parliament,” he said.

“There are no people coming in and out like they would normally do, but this is necessary because there is a security threat.”

Police and army
Thabane admitted that it was wrong for political parties in Lesotho to allow the police and the army to get involved in politics.

Lesotho police supports Thabane whereas the army supports Deputy Prime Minister Mothetjoa Metsing of the Lesotho Congress for Democracy, a coalition partner with Thabane’s All Basotho Convention and the Basotho National Party, led by Thesele Maseribane.

“We have had a bit of a tainted past. We had started on a good note when we got independence from the British, adopting a democratic system of separating politics and security agencies,” Thabane said.

“But at some point we had a state of emergency when the party that lost elections used the army. That culture of having politicians making those mistakes is the one that brought us here.”

Thabane admitted he had been caught off-guard by last weekend’s attempted coup.

‘Surprise’ coup attempt
“I must confess it took me by surprise. It came as an unpleasant surprise because I thought we had been engaging on issues that we disagreed on,” he said.

“I am very disappointed.”

He did concede, however, that there was a “build-up” towards a possible coup over the past six months as ­coalition partners struggled through one disagreement after another.

Although there is widespread doubt about how long the shaky coalition can hold, Thabane insisted that only after the elections in 2017 would the government of Lesotho change.

In spite of the tension, Thabane said coalition partners governing the country had little choice but to swallow their pride and put the country first.

“The trust is not negotiable. You have to carry on the work. As coalition partners we don’t have to kiss each other. There are agreements and principles and if those principles are adhered to we can run a clean government.”

Coalition decisions
Asked whether he regretted suspending Parliament in June and taking decisions on his own instead of with his coalition partners, which contributed to the rising tensions in the country, he said: “No, not at all. The processes that are unfolding now create a chance for all partners to negotiate better.

“We are all sober now and it’s partly thanks to the suspension of Parliament.”

Lesotho, a mountain kingdom landlocked by South Africa, has had several coups since independence in 1966. Thabane said he is determined to change that culture.

“If I live another five years or so I think this should be the last incident of this kind in Lesotho. It will be like a pimple that comes on your face. When you get treatment for it, it disappears and you remain with your beautiful face.”

There was no relationship between the uprising and Kamoli’s firing, Thabane said. “It is a coincidence. The reality is that we have done this [fired Kamoli] constitutionally.”

In the early hours of last Saturday the Lesotho army raided police headquarters and the main station that houses the police’s special operations unit. Thabane’s official residence was also surrounded by soldiers. Lesotho’s coalition government still has three more years in office before the next elections.