Modise’s family gun for the wrong man at arms commission 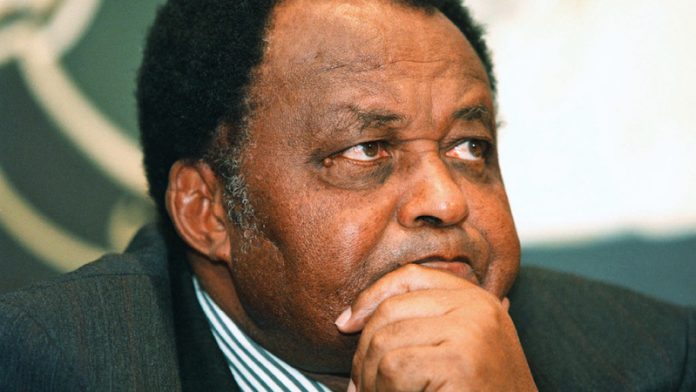 Judging by the tenor of events at the arms deal commission on Wednesday, Joe Modise’s family has longed to confront his accusers for some time. On Wednesday, Judge Willie Seriti granted the deceased minister’s wife, Jackie Sedibe, and one of his daughters an opportunity to do just that.

The only problem was that Modise’s accuser, former Inkatha Freedom Party MP Gavin Woods, was not really his accuser at all.

Woods was chairperson of the standing committee on public accounts (Scopa) during the early investigations into the arms deal. He and Andrew Feinstein resigned as a result of ANC interference in Scopa’s investigations.

Woods gave evidence this week at the arms deal commission, under subpoena.

He made a number of submissions, including that he felt that Modise benefited from the deal. But the context of Woods’s submissions is important: he said on Wednesday that he did not know why he had been called as a witness, as he had no direct, first-hand knowledge of any allegations of fraud or corruption.

Still, Woods said, he would try to assist the commission by providing it with whatever information he had about the deal. He presented a number of newspaper clippings and was then lambasted by opposing lawyers for failing to provide “evidence”.

As Woods stated, that was not his intention to begin with, and he could not provide evidence, even if he wanted to

Evidence from official investigations
Enter Modise’s widow and daughter, announced by advocate Jennifer Cane, representing the department of defence. The two had no legal representation.

The family members both confronted Woods, challenging him to provide “concrete evidence” that Modise had “benefited” from the deal in any wrongful way. He could provide none.

Perhaps the accusers who the two were looking for were really investigators from the National Prosecuting Authority (NPA) – in the form of the Scorpions – and British and German investigators. (Only one former Hawks investigator is on the Seriti witness list.)

Their investigations were either terminated or shut down but there is a great deal of evidence stemming from these official investigations that puts Modise’s private business dealings at the centre of the arms deal.

It is not clear whether Seriti has access to all the documents from these investigations.

According to the allegations, Modise acquired shares in a company called Conlog Holdings, which stood to benefit from the arms deal through the offset component. The NPA told Parliament in 2009 that it was looking at the Conlog deal. (The investigation was later shut down.)

According to DefenceWeb, the NPA told MPs that it was looking at the private interest Modise and “certain other officials involved in the arms acquisition process” held in Conlog, a “company which benefited from arms deal contracts”.

Bid to freeze adviser’s assets
By February 2008, the NPA said there was “sufficient suspicion of the commission of offences of at least corruption and money laundering to declare a full investigation”.

Then in 2010, the Mail & Guardian gained access to documents used by the NPA to try to freeze the assets of Fana Hlongwane, Modise’s adviser. Hlongwane moonlighted as a consultant for BAE Systems, a winning arms deal bidder.

The M&G reported at the time: “And other documents obtained by the Mail & Guardian reveal for the first time that former defence minister Joe Modise received large, unexplained deposits in his account held at the obscure Habib Overseas Bank in Fordsburg”.

Between February 1999, when he was still defence minister, and November 2000, Modise received deposits totalling R1.68-million, of which R600 000 was in cash.

“BAE was selected as preferred bidder to supply Hawk and Gripen fighters in November 1998 and the final contracts were signed in December 1999. Most of the cash deposits were marked ‘as instructed’…”

The origin of the payments was unclear but authorities clearly thought it a paper trail worth following.

These documents also detail many payments received by Hlongwane from accounts registered offshore.

City Press reported in 2011 that Hlongwane was “dumped” by BAE and acrimonious arbitration proceedings followed. These revealed that BAE threatened to recoup about R24-million in “consultancy fees” paid to Hlongwane if he was ever convicted of bribery. BAE appeared nervous about the bad press he was receiving in South Africa and Britain.

Potential big beneficiary
On Wednesday, Sedibe put it to Woods that Conlog was not part of the arms deal.

Woods responded that Conlog was listed as a potentially big beneficiary of offset deals in documentation now before the commission.

Seriti did not intervene but there is more to this point than either Woods or Modise’s wife provided.

Phil Soucy, a London spokesperson for BAE Systems, said in 2002 that the company removed Conlog as a potential beneficiary of arms deal offset programmes once it discovered that Modise was a shareholder.

So he might not have benefited in this way, but he would have done so had BAE not removed Conlog from its list of beneficiaries.

Modise’s name also crops up in a controversial report commissioned by Ferrostaal, another winning bidder, and compiled by the law firm Debevoise & Plimpton (D&P). The report is not before the commission because Seriti did not allowed it to form part of the evidence.

The report details the hiring of consultants to “advise on the submarine contract”. The D&P report found that these consultants were paid to give Ferrostaal “political access” to assist in winning contracts. Modise is listed as one of the role players introduced to Ferrostaal by one of the consultants.

Two other consultants named by D&P would later crop up in another document, leaked to the press: Modise’s will. One was listed as a consultant, the other as a trustee of Modise’s listed trust, the Letaba Trust.

The deafening silence on rape in MK camps lingers