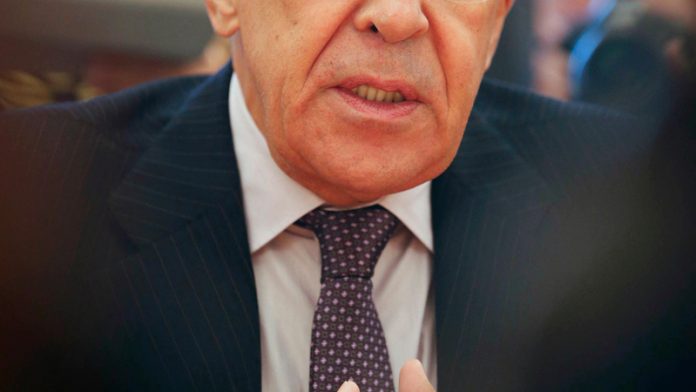 Russia’s foreign minister warned Nato not to offer Ukraine membership of the alliance as it gathered for a summit on Thursday, and told the United States not to try to impose its will on the former Soviet Republic.

Sergei Lavrov also urged Kiev and pro-Russian rebels fighting Ukrainian forces in eastern Ukraine to back peace moves outlined by President Vladimir Putin, and avert what he said could be a large-scale crisis in the heart of Europe.

Putin unveiled the seven-point plan on Wednesday, on the eve of a Nato summit in Wales, at which the crisis in Ukraine will be discussed.

“It is precisely at such a moment when a chance has emerged to start solving specific problems between Kiev and the militias that some sections of the Kiev authorities make demands for Ukraine to drop its non-aligned status and start joining Nato,” Lavrov said at talks with the Organisation for Security and Co-operation in Europe, a rights and security group.

“It’s a blatant attempt to derail all efforts aimed at initiating a dialogue on ensuring national reconciliation.”

Moscow has long said it will regard Nato membership for Ukraine as a national security threat.

US wants to ‘dictate its will’
Underlining Moscow’s concerns about US influence on Kiev, Lavrov said: “Some of our Western partners, including unfortunately the most influential players – the United States – want victory for Nato and a situation where America dictates its will to everyone.”

“This concept of exclusivity, which President [Barack] Obama has repeatedly declared, can lead to no good and has so far led to no good,” he said.

Lavrov promised Russia would take “practical steps” to de-escalate the crisis in Ukraine and urged Kiev and rebel leaders to accept Putin’s proposals for a ceasefire.

“We hope that the calls [by Putin] will be heard, especially by Kiev, [and the rebel leaders of] Donetsk and Luhansk,” he was quoted as saying by Interfax news agency.

Increasing international pressure
Meanwhile, British Prime Minister David Cameron said pressure would ramp up on Russia if it did not curtail its actions in Ukraine, which he described as unacceptable.

Speaking ahead of the Nato summit, Cameron told BBC television that sanctions imposed against Russia had already had an effect.

“We need to be absolutely clear that what is happening here is unacceptable, Russian troops on Ukrainian soil,” he said.

“And Britain, with others, has pushed and achieved a whole set of waves of sanctions. What Russia needs to understand is if they continue with this approach in Ukraine, this pressure will be ramped up.” – Reuters