Zuma’s lawyer was embroiled in Aurora 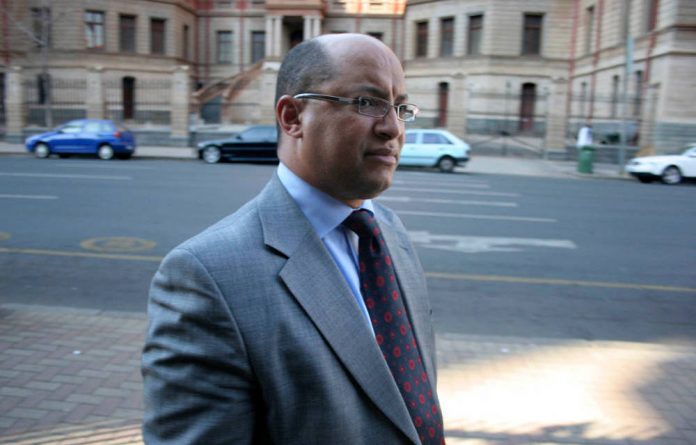 New evidence in the Aurora Empowerment Systems court case suggests President Jacob Zuma’s personal attorney Michael Hulley was far more deeply involved in the failed business than he has previously made out.

Court documents suggest that Hulley was involved in setting up an encounter between Zuma and potential Chinese backers of Aurora.

The negotiations apparently started in August 2010 – at the same time Zuma was in China on an official state visit (see accompanying story below).

The allegations are contained in an affidavit by former Aurora director Thulani Ngubane, lodged in the high court in Pretoria early last week.

Ngubane and his fellow Aurora directors – the president’s nephew Khulubuse Zuma, Zondwa Mandela, and controversial father-and-son team Solly and Fazel Bhana – are defending a R1.7-billion claim brought by liquidators of the two Pamodzi gold mines Aurora was tasked with managing.

The liquidators accuse the Aurora five of “manag[ing] the affairs of Aurora recklessly, with the intent to defraud” the liquidators and creditors of the Pamodzi companies.

The application seeks to have them declared personally liable for the nearly R2-billion debt owed to Pamodzi. The case was postponed until early next year.

Hulley is not included as a respondent in the case. He has insisted that any reference to him being an Aurora non-executive director is incorrect. He claimed Zuma and Mandela approached him early in 2009 to join Aurora’s board as a nonexecutive director, an invitation that he turned down.

‘Legal advisor’
Hulley told a commission of inquiry, set up in 2011 to interrogate Aurora’s management of the two Pamodzi mines, that he was brought in to advise Zuma “in his professional capacity as attorney in respect of the affairs of Aurora”.

But he admitted that as Aurora’s inability to obtain funds worsened, he became much more “intricately” involved in the business. He did not provide details.

By contrast, annexures to Ngubane’s affidavit suggest that Hulley was an active director and member of the board.

Khulubuse Zuma, who has opted for separate legal representation and submitted his own affidavit, also claims that he [Khulubuse] was not “responsible for the day-to-day management and running of the affairs of Aurora”.

Zuma states in his affidavit that he “reasonably relied on the information relayed to me”.

He has also always dismissed claims that Hulley was ever a registered director of Aurora, reportedly explaining to the commission of enquiry that it was only in March 2010 – when Aurora’s public image was in tatters – that he called on Hulley’s help.

In March 2010 at least 5?300 mine workers – who had not received salaries since Aurora took over in October 2009 – downed tools, bringing operations at both mines to a standstill.

Zuma reportedly said he had “requested” Hulley become more involved and to “assist him and the Aurora board in addressing the issues that confronted Aurora at the time”.

Reassurance
Yet the nature of Hulley’s position has never been fully explained and was a source of confusion at the commission of inquiry. Deon Botha, one of Pamodzi’s liquidators, claimed in a 2011 affidavit that liquidators found “great comfort” in the lawyer’s name appearing on Aurora’s bids.

Botha said that “by all accounts Hulley was to be responsible for the corporate governance and compliance aspects of Aurora and the Pamodzi transaction”.

But others told the commission that Hulley was a nonexecutive director.

During the commission Mandela, who allegedly signed off on the bids for the Pamodzi mines, reportedly testified that the information contained in the bid documents had been reviewed by “the directors and Mr Fazel Bhana, Solly Bhana and Michael Hulley”.

An email annexed to Ngubane’s affidavit suggests that Hulley’s connection with Aurora goes right back to mid-2009, when the company put in its second bid for Pamodzi’s East Rand mine.

The email from Hulley, dated August 17 2009 and sent to Fazel Bhana, contains an attached copy of Hulley’s CV. His email explained: “Please find document as requested.”

Two other documents annexed to Ngubane’s affidavit also suggest Hulley was involved in making executive decisions from early January 2010. His signature appears on two resolutions taken by “the board of directors” of Aurora Empowerment Systems.

Aurora was planning to reverse-list into JSE-listed Company Labat Africa in order to satisfy a condition prescribed by potential investors that Aurora should be listed on the Johannesburg Stock Exchange. Hulley, along with Mandela, Zuma and Ngubane, was appointed to Labat Africa’s board. They later stepped down when the deal crashed.

Signature
Two resolutions, dated January 8 and 26 2010 and authorising the transfer of Labat Africa shares, are signed by Hulley, Zuma, Mandela and Ngubane.

One notes: “The Company [Aurora] will deliver such shares once the Company has beneficial ownership of sufficient Labat shares to transfer.”

From evidence annexed to Ngubane’s affidavit it appears that from at least March 2010 Hulley was involved in a range of other matters at Aurora, including:

? His apparent involvement in managing the company’s image through press releases.

? His name as a nonexecutive director is listed on all Aurora letterheads contained in the annexures.

? Zuma and Hulley paid Protea Coin Security directly to keep them on site because of allegations of rampant illegal mining.

? He received queries by email in mid to late 2010 in relation to the payment of auditors’ fees, when he, Ngubane, Mandela and Zuma were appointed to Labat Africa’s board.

? Hulley appears to have been the Shandong Gold Group’s point man in its communications on a due diligence the state-owned entity wanted carried out on Aurora in early 2011.

The annexures also refer to negotiations during 2010 and early 2011 between Aurora and the Shandong Gold Group, in great detail.

In a January 12 2011 email to Hulley from Johan Matheson from PwC Beijing, who was carrying out a due diligence on Aurora on Shandong Gold’s behalf, asked Hulley to provide information including items “such as the most up-to-date financial statements, fixed asset registers, tax returns and correspondence, mining licences, agreements between Aurora and the liquidator, and ongoing management reporting”.

Detailed questions were put to Hulley on Tuesday this week but had not been answered by time of going to print.

A 2010 email by a middleman to President Jacob Zuma’s lawyer, Michael
Hulley, suggests inviting the premier of China’s Shandong province and representatives of a company owned by the Shandong government to a meeting with Zuma during a state visit.

Whether the meeting, proposed for August 25 2010, took place remains unclear.

Presidential spokesperson Mac Maharaj was asked whether Zuma met the Shandong premier and a delegation from the state-owned Shandong Gold Group but had not replied by the time of going to print.

But amaBhungane has confirmed that on August 25 2010 Zuma was in Beijing, where he gave a lecture to the Renmin University and later addressed a media briefing.

One of Aurora’s directors was the president’s nephew Khulubuse Zuma, which means that any intervention by the president to bolster the company’s finances would have left him deeply conflicted.

The president has already been implicated in meeting an ­international investment group, Global Emerging Markets (GEM), which later put $2-million into Aurora.

The money subsequently disappeared and is the subject of a court case.

Annexures to an affidavit tabled in court by Thulani Ngubane, also an Aurora director, include an August 17 2010 email message from Mpisi Trading 74 employee Alex Ni.

Huang previously brokered a deal between Khulubuse Zuma and Chinese vehicle manufacturer Dong Feng Motor Corporation to distribute its products in South Africa and the rest of Africa.

Ni thanks Hulley for their last meeting and proposes inviting “the premier of Shandong province and Shandong Gold Group delegation to have a meeting on 25th of August, during the time of President Zuma’s visit in China”.

“Our co-operation is showing the good relationship between China and South Africa and it strengthens the trading co-operation between these two countries.” Ni also notes that for “procedure processes” Hulley should “kindly use” an “Aurora company letterhead or Khula [Khulubuse Zuma] personal name to write the invitation letter for the meeting in Beijing on 25th of August”.

At the end of his email Ni apologises to Hulley for his “poor English”.

Also contained in the annexures is a November 24 2010 ­letter addressed by Shandong Gold Group’s chairperson Wang Jianhua to the liquidators highlighting Shandong Gold’s intention to invest $100-million in exchange for a 65% equity stake in Aurora, while the Chinese company would operate the Pamodzi mines Aurora had been tasked to manage.

It notes that over the past four months “we have been in negotiation with Aurora with a view to acquiring an interest in Aurora and in so doing to the assets currently in provisional liquidation.

“This has meant extensive discussions, consultations, inspections, sampling and due diligence with a view to finalising the acquisition. We are intent on finalising the agreement during the course of the week of 29 November 2010 when our team will be present and hosted in South Africa by Aurora.

“Despite the challenges which Aurora has faced in finalising the transaction, we are committed to partnering with them in building a sustainable business through the application of capital and our extensive experience in the gold resource sector.”

Wang’s letter also notes that negotiations between Shandong and Aurora had been under way since August 2010.

‘Nice to meet you’
There are further communications between Hulley and Shandong Gold. After the company visited South Africa in December 2010, for example, he received an email on January 12 2011 from Shandong Gold’s financial analyst, Zhang Zaiqian. Zhang writes that it was “nice to meet you in Johannesburg”, adding that Shandong Gold was keen to get the deal with Aurora moving “quickly”. He also copies officials from PwC Beijing, a Chinese company appointed to carry out the due diligence.

The overtures to potential Chinese backers followed the failure of the GEM initiative, which had left Aurora in deep financial straits.

In April 2010, Hulley announced that GEM had agreed in principle to advance up to R725-million to Aurora through the purchase of shares, provided the latter listed successfully on the JSE. Aurora tried to list on the JSE by buying Labat Africa – a small listed technology company led by former rugby administrator Brian van Rooyen.

But Aurora struggled to meet the conditions set by Labat and the JSE, and the listing, through a takeover of Labat, had not occurred by July 2010.

GEM director Chris Brown claimed to have met President Zuma on July 10 2010, and that the meeting gave GEM the confidence to invest in Aurora.

But by the time the meeting took place, Aurora was in severe financial difficulty and was facing fierce public criticism about its interim management of the Pamodzi mines and failure to pay workers. – Sally Evans