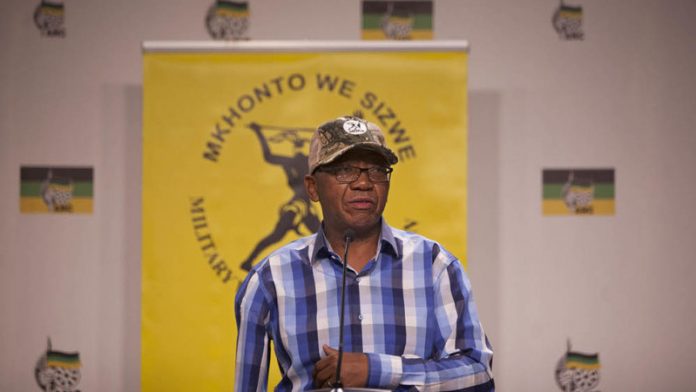 With a nod and a wink the former armed wing of  the ANC on Monday said public protector Thuli Madonsela sure acts as if she is a spy. The US is not amused.

Accusations that are not quite accusations (yet strongly imply while trying, and failing, to not directly say) that the public protector is in the pay of the CIA became a diplomatic incident on Monday – despite a peculiar dance by a deputy minister.

US ambassador to South Africa Patrick Gaspard said he would lodge a formal diplomatic complaint about comments on the weekend by Deputy Minister of Defence Kebby Maphatsoe that Madonsela is a CIA spy.

Maphatsoe reportedly told an unveiling ceremony on Saturday that Madonsela should tell the country ”who her handler” in the foreign intelligence agency was.

It is a significant escalation in what’s become routine attacks on Madonsela from ANC officials, since she stated President Jacob Zuma had benefited unduly and acted unethically on the upgrades to his Nkandla residence. It is the first such attack with formal consequences beyond South Africa.

“How can a [government] minister make such scurrilous and political comments at an official event?” asked Gaspard on his official Twitter account.

‘Strange dance’
In a peculiar press conference on Monday morning, Maphatsoe seemed to be indirectly rolling back on the accusation. He then effectively made it again, then tried to frame it more delicately, and ultimately said that Madonsela was doing the work of the CIA, even if she was not actually its agent.

Maphatsoe did the strange dance as the chairperson of the Umkhonto we Sizwe Military Veterans Association (MKMVA), making the point that he was not acting on an ”official” platform.

In a written media statement under Maphatsoe’s name, the MKMVA did not directly accuse Madonsela of anything, but hinted that she worked in intelligence. “If Advocate Thuli Mafonsela [sic] feels more powerful and above the constitution, she should tell the country, who her handlers are?” the statement read.

MK membership
Likewise, the statement did not accuse Madonsela of having falsely claimed she had been an MK fighter, as Maphatsoe reportedly said on Saturday, but made general points about “peacetime freedom fighters” who “besmirch the name of MK and ANC”, while expressing interest in proof that Madonsela had been active in the armed struggle.

Pushed on the allegations, the panel of MKMVA officials hardened the allegation on Madonsela’s MK history, saying investigation had showed “she was never ever a member” of MK. On her status as a traitor in the pay of a foreign government, however, it was far more coy.

Maphatsoe initially referred questions on the CIA allegation to another official, who vouchsafed that Maphatsoe had not, in fact, made such an allegation – but that “nothing is impossible” when it comes to the mechanisms used by intelligence agencies, even though proof that a spy is a spy is hard to come by.

Pushed again on the matter, Maphatsoe himself ventured a careful phrasing, not mentioning Madonsela by name. “We know how foreign intelligence works,” he said. “They create their own person and popularise him or her. That’s how they work. They create you, including in the media … That’s what they’ve created now.”

Later Maphatsoe allowed that such a person might be unaware that they were “working for the enemy”. Ultimately, he settled on proof by way of action, saying Madonsela’s actions were “actions of an enemy agent”.

‘Imperialist forces’
The MKMVA has long held that “imperialist forces”, including the CIA, is bent on toppling the ANC government to open South Africa to exploitation. Attacks on Zuma by way of Nkandla represented such an attempt at regime change, it said on Monday.

Asked for proof of her MK credential and a response on the CIA accusation, Madonsela issued a short statement. “The Public Protector has decided not to fully comment for now, except to say that a letter is being prepared to ask Mr Kebby Maphatsoe to retract his accusation in 72 hours and apologise or provide incontrovertible evidence on his accusations.

The Act that created Madonsela’s office makes provision for criminal charges of contempt to be brought for any insult to her or her deputy, or for actions that inhibit her ability to conduct investigations, with jail time or a fine stipulated as punishment. Madonsela has never invoked those powers, saying she prefers not to take matters of her office to the courts.