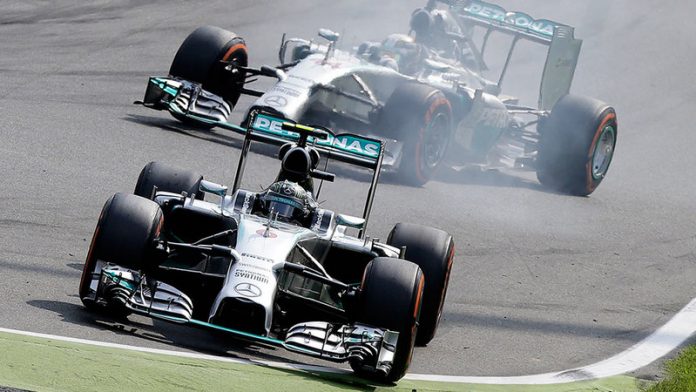 Nico Rosberg’s error under pressure at Monza has opened a gap for Lewis Hamilton, while fuelling some conspiracy theories in the battle for the Formula One championship.

Rosberg admitted that his mistake gifted his Mercedes teammate a victory at the Italian Grand Prix on Sunday, but said his second place was “not a disaster” – and certainly not deliberate. However, after the collision between the two Mercedes drivers in Belgium two weeks ago, for which Rosberg was reprimanded by the team and later apologised, Mercedes had to deny a suggestion it had engineered the outcome.

Some British newspapers highlighted comments by former three-time world champion Sir Jackie Stewart who wondered how Rosberg missed the same turn twice, fuelling conspiracy theories that the error was deliberate. “It was a part of the track where there was no real penalty for making that mistake so I am a little confused,” Stewart was quoted as saying. “I thought it was a bit too easy. I thought he could have at least made an effort to get round the corner but he didn’t.”

‘I just messed up’
However the team dismissed any suggestion it was trying to level things out after Rosberg ruined Hamilton’s race in Belgium. “I just messed up. What would be the reason for me to do something like that deliberately? There is no possible reason,” Rosberg said.

Rosberg said it was Hamilton’s pressure on him around the mid-way stage of the race that contributed to the error at turn one of the high-speed track. “Lewis was quick, coming from behind,” Rosberg said. “I needed to up my pace and then as a result just went into the mistake. That was very bad and lost me the lead in the end.”

Hamilton was quickest throughout the weekend and appears to have the psychological ascendency, even if Rosberg still holds a 22-point lead. “Is Rosberg losing his nerve?” Germany’s Bild newspaper asked, pointing out that in the “psycho game” between Hamilton and Rosberg neither looked at each other or shook hands after the race.

Hamilton suggested Rosberg did not like having pressure on him. “I knew that was the best time to put pressure on him,” he said. “I did it a couple of races ago and he doesn’t seem to like it so I’ll try it a bit more.” Rosberg’s error came shortly after Hamilton had been told by his race engineer to keep behind his teammate and save any overtaking attempts towards the end of the race.

“The car felt good and it was the closest I had been at that point,” said Hamilton, denying he had ignored team instructions. “The engineer said that I should stay back, but knowing from experience – particularly this year – I knew that that wasn’t the way forward, so I chose another route.”

Turbulence at Mercedes
Hamilton’s victory capped a turbulent two weeks for the Mercedes team, which enjoyed a seventh one-two finish this season. The team can now hope the pressure has been reduced ahead of the Singapore Grand Prix on September 21.

Ferrari’s home race was meanwhile a massive disappointment for the Tifosi – the team’s supporters. Fernando Alonso retired with a hybrid system failure while Kimi Räikkönen was ninth in the team’s worst result of the season. Williams have overtaken Ferrari in the constructors’ championship to go third after Felipe Massa finished third and Valtteri Bottas fourth, despite a poor start from the Finn.

In a country with more than 35 000 Covid-19-related deaths at the time of writing...
Read more
Sport

The South African is the only woman to ever win an F1 race, but her career was slowed down by political and financial barriers
Read more
Sport