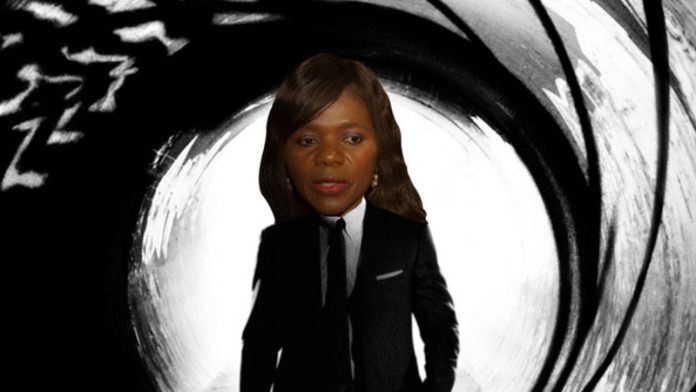 She may not have a top of the range Aston Martin to cruise around in or lose the odd tail with – imagine the look on several ANC members’ faces if she did? And who knows whether she takes her martinis shaken or stirred?

Several public appearances and press conferences prove that her attire of choice is not a beige coloured double-breasted trench coat. Maybe her handbag houses a magnifying glass. Maybe it doesn’t. And she certainly does not have robotic Inspector Gadget style arms that extend and can ply and prod.

Oh Hollywood … you. We’re not stupid. We know better than to take your James Bonds and Pink Panthers for granted. We know that real life spies don’t look all glitz and glam like they do in the movies and that’s sort of the point isn’t it?

If Thuli Madonsela did have any of these high tech thingies, it would be too obvious. The whole point of being a spy is that no one knows you are one. Except of course the odd person with a sixth sense – like Deputy Minister of Defence and Military Veterans Kebby Maphatsoe, who was able to call Thuli out on her CIA agent affiliations. No. Old Kebbers doesn’t have dementia. He really is just blessed with an augmented skill for spirituality and insight. (Claps once).

And thanks to him, it’s out there. Also, like he said, MK members are trained to spot “enemy agents”, “we know how foreign intelligence works and we are not just thumbsucking”, he said. Well, they say the truth shall set you free, so for us ordinary folk, who know little of the world of espionage and covert operations, here’s a list of five character traits (with the help of Google), that prove Thuli is in fact a spy.

1. Guts
The spy has to be immersed in the unknown and often dangerous situations. Armed with only skills and wit, spies have to maneuver their way out of these situations single handedly before finding themselves in yet another potentially harmful environment. This calls for guts. Thuli definitely has guts.

She fearlessly digs, uncovers and exposes. Often at the expense of much criticism and allegation at the hands of the ANC. But she soldiers on regardless. Thus, Thuli is a spy.

2. Intelligence
Spying is not for the feeble minded. There’s a reason Thuli sits at the throne of the public protector. She’s smart. She possesses the skills and abilities to develop and run many operations, operations as big as the Nkandla report. She applies what she knows and she’s also a quick learner who is able to adapt to each new operation and development with lightning speed.

She’ll internalise all of it, file a report and should the president pass the buck, she’ll apply her brain and send him a letter advising him to not ignore her recommendations. Thuli is intelligent, thus, she is a spy.

3. Creativity
Those Hollywood operatives need fancy gadgets that come with a lot of pomp and ceremony because they’re not effective problem solvers. They lack the creativity that’s necessary in the real world to be a real spy. Thuli suffers from no such problem. She calculates quietly, creatively and effectively. Even the tone of her voice is often a murmur, but the kinds of things that she says shout very, very loudly.

She employs and reinstates the terms of the Constitution over and over again, holding truth to power. When anyone accuses Thuli, she asks for proof. This may seem like the most uncreative thing in the world in the South African political climate, but like all creative things should be, it truly is inspiring. Thus, Thuli is a spy.

4. Observational skills
Thuli watches. She’s not quick with the trigger. She does not jump to conclusions. Like any spy worth their binoculars, Thuli is a keen observer. She collects the relevant information, she evaluates it, she thinks about it, and then she disseminates it. She has a quality few South African leaders possess, and that is the ability to pay close attention and then follow through after retaining and interpreting meaningful data.

She doesn’t blow smoke. She is the gun. And her ammo is research and accuracy. She’s professional in her demonstration of her observational skills, time and time again. Thus, Thuli is a spy.

5. Self-reliant
Watch her as she moves, from presser to presser. When she talks. When she delivers. No one has her back. Yeah she has a team, but that’s a bit different from having cronies to pick up after you, or have your back, or cover up your mess isn’t it? It is. Thuli doesn’t have cronies. And maybe it’s because she is in fact so good a spy, that she hardly ever leaves a mess, and thus doesn’t need any cronies to cover up for her. No passing the buck here. #sideeyesparliament.

Thuli is self-reliant – A necessary trait in the filed of spying. She keeps her composure, she works independently and she takes agency. If and where responses or reactions are necessary, she does so herself, composure in tact – without being influenced by the input of “superiors”. Thuli’s decisions are her own. Thus, Thuli is a spy.