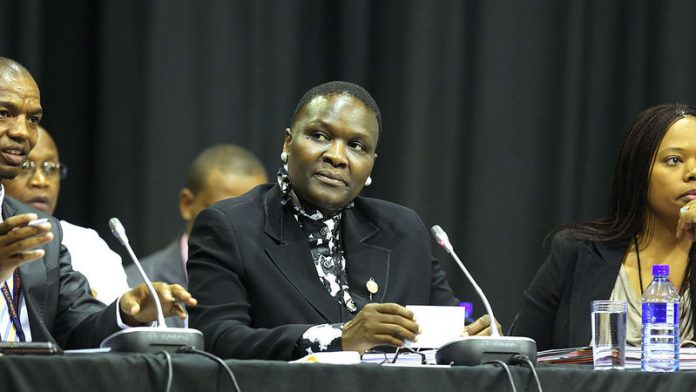 These rifles were used on August 16 2012, during the operation that led to the Marikana massacre, and they are still being used by public order police officers. Phiyega made the revelation under heavy cross-examination by retired judge Ian Farlam, who chairs the Marikana commission of inquiry, sitting in Centurion.

The expert, Cees de Rover, gave evidence at the commission. He told the police that using R5s was extremely dangerous and violated international policing best practice. This is for two reasons, as explained by Farlam on Wednesday. First, a bullet fired from an R5 rifle will travel for up to 600 metres after it is fired. The risk of injuring bystanders was therefore significantly increased.

As Farlam explained, “unless you know exactly what is behind your target for 595 metres…” Second, bullets from these rifles disintegrate. Farlam said this was the reason the commission had been unable to establish exactly which police officer shot at which miner on August 16. This makes holding individual officers accountable for killings at Marikana, and other operations like it, extremely difficult.

And at Marikana, Farlam said, one of those killed was a young man who went to the koppie to bring his uncle lunch. He was shot 200 metres away from “scene one”. Phiyega admitted that in spite of this, the police had not stopped using R5 rifles.

“I’m not even saying that the use of lethal force should not be allowed. I understand that. But my question is, why does it have to be an R5, which significantly increases the risk of injury? Why not an R1 or a pistol?” he said.

There was some confusion as to whether the R1 was more or less powerful than the R5 rifle. Farlam said expert testimony on the subject would be sought. Phiyega said the police was presently assessing its use of ammunition and said it would also abide by whatever the commission’s recommendations were in this regard.