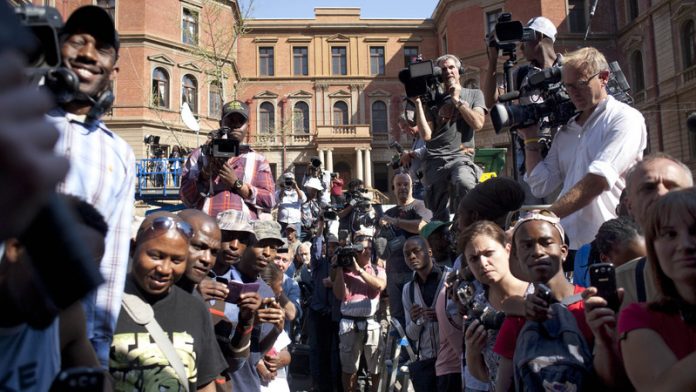 In South African law, premeditation does not require the crafting of a plan to commit murder, but can happen in an instant. The state had suggested Pistorius had decided to murder Steenkamp after an argument, which if proven could have met the test for premeditated murder.

The state failed to prove such a case, Masipa found. The evidence was purely circumstantial, and that circumstantial evidence was not compelling enough to met the accepted standard: that the court “must be sure that inculpatory facts are incompatible with the innocence of the accused and incapable of explanation” in any other way.

Pistorius had in fact provided a version of events not impossible, Masipa said, and although some unanswered questions in his version did raise her eyebrows when it came to probability, it was not the duty of an accused to convince the court he was telling the truth.

Murder, the killing of a person with intent but without premeditation, relies on the killer to realise he could cause death and act regardless. The state of the mind of he who pulls the trigger is the crucial factor in determining whether murder was committed.

Masipa found that there was nothing to suggest that Pistorius did not genuinely believe he was under threat from an intruder, and “the fact that the person behind the [toilet] door turned out to be the deceased [Reeva Steenkamp] and not an intruder is irrelevant”.

By the doctrine of dolus eventualis, murder can be committed when a killer realises the consequences of his actions – firing four shots through a door into a small space where he believes a person to be, for instance – can cause death, and acts nonetheless.

This is where Masipa lost even some of South Africa’s top legal experts. She held that Pistorius was genuinely distraught at having killed Steenkamp, so could not have intended to kill her. He could not reasonably have foreseen that his shots would kill Steenkamp, so he could not have said to have acted recklessly, and so was not guilty of murder by way of dolus eventualis.

The test for culpable homicide is an objective one, allowing for armchair analysis of actions against what could or should have been done, rather than trying to gauge the intention of the killer.

On the night he killed Steenkamp, Masipa said, Pistorius knew there was a person behind the toilet door, and used a lethal weapon nonetheless. He had time to “think, reflect, and conduct himself reasonably” rather than having to act in panic. He could have guarded against killing someone by calling for help by phone or from a balcony.

And Masipa found that Pistorius’s disability and other factors can explain his actions, but not excuse them.

A reasonable person in the same circumstances would have foreseen the possibility of causing death, she said, and would have guarded against doing so. He “acted too hastily and used excessive force”, and was clearly negligent, and therefor guilty of culpable homicide.

This much was agreed: a single shot was fired in a restaurant while Pistorius held the gun. How exactly that came to be was in dispute, with Pistorius saying he did not pull the trigger.

Masipa was not impressed by the proffered defence. What was relevant, she said, was that:

That, she found, was enough to convict him on the charge.

After Steenkamp’s death, police found rounds of 38 calibre ammunition in the safe in Pistorius’s home. He had no licence for that calibre weapon, giving him no right to possess the ammunition, and the state charged him with unlawful possession.

Pistorius said the ammunition belonged to his estranged father, an assertion not backed by any statement from his father. Nonetheless, his defence argued that he had never intended to possess the ammunition.

In her finding, Masipa posed a hypothetical situation in which having-in-hand is not the same as intentional possession: if a firearm owner left a gun somewhere and another person picked it up in order to return it, it would be an “aberration of justice” to convict the bystander for possession, she said. And she dismissed the fact that Pistorius’s father had not corroborated his version, saying it “does not assist at all” the state, which had the onus to prove its case.

Without any evidence contrary to Pistorius’s version offered by the state, Masipa said, the state had failed to prove intent to possess, and Pistorius “therefor can not be found guilty on this charge”.

Darren Fresco, at the time a friend of Pistorius (though presumable no longer) testified against the athlete on two of the lesser counts on firearms and ammunition. On one of those counts, the discharge of a firearm in a crowded Johannesburg restaurant, Fresco could have himself faced charges. His testimony was as a so-called Section 204 witness, which provides immunity in return for full and frank answers to questions.

For a short time things did not seem to be going Fresco’s way, with Masipa finding him to have been a dishonest witness. Roux, on behalf of Pistorius, had argued that his dishonesty meant he did not qualify for immunity.

But the dishonesty Masipa found was in relation to a different charge, that of Pistorius firing a gun through a car sunroof, a charge on which he was found not guilty. When it came to the restaurant incident, Masipa said, Fresco’s testimony was born out, and “mendacity on one aspect of a witness’s evidence does not necessarily mean that the rest of the evidence will be tainted. It simply means that caution is warranted”.

And so Fresco was granted his immunity, as Nel had argued he should, making him immune from prosecution for playing any part in endangering lives when a shot was fired in the restaurant, a crime for which Pistorius now faces sentencing.

Bail for Pistorius
Ruling: extended on the same conditions

Pistorius’s bail automatically expired when he was convicted, and he was briefly led to the cells at the high court in Pretoria while Masipa considered his fate. Had she decided not to extend his bail – as was expected, though by no means certain – he would have remained in custody until mid-October at least.

The onus to resist the extension of bail falls on the prosecution. Nel argued that Pistorius had sold all his immovable property, which could make him a greater flight risk, and that even his family considered him capable of “self harm”, with the implication that he could commit suicide, and so escape justice.

Masipa declared herself not persuaded, saying the explanation of the sale of the houses in order to pay legal costs “is satisfactory”, and extended bail accordingly. That leaves Pistorius relatively free, even in theory to travel abroad to compete in competitions, until he is due back in court on October 13 for arguments in aggravation and mitigation of sentencing.

Masipa did, however, instruct Roux to have Pistorius’s uncle Arnold caution him against further “incidents”, presumably of the type that in July saw him ejected from a night club and which led to the family statement about self harm.

From the early frontier wars against colonialism to the struggle against apartheid and in recent times the fight for economic equality, the culture of activism has evolved. But can it still be effective in bringing about change?
Opinion