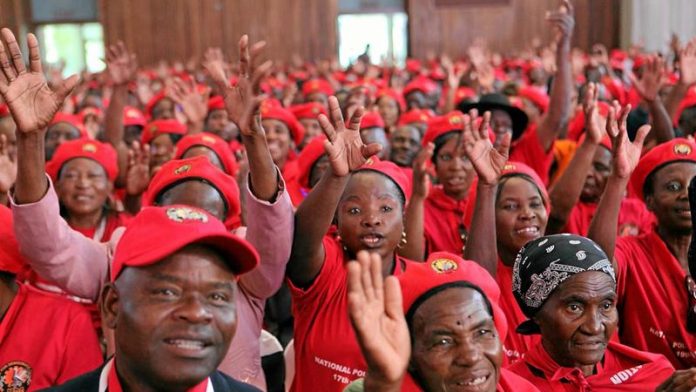 Zimbabwe’s opposition parties are in disarray and failing to take advantage of the serious infighting in Zanu-PF as well as the deepening economic crisis, by neither holding the ruling party to account over its electoral promises nor offering viable alternatives.

The biggest opposition party, the MDC-T, led by former prime minister Morgan Tsvangirai, is preparing for its congress, to be held in Harare on October 31 and November 1. But it is facing serious financial problems and is now locked in disagreements over amending its constitution to concentrate power in the hands of its presidency.

In addition, there is serious infighting in the party, which has led to a fallout between Tsvangirai and his deputy, Thokozani Khupe. Khupe and other senior officials, among them Nelson Chamisa and party spokesperson Douglas Mwonzora, are against a move by Tsvangirai’s loyalists to reduce the powers of the secretary general and concentrate powers in the presidency positions.

Changes to MDC-T constitution
A committee chaired by the party’s deputy chairperson, Tsvangirai loyalist Morgan Komichi, is moving around the country, collecting the views of party members over proposals to change the MDC-T constitution.

The proposals, which could be adopted at the congress, would see Tsvangirai being empowered to appoint the members of the party’s standing committee in a similar manner to how President Robert Mugabe appoints members of the Zanu-PF politburo. The proposals also seek to introduce two vice-presidents, as in the Zanu-PF system.

Officials who have seen the committee’s minutes say that according to the minutes, most party members support the move to amend the constitution. But the officials are sceptical of the committee’s motives and believe its members were coaching people on what to say, as well as doctoring reports.

Mwonzora confirmed the party’s lack of funds and the infighting, although he insisted the congress will proceed. He said the committee has completed its consultations and will table its findings and recommendations before the national executive next week.

“The so-called divisions are nothing new, because it is expected in any democratic party. Individual opinions do not matter; what matters is what the national executive says when it meets,” he said.

The national executive met in Kadoma last month, where several officials expressed concern over the move to amend the constitution, which they saw as being undemocratic. Among those who spoke out were Khupe, Chamisa and Mwonzora. Chamisa and Mwonzora are both eyeing the powerful secretary general post at the congress.

Mwonzora said should the national executive agree with proposals to amend the constitution, the matter will be taken to the national council. If that body agrees, the proposals will be tabled at the congress for adoption.

Finances
On the issue of financing next month’s congress, Mwonzora said: “We have looked and we are continuing to look for funds. I can, however, assure you that the congress is going ahead.” The new MDC-Renewal team, which recently rebelled against Tsvangirai, has also not been spared the power-jostling.

Biti and the MDC-T’s former treasurer, Elton Mangoma, led the rebellion but are now both vying for the top post. The officials have, however, denied the falling-out. The MDC-Renewal’s attempt to form a grand alliance with other opposition parties, which was supposed to be preceded by a national convention of democrats, is moving at a snail’s pace because of a lack of finances.

The convention of democrats, similar to the National Working People’s Convention of February 1999 that gave birth to the MDC, was meant to have been held by the end of May but is yet to be convened. Churches, students, trade unions and other stakeholders were supposed to be part of the convention.

Political analyst Dumisani Nkomo said opposition parties have betrayed Zimbabweans by fighting each other instead of uniting to fight Zanu-PF, hence their weak state. “What is apparent is that they did not do a proper postmortem after the election and therefore there was no proper strategic repositioning. In fact, I would argue that the opposition is weaker and more fractured today than it was, say, in 1995,” he said. “They are spending time attacking each other instead of tackling Zanu-PF and issues affecting Zimbabweans.”

University of Zimbabwe political science lecturer Dr Eldred Masunungure said as long as opposition parties are divided, they will not be able to capitalise on Zanu-PF’s failures or address matters of concern. He said opposition parties have not recovered from their heavy defeat last year, and some may have given up.

“It’s also difficult because of the internal convulsions in the opposition parties. The virus that is afflicting Zanu-PF is also causing havoc in the opposition. There is serious infighting in the parties and in Zanu-PF, it is occasioned by the congress in December. MDC-T is also preparing for its congress next month, two years before it’s constitutionally due, and this speaks of serious problems,” said Masunungure.

“Tsvangirai is seeking a fresh and undisputed mandate after his leadership was challenged. They cannot fight Zanu-PF effectively at a time when they have serious internal problems. They cannot even offer alternative policies.”

Zimbabwe president suggests he was target of rally blast

Zimbabwe: The mystery of the missing MDC-T constitution