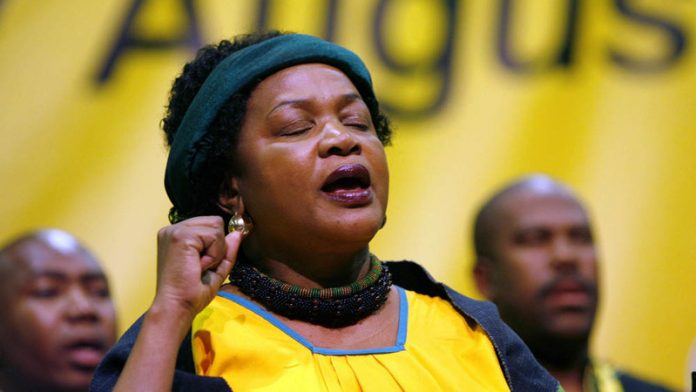 Maimane, who proposed the debate, was the first one to speak and his speech called on MPs to support the motion of no confidence in Mbete saying that with the chairperson of the ANC as speaker, “we cannot have an effective Parliament”.

Maimane said his motion was not personal but was about the office Mbete holds in the ANC and what it meant to hold the Office of the Speaker.

“She cannot serve as a leader of the ANC, and a neutral speaker in the House. The conflict of interest is untenable. Parliament can only work when the speaker puts country before party,” he said.

The motion tabled by five opposition parties calls for Mbete to be removed as the speaker claiming that she was incompetent, biased and that her position as ANC national chairperson created a conflict with her role as speaker.

Hundreds of ANC supporters started gathering in parliament hours before the debate. The supporters came by bus, trains and taxis and queued for hours on Tuesday to get space into the precinct and into the National Assembly chamber, but many of them could not get in and remained outside Parliament for the duration of the debate.

In an unprecedented move, Mbete addressed the gathered ANC supporters from a police van that was parked inside the Parliament. At the time of publishing, it wasn’t clear whether Mbete was addressing her supporters as the speaker or as in her position in the party. But it is unusual and could be inappropriate for any politician – let alone the speaker of a legislature – to use government resources to address her party’s supporters from within the legislature.

The DA accused Mbete of abusing state resources for what it calls an ANC rally. This was in reference to Mbete addressing party supporters. “This is a shameless display of partisanship by the Speaker, again reinforcing exactly why Baleka Mbete is not fit to be Speaker of the National Assembly,” said DA chief whip, John Steenhuisen in a statement.

Steenhuisen said Mbete has set a dangerous precedent and that in future, other parties would also want to hold rallies on the precinct. “Her use of a SAPS vehicle to address the rally is also completely unacceptable. It is an abuse of state resources, but is especially offensive given the ongoing debate about the SAPS deployment to the Parliamentary precinct,” said Steenhuisen.

Defending Mbete
Mbete has been criticised for a failure to separate her non-partisan position as speaker from that of chairperson of the ANC. The Mail & Guardian spoke to four of the ANC supporters – three of whom said they were from the nearby Khayelitsha township and one a party staff member. They all said they were in Parliament to defend Mbete mainly from the Economic Freedom Fighters (EFF). “We are going to crush this six percent,” said the ANC staff member who accompanied the visiting supporters.

She said Malema was disrespectful adding that the opposition parties were targeting Mbete  ANC MPs and parliamentary staff normally refers to EFF MPs as “six percent” in reference to that party winning 6% of the vote in the general elections in May this year.

In what is expected to be a heated debate, the ANC deployed Nomvula Mokonyane as first line of defence in the motion against Mbete. Sports Minister Fikile Mbalula, the Minister of Sciece and Technology Naledi Pandor and ANC women’s league’s Bertha Mabe complete the list of ANC speakers in the debate.

The DA deployed its parliamentary leader Mmusi Maimane, on whose name the multi-party motion was tabled. Chairperson of the DA caucus, Anchen Dreyer and the party’s chief whip John Steenhuisen complete the DA list. The EFF deployed former Umkhonto we Sizwe commander Khanyisile Litchfield-Tshabalala to debate on the behalf of the party.