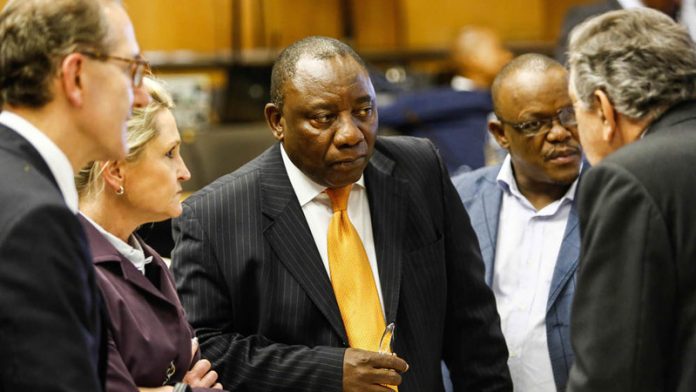 Evidence before the Marikana commission that Lonmin moved millions in platinum revenue from South Africa to tax-free Bermuda is likely to prove embarrassing for ANC deputy president Cyril Ramaphosa.

Ramaphosa, who was a Lonmin director and major shareholder until recently, came out swinging last month against corporate tax evaders, which he said have committed a crime against “ordinary” South Africans.

This week the Farlam commission of inquiry, which is investigating the events that led to the killing of 34 miners by police during the 2012 platinum strikes, heard that, for many years, Lonmin’s South African mines have paid “sales commissions”, recently averaging more than R200-million a year, to a company it owned in Bermuda.

Lonmin told the commission that it only put a stop to this practice in 2012, with a decision it says it backdated to 2008. The decision to stop was not made sooner, the company said, because it was blocked by its black economic empowerment partner Incwala – a company controlled by Ramaphosa’s Shanduka Group.

In a question-and-answer session in Parliament last month, Economic Freedom Fighters MP Leigh-Ann Mathys asked Ramaphosa what the government planned to do to crack down on corporate tax evasion.

He said that multinational corporations minimise their corporate tax bills “by shifting profits to low tax operations where there is little or no genuine activity”.

He added: “In most cases, these strategies are not illegal,” but said government enforcement agencies are making sure “that, as far as possible, attempts to move capital offshore for tax reasons are reduced”.

For several weeks, Lonmin has failed to explain, in response to amaBhungane questions, whether Western Metal Sales ever had an actual physical office staffed with employees who sold and marketed platinum on its behalf in order to earn the commissions.

When evidence leaders at the commission asked Lonmin to explain these payments on Tuesday, the responses were confusing and contradictory.

But among the facts that appeared to be agreed on by both Lonmin and the commission’s evidence leaders were the following:

What Lonmin appears to be saying is that, even though payments had been booked to Bermuda until 2012, the new agreements in effect redirected the fees to the British parent company from 2007 onwards.

In effect, Lonmin had “rewritten” its financial history, “making six years of financial statements incoherent without a comment”, said Dick Forslund, an economist who researched the Lonmin financials for the Farlam commission.

When evidence leader Matthew Chaskalson then pressed Seedat on why the decision was only made in 2012 and then backdated, Lonmin’s lawyer, Schalk Burger, interjected: “I have an instruction from the chief legal adviser to Lonmin to say the reason for the lateness of that agreement was that Incwala for very many years refused to agree to the new structure, and it was only by the middle of 2012 that that agreement could be obtained and that the agreement could be concluded.”

He resigned from Lonmin’s board in January 2013 when he re-entered the political sphere.

The reasons why Incwala allegedly prevented the Bermuda payments from being stopped was not discussed further at the commission. It is also not clear when this happened and what Ramaphosa’s role was.

Ramaphosa’s spokesperson, Ronnie Mamoepa, referred questions about the companies to Lonmin, but said he reiterated his statements that, “to the extent that there may be criminal transgressions with regard to taxation or money transfers, appropriate steps must be taken by relevant authorities, including the prosecuting authorities”.

‘Dormant’ company
AmaBhungane has sent three sets of questions about Western Metal Sales to Lonmin since August 12. In the only response, Lonmin spokesperson Sue Vey said: “This company [Western Metal Sales] has long been dormant and is no longer in use.”

Companies can legally avoid taxes by using aggressive tax planning and offshore structures, but this has become a nightmare for tax collectors across the globe as countries lose billions in potential revenue to offshore jurisdictions.

Of Lonmin’s Bermuda setup, Seedat told the commission: “A structure like this is normally set up to be optimal from a tax perspective.”

The fees paid from Lonmin’s South African subsidiary to its Bermuda subsidiary are an example of “transfer pricing” between companies owned by the same multinational (Lonmin’s parent company is registered in the United Kingdom).

But whether or not the “sales commissions” that Lonmin channelled to Bermuda would be acceptable in the eyes of the South African Revenue Service (Sars) is difficult to assess without more information.

For such a transaction to be acceptable under South African tax laws, it would have to be structured on an arm’s-length basis, as though each of the companies was trying to maximise its benefit from the deal.

Not an ‘exact science’
Lackay would not comment on the Lonmin example, but he said that assessing such transactions required in-depth information on the underlying commercial basis. And even then, judging whether or not transactions are at arm’s length is not an “exact science” and involved some “discretion”, he said.

In trying to ascertain whether or not Western Metal Sales is an operating company, amaBhungane tried to contact the firm.

Currently it is listed as being in the care of Appleby Services in Bermuda, an administration firm that services the offshore branches of many global corporations.

Cyril Ramaphosa was a shareholder and director in Lonmin, which has been accused of shifting profits to Bermuda for tax avoidance purposes.

When amaBhungane phoned Appleby, a staffer said Western Metal Sales is still active and is registered at Appleby’s Bermuda offices, contradicting Lonmin’s claim that the company was “long dormant”.

The Appleby staffer said that there are no Western Metal Sales employees based in Bermuda. She would not say whether it had previously employed staff, but did say the company had been in Appleby’s care for “a number of years”.

Financial risks
When he testified on Tuesday, Lonmin’s Seedat said that Western Metal Sales “took ownership” of the mined platinum once it left Lonmin’s refinery and began its route to the end customer. Thus, he said, the Bermuda company earned its keep by assuming various financial risks.

For example, once the product was on its way to the customer, it might go missing or the platinum price could drop significantly – these were risks that the Bermuda-based marketing agent carried. But he later contradicted himself by saying he did not think Western Metal Sales took ownership of the metal, in which case it is not clear how it would assume these risks.

Forslund said: “To decide if [the payments to Bermuda are] legal or not is for experts to decide. Whatever is the case, August 2012 [the month that miners were shot by police at Marikana] as well as the strike in 2014 showed this practice of moving large funds from a South African subsidiary is unaffordable in the deepest sense of the word.

“A large part of this money should have been used for wages, and social and labour [spending]. This is the main point that has come out from this research.”

The Alternative Information and Development Centre, where Forslund is employed, said it will ask Sars to investigate.

The preacher, the farmer and the bottle store owner

As expected, Ramaphosa appeared to be the wealthiest MP as he declared shareholdings amounting to about R76-million, as well as property investments that generate income against bonds and an unknown amount from the Tshivhase family trust.

The Tshivhase Trust holds a financial interest in the Shanduka Group, a diversified investment holding company. These financial interests are confidential, as the trust is held with people other than the ANC deputy president who are not public representatives.

ANC MP Lemias Mashile, who until May 7 co-chaired Parliament’s ethics committee that deals with MPs’ interests, has directorships and is an owner of two bottle stores – Lemmy’s Liquor Stores – and has shares in South African Breweries’s Zenzele Holdings. He is also a partner in two Lemias Spares stores.

The Democratic Alliance’s parliamentary leader, Mmusi Maimane, declared that he receives remuneration outside his parliamentary work but he did not disclose his salary from the Liberty Church, where he is a preacher. He is also a director of Maimane Training and Communication and owns three properties.

Malema holds no directorships, received no gifts, owns no property and has no sponsors, according to the register.

Basic Education Minister Angie Motshekga declared ownership of two houses in Midrand and Duiwelskloof and two huts in Modjadjiskloof, whereas her husband, former ANC chief whip Mathole Motshekga, declared that he owns no land or property.

Chairperson of the National Council of Provinces Thandi Modise declared her controversial farm in Potchefstroom and two houses, one in Edenvale and another in Mafikeng.

Although many MPs have received all sorts of gifts, from expensive whiskies to walking sticks and knitted scarves, Inkatha Freedom Party leader Mangosuthu Buthelezi said he had received no gifts during the period under review.