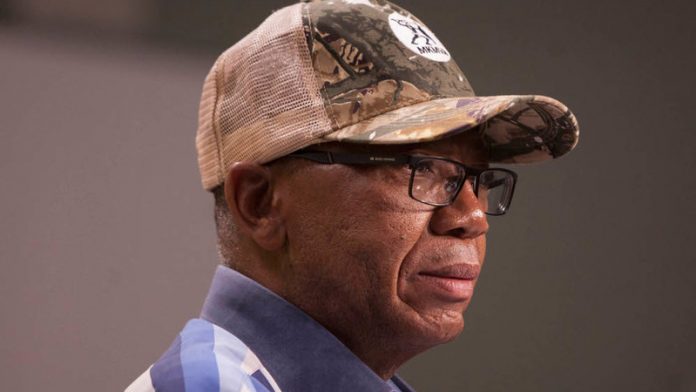 A challenge to Kebby

Now that Kebby Maphatsoe, the deputy defence minister and chairperson of the Umkhonto weSizwe Military Veterans’ Association, has been caught out falsely accusing the public protector of being a CIA agent (” Criticise Thuli, don’t insult her“), as well as his having admitted to lying about how he came to lose his arm as a deserter from an MK camp, I have a challenge for him.

In May this year, just prior to the national elections when I advocated opposing the ANC, he joined in the ruling party’s orchestrated attack on my character by alleging I “had hand-picked” the young woman who claimed Jacob Zuma had raped her. He announced he could produce the evidence to support his allegation.

I lost sight of Maphatsoe’s defamatory statement at the time in the cacophony of the ruling party’s verbal assault on me. I am prompted now to request this MK deserter either to produce the evidence he referred to, which can be tested in a court of law, or to retract his accusation. It is a cowardly and false allegation, which I categorically deny. – Ronnie Kasrils, former ANC minister of intelligence

Section 9 of the Public Protector Act (23 of 1994) states that no person at any stage shall insult the public protector – so, in terms of our law, it is actually a crime to do so. This has not deterred some individuals from attacking this office, as we have seen in recent weeks.

What is utterly dismaying is that Thuli Mandonsela has been personally slated by the same people who advocated for the establishment of her office at the dawn of democracy. Senior leaders of the governing party and its alliance partners have fiercely and publicly demeaned not only Madonsela’s intelligence but also her professional conduct.

ANC secretary general Gwede Mantashe took a swipe at the public protector, then Buti Manamela said “Thuli is not God” – and then there was Maphatsoe. His utterances and those of his colleagues are ridiculous and pathetic. They represent the kind of leadership figures who speak without thinking and then give the usual line about being misquoted. I fail to understand why people of such stature degenerate into sheer lunatics with no conscience.

In November last year, Mamphela Ramphele warned that Madonsela and her office were under siege from many quarters. She highlighted an important aspect of this issue: that we as citizens need to play a role in defending the space for Madonsela to work without fear or favour. I cannot concur with her enough.

The time has come for us South Africans to rise to the occasion and # ProtectThePublicProtector.

Not only does her office play an important role, derived from the Constitution, in investigating state affairs and taking remedial action to strengthen and support constitutional democracy in the republic, but also in protecting the public from state impropriety and prejudice.

This state institution should be protected so it can perform its function with excellence, professionalism and integrity.

We should condemn in the strongest possible terms any attempts to belittle or derail the work of the public protector. – Ofentse Mokae, 2014 Mandela Washington Fellow for Young African Leaders, Galeshewe, Kimberley

I am the co-chair of Black Activists Rising Against Cuts (Barac UK), an anti-racist, anti-austerity activist group and a member of the coalition of groups that form the Boycott the Human Zoo Campaign. I write on behalf of Barac UK, not the campaign itself.

I read your article, ” Brett Bailey’s Exhibit B knots up London knickers“, with some disappointment. In your opening sentence you describe the London-based boycott campaign as “baying for the banning” of Brett Bailey’s work. That is wholly inaccurate.

The clue is in the title of the campaign. I would have thought that any professional journalist would have been aware of that. Our views are available online, so there is no excuse for your complete failure to balance your article with comments from the campaign here in London.

Bailey chose, in the article, to basely attack our campaign by knowingly and wrongly claiming we are calling for his work to be “banned”. This is simply untrue and there is no evidence to support that smear. Bailey should be aware that calling for a boycott of institutions and business is a long and cherished tradition of the struggle against racism.

I am also surprised that a white South African artist supposedly committed to the cause of challenging racism should then describe serious black organisations, trade union groups, campaigning groups representing over a million people, in addition to the more than 20 000 people who signed our petition, as engaged in “mob hysteria”. It would seem that Bailey’s latent arrogance and white privilege let him assume he can make such baseless claims without consequence.

Here in London, a city that is 40% non-white, we have a strong and powerful tradition of black self-organisation and radical antiracism. Bailey or the Barbican, where Exhibit B was shown, could have at any time spoken to a wide range of organisations before putting on the show, in an effort to seek their views on what is, by his own admission, deeply contested territory.

They choose not to do so and, to add insult to injury, Bailey and your paper falsely and grievously malign the campaign, using exactly the same tactics as the apartheid regime employed to suppress and marginalise radical African artists opposing apartheid.

It’s clear to us that Bailey’s arrogance and white privilege renders his artwork redundant in terms of our struggle for race equality in the UK. His comments to you reveal his mendacious and disingenuous approach to this issue. This simply reinforces our view that Bailey’s work not only fails to challenge racism but in reality also reinforces racist views.

According to performers in the exhibition, they have been laughed at by groups of visiting white people and subjected to both racist and sexist remarks. This reinforces our position. That African performers in this exhibition, having issued a pre-prepared statement, then are outrageously banned from talking to both ourselves and the press rather ironically demonstrates the real reality of white power, control and oppression of even those Africans in this show. – Lee Jasper, London