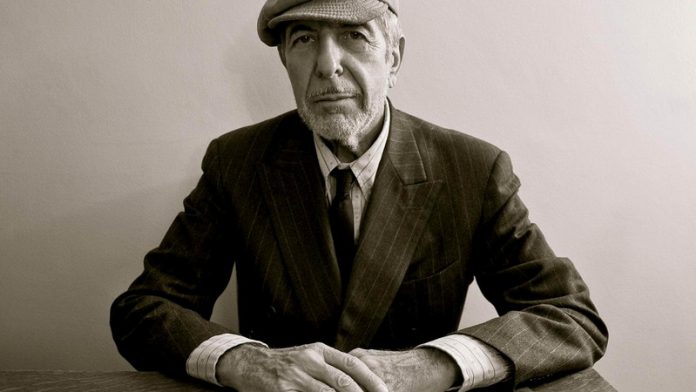 You can actually hear Leonard Cohen’s mouth when he sings those intimate songs on Popular Problems.

Producer and co-writer of the album Patrick Leonard says there were no tricks used in the recording. “It’s the way Leonard sounds. It’s all just the way he sounds,” French-Canadian Leonard, who is best known for his collaborations with Madonna during the peak of her career in the 1980s and 1990s, tells me after the listening session.

“It sounds like he’s standing right here in front of you.” The secret is in the equipment used. “That’s what happens when you put a good microphone on somebody … it’s the same mic I made every record on. That mic has been with me since the 1980s and it’s the same mic we’d done [Madonna’s] Like a Prayer on. It belonged to Frank Sinatra – it’s a [Neumann U] 47 microphone – it’s a German-made mic. You put it through a nice Neve 1073 mic pre-amp and that’s it!

“You put the mic this far away” – he shows about a metre with his hands – “he sits down and that’s it. “You listen to this record and it is not tight and it is not precise and not any of the things people are really striving for – but in that, it feels fresh. It somehow feels like it is alive, because it is not careful.”

Popular Problems was the Leonards’ second album together. “We finished in July – haven’t listened to it since then. I listened to it now, and I hear what’s going on, and I hear where we didn’t quite get it, where it’s good and where it isn’t … and I hear my own shtick and I hear his shtick. It was fun making the record. Leonard is always fun, he’s great. He’s really funny. He is generous. I learn a lot – with every experience with Leonard I feel like I’m the beneficiary, I learnt something.”

There’s at least 100 years of studio experience between the two men. “You’re hearing that, you’re hearing two old guys at work. I’m 58 and I started recording when I was 12. What I hear when I listen to it [is] there’s nothing to prove.”

The two Leonards are already busy with their third collaboration. “We’re starting on new stuff and more stuff … we’re going to go into this again and we’re going to do it again.”

“Slow is in my blood”: Leonard Cohen talks about his songwriting process

Beefs are not just hip-hop marketing tools. For the uninitiated the Urban Dictionary says “beefs” are used “when rappers aren’t good enough lyricists to have fans or just want some publicity, they will copy Tupac and Biggy and set up a beef with another rapper”.

But beefs, or rivalries – real, imagined or created – go back a long way. Back in the 19th century there was the so-called “War of the Romantics” between composers Johannes Brahms and Richard Wagner. Also in classical music, there was the serial beef between Igor Stravinsky and Arnold Schoenberg in the following century.  More recently, in reggae there has been I-Roy vs Prince Jazzbo, Ninja Man vs Shabba Ranks and Beenie Man vs Bounty Killer. In rock, like in most genres, these beefs are often created by marketing departments, the media or by the artists’ fans.

Who can forget the Beatles vs the Stones rivalry? And of course, were or are you in the Bob Dylan or the Leonard Cohen camp? The latter, like so many times before, will probably come up again with the release next week of Cohen’s  Popular Problems, and will intensify if the promised Dylan album materialises in November. Back in 2008, Luke Turner wrote in The Quietus: “For me, Dylan has always paled into insignificance compared to his contemporary Leonard Cohen.  A poet before he became a reluctant musician, Cohen possessed an uncomfortable and humble voice that found itself over simple acoustic guitar. This simplicity is what liberated his brilliant words.”

Nobody asked Cohen at Tuesday night’s Popular Problems private listening session in London about this supposed rivalry because they knew the truly humble man would have declined to answer, and he and Dylan are good friends. Turner tells in his article about the famous conversation piece when Cohen and Dylan discuss how long it takes them to write their lyrics; Cohen says it takes him a month, Dylan, “about 10 minutes”. Dylan was probably exaggerating and Cohen was actually understating. At Tuesday’s session Cohen alluded again to how he labours over his lyrics: “I don’t know how other writers work, but I just have a sense of gratitude that you can bring anything to conclusion … it’s the doneness of a thing that I really cherish.”

Asked whether he knew when a work was done he said: “Yes, yes … I think it was [WH] Auden who said a poem is never finished, it is just abandoned.” He did not call the opening track of the new album Slow for nothing: “It’s not because I’m old/ It’s not what dying does/ I always liked it slow/ Slow is in my blood.” In fact, one of the other tracks, Born in Chains, has “been kicking around for 40 years”, Cohen told journalists in the United States last week. “I’ll have another shot or two at it when I go on the road – if I go on the road,” he was quoted as saying by  Rolling Stone.

“The road is beckoning. I know if I run that song down in concert two or three hundred times, I’m going to get it.” Two years ago he explained his songwriting process to the  Guardian: “I think ideas are what you want to get rid of. I don’t really like songs with ideas. They tend to become slogans. They tend to be on the right side of things: ecology or vegetarianism or antiwar. “All these are wonderful ideas but I like to work on a song until those slogans, as wonderful as they are and as wholesome as the ideas they promote are, dissolve into deeper convictions of the heart. I never set out to write a didactic song. It’s just my experience. All I’ve got to put in a song is my own experience.”

After the London session I asked British singer-songwriter Jarvis Crocker, who also came to listen, why he loved Popular Problems: “I like records where you feel someone is telling you something personally. The best records are a conversation and you are involved in that.”