When we judge the judges, where do we draw the line? 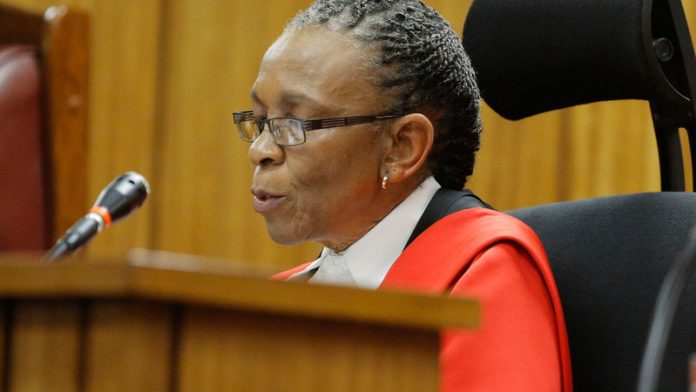 On February 25 2014, Judge President Dustan Mlambo ruled that the entire Oscar Pistorius trial could be broadcast live via audio and television. This was an unprecedented decision that for the first time gave millions of viewers in South Africa and around the world a glimpse of how the country’s criminal justice system works.

For 43 days, people were gripped by the trial that unfolded, with some consequences that could have never been foreseen.

When Judge Thokozile Masipa was announced as the presiding officer, the media and others rushed to inform us of how experienced she was, referring to her history as a reporter and about how firm she was with those accused of violence against women. We were told that she was a great choice.

On September 11 and 12, Masipa found Pistorius not guilty of premeditated murder, as the state maintained throughout the trial, but guilty of a lesser charge of culpable homicide.

The pendulum then swung dramatically against her. The highly esteemed judge, who is the second most senior African woman to be appointed to the Bench, was suddenly seen as incompetent and incapable of making a correct decision. The jurisprudential mind who before the trial was credited for her professionalism, hard work and fairness is now the judge who doesn’t know what she is doing.

The backlash following Masipa’s decision has not only exposed people’s disappointment in the criminal justice system but also reignited the perception that rich people – in this case, a white man – can get away with anything.

The sexist and racial attacks made on Masipa have revealed that, as much as we may not want to believe it, all is not well in our rainbow nation. It takes just one unpopular decision for a professional, well-respected and seasoned judge to be reduced to a stereotype of race and gender. Being an impartial presiding officer is no easy task and hence no one should underestimate the amount of effort, time, studying and reasoning that Masipa had to undergo.

What is acceptable and what is not
Furthermore, if Masipa was wrong on matters of the law, the Supreme Court of Appeal will, if called on by the state to do so, deal with it.

But what is still ongoing is the fact that Masipa now has to have security protection because of threats on her life.

There has been a deep disrespect and disregard for the office she holds. Many experts and others have weighed in on what the verdict should have been, with varying degrees of contempt.

None of these experts has ever had to preside over a trial, weighing up both sides of the arguments and deciding the outcome based on law and not on emotion.

Are people entitled to air their views on the judgment? Most definitely. But does that mean that Masipa should become a target for those wishing to vent their frustration about how the system works because the result of the trial was not what they wanted? Absolutely not.

There was no popular education before and during the trial by the department of justice and the National Prosecuting Authority (NPA). Once the decision to televise the case was made, both institutions should have at least instituted an education slot on radio and television, teaching people about the basic elements of a criminal trial. For starters, about how bail is granted and why it is not revoked after a conviction, about the fact that a judge has to be convinced of guilt beyond reasonable doubt, and about what each charge filed by the NPA meant and how it could be proved.

Judges rule on what is put before them
Although there is no guarantee that everybody would have understood the basic elements of a criminal trial, at least there would have been a better understanding of how the system works.

Sadly, the lack of popular education meant that people watched the trial as they would a soapie, with a romanticised ending envisioned. When it did not happen, the first person to get the blame for it was the judge.

Judges are human beings placed in a unique position, which requires that they decide a case on what is put before them. Like umpires, they are there to officiate, only intervening when necessary, before applying the relevant principles of law to the matter before them, regardless of what the public demands.

They must be independent and apply the law without fear or favour. They cannot decide a case on what should have been put before them or what could been put before them and was left unsaid. They perform an extraordinary job each day of their lives, the depths of which I cannot claim to understand.

What I do know is that our judges are selected in an open interview process, a far cry from the pre-1994 era. Previously, the process of appointing judges was shrouded in secrecy. Appointments were effectively made by the minister of justice, with the president merely acting as a rubber stamp.

In this democratic era, candidates are interviewed publicly by the Judicial Service Commission. At the advent of democracy, of the 165 judges, only three were African men and only two were women.

Twenty years down the line, our judiciary boasts a complement of 243 judges, 64% of whom are people of colour and 32% of the total number being women. Our courts are transforming and our judges reflect more of our social make-up than 20 years ago, but attitudes are still a long way from changing.

Constitution applies to judicial officers too
The response to the Pistorius verdict has reminded us that we have a long way to go. The ever-present stereotypes regarding gender and race that continue to lurk in the background have resurfaced.

Masipa’s enormous efforts on the Bench for the past 16 years have been ignored because there is a collective sense of rage about the way our judicial criminal system functions.

Our courts not only help shape the law but they interpret the intention of the legislators with a view to advancing the transformative nature of our Constitution and protecting the rights of all people, including those accused of heinous crimes.

Our Constitution cherishes human dignity and the achievement of equality, gender equality and nonracialism, among other founding values.

These founding values are not limited just to how we treat those passing through the courts but are also extended to those who preside over our courts. We would do well to remember that sexist and racist attacks on a person say more about those who are advancing them than they do about the person who is being targeted. Even if she is a judge.

Tabeth Masengu is a researcher at the Democratic Governance and Rights Unit at the University of Cape Town.