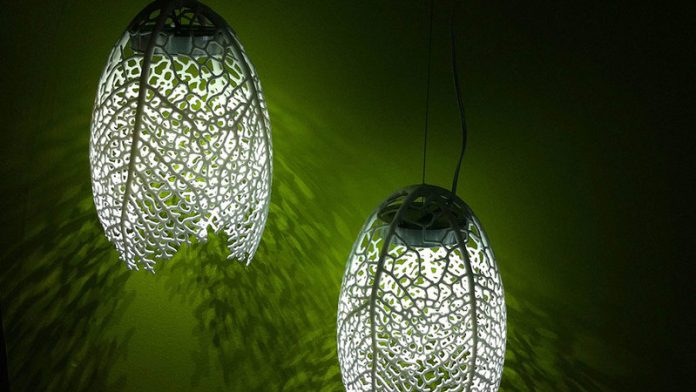 It begins as a dusting of metal or plastic, melted together to form a single layer. Once the first layer has been melted, more granules are sprinkled on top and are welded to each other and the layer below.

These layers are incredibly thin and allow a degree of precision and detail impossible with previous technology. With each additional layer, an object begins to appear.

This is the allure of additive manufacturing or 3D printing: any object, from a piece of jewellery to the fuselage of an aircraft, can be custom made without wasting any materials.

With this technology you can create any physical model – no matter how intricate, and even one with moving parts – from a software file sent to a printer from anywhere in the world. It is being used to manufacture high-tech specialised parts for the aviation industry and custom-made biomedical prostheses such as hip joints.

According to consulting company Wohlers’s 2014 state of the industry report, the market for 3D printing and additive manufacturing is now worth about $3-billion, with annual growth of 35%.

“We need to accelerate our efforts to get [additive manufacturing] into industry and manufacturing,” says Gerryts.

That is why the science and technology department, in conjunction with the Council for Scientific and Industrial Research (CSIR), academia and industry, is developing an additive manufacturing technology road map to plot the course for South African companies and manufacturers in this “new revolution”.

Although there are initiatives to drive large-scale manufacturing, it also opens doors for entrepreneurs and small-business owners who do not have the capital for large quantities of stock or retail space.

Design, art and jewellery company Nervous System is one such success story. “Customers create their own designs with our web-based design tools,” says the co-founder, Jessica Rosenkrantz. “Next we transmit the file to our 3D printing partner for fabrication [and] after about two weeks, we will receive the 3D-printed part in our studio.”

Their business, which is based in the United States, is mainly online, although Rosenkrantz says that they do have a small gallery in their work studio.

“We definitely save on operating costs by not having a public store front. Because we have low or no inventory, we are also able to experiment and make improvements to our products.”

Asked why she chose 3D printing as her technology of choice, Rosenkrantz says: “Truly, software is our medium. We create design systems based on how patterns form in nature and use those to ‘grow’ our products … Their forms are complex and would be very difficult to make using traditional manufacturing methods.”

Dave Bullock, one of the founders of the KwaZulu-Natal-based 3D printing company Rapid3d, says that there has been an “explosion of consumer-type products accessible to hobbyists and enthusiasts”. These start at about R10?000 and are usually for 3D printing with plastic. “The machines are spread over a wide range of applications, and are diverse in terms of cost,” says Bullock.

The more commercial printers, which usually process metals, can range into the millions.

“There is such a wide field of application, we could talk for hours on any one of them.”

But first, you need the know-how. Rosenkrantz and her co-founders have backgrounds in computer science, rather than 3D printing. says Bullock: “The single biggest requirement is to have access or already be using 3D content generation … For 3D printing, you have to have 3D data.”

However, the advent of smartphones and 3D-imaging applications means that almost anyone with a cellphone has access to 3D-visualisation software.

Gerryts says that educating people about what can be done with 3D printing, and courses in this technology, will form part of the road map, although he was unable to say when it will be finalised.

The Rapid Product Development Association of South Africa, which co-ordinates activities and knowledge sharing in the sector, estimates that there are more than 1?400 3D printers in the country, of which about 300 are in the high end of the market, in science councils and higher education institutions.

“SMEs [small and medium-sized enterprises] can go there and get an item prototyped and a one-off made,” says Gerryts. “They can have access to the technology, and get the look and feel of their prototyped product. It’s a low-risk environment [in which they can] make decisions.”

The major South African investment in 3D printing has been in the additive manufacturing of titanium.

The Titanium Centre of Competence, with a price tag of about R200-million, is an umbrella organisation that co-ordinates the country’s technological development, with the aim of developing and commercialising South Africa’s titanium industry.

Its research ranges from primary metal production to high-speed additive manufacturing, such as titanium hip joints. The R40-million Project Aeroswift, a collaboration between the National Laser Centre at the Council for Scientific and Industrial Research (CSIR) and the South African aerospace manufacturer Aerosud, aims to develop additive manufacturing techniques and the world’s largest 3D printer.

Aerosud is an established supplier to major aircraft manufacturers Airbus and Boeing, producing almost a million parts a year. “South Africa is the second-largest supplier of [titanium] mineral ore, but adds little value to that before export,” Derek Hanekom, then the deputy minister of science and technology, said at the launch of the project in 2012.

“The CSIR has developed a novel process whereby titanium metal powder can be produced from our abundant mineral resource.” Using a R10-million specialised laser, bought by the CSIR, “this system will be the first of its kind in the world as it will be able to build [larger] parts,” Professor Federico Sciammarella, the competency area manager at the centre, said at the launch.

Already the platform is 8.3 times faster than traditional systems, but could operate faster still, he said. Beeuwen Gerryts, the director of advanced manufacturing technologies in the department of science and technology, said this week that the pilot plant is operational, and that spending has been allocated for phase two, which will be “process evaluation and optimisation”.

From a new hand to a house, you can 3D-print almost anything

After losing four fingers in a woodworking accident in 2001, South African Richard van As used 3D printing to build himself a new hand, called “Robohand”. The technology has since been used to rebuild a hand for a five-year-old boy who lost his fingers because of amniotic band syndrome – they were caught in part of the amniotic band in his mother’s uterus.

This week, 3D printing literally went out of this world. A SpaceX Dragon capsule touched down at the International Space Station, carrying with it a 3D printer.

Constructing a space station is a bit like building a toy aeroplane, but all of the parts are in a box in the opposite side of the room and you can only take out one piece at a time. Except in this instance, the “other side of the room” is about 250km above the surface of the Earth.

“3D printing serves as a fast and inexpensive way to manufacture parts on site and on demand, reducing the need for costly spares on the International Space Station and future spacecraft,” the United States’ National Aeronautics and Space Administration said.

Size is no object for 3D printing – or speed, it would seem. First, a Dutch company 3D-printed a house, and then a Chinese company – not to be outdone – printed 10 houses in less than 24 hours. And the good news is that you can now even 3D-print your own house.

Enter WikiHouse, a not-for-profit, which, according to its ­website, is an “open-source construction set. The aim is to allow anyone to design, download and ‘print’ …houses and components, which can be ­assembled with minimal formal skill or training”. The cost would depend on what kind of house you want, and the materials you want to build it with.

3D-printed prosthetic limbs: the next revolution in medicine