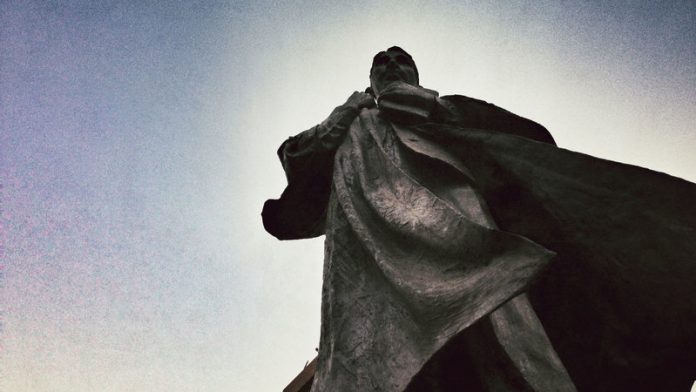 I don’t remember much about my grade four history teacher Mr Govender – or standard two as we called it back then. I had a vague impression that he was a towering, stern man with a handlebar moustache.

One day he summoned me over to his desk. I was a skinny slip of a girl with dusty knees, belted into a grey skirt that was always slightly too big for me. Thankfully Mr Govender was seated so I could look him more or less in the eye, when he asked when India had gained its independence.

Independence from what? “You know, the partition?” he prompted. I pictured a great tearing in two of a country’s land mass. Goodness, did that actually happen to India once and my 10-year-old self was entirely ignorant of it?

I was too busy following the independence in my own country: the army tanks that had patrolled our streets earlier that year as my parents had gone off to do this tremendously exciting thing called voting. I even got hold of a copy of the interim constitution and kept it in my bedside bookshelf, trying to make sense of the seemingly magical document.

Eventually Mr Govender gave up on me with a frown of disappointment. “1947. India received its independence from Britain in 1947. There was a partition and Pakistan was created.”

It took me a few years to work out that Pakistan was still actually attached to India and had not, in fact, been set free to drift off into the ocean.

Given that it was 1994 the apartheid government’s separate schooling was still going strong. My teachers, classmates and neighbourhood were all predominantly Indian, thanks to the Group Areas Act. India’s liberation struggle wasn’t necessarily on the school curriculum, but we held a cultural evening soon after my conversation with Mr Govender and we were tasked with going off to learn about the “great soul”: Mohandas Karamchand Gandhi.

I was officially inspired. His philosophy of satyagraha, life journey and political leadership were fascinating and I started reading Indian novels to understand this place where he came from.

But always closer to home was South Africa’s struggles: this new born democratic infant struggling through its first few years of relief, hope and, with time, disillusionment as the inevitable first corruption cases were uncovered.

A sense of African nationalism and pride was growing stronger and stronger and Gandhi’s legacy in our country became a complicated one. South African Indians love to say to those from India: “You gave us a lawyer, and we gave you a mahatma,” referencing the ancient Sanskrit honorific that became part of his name.

Gandhi’s spiritual renewal and key ideological changes came under pressure in South Africa, as he faced the brutal apartheid regime in his 21 years of living all over the country.

But Gandhi championed the cause of Indian people, not the African majority.

I remember singer and activist Simphiwe Dana bitterly bringing attention to the fact on Twitter one day. Dana, a leading voice of “black twitter” – a great sample of the country’s rising young, smart intelligentsia – had said what everyone was thinking. When I had interviewed Gandhi’s granddaughter around the same time, the gracious and lovely Ela who served as a parliamentarian under Nelson Mandela, she was at pains to focus on the plight of the majority of the South Africans and avoid narrow Indian concerns.

It had been a while since I had last identified with Gandhi myself: my working life as a journalist had been spent, every June, covering all things Nelson Mandela-related and the collective adoration of my countrymen spurred me on further in that direction. There was not much room in my heart for the Mahatma.

By 2010 however there was a big movement across South Africa and India as we celebrated the 150th anniversary of the arrival of the first Indians in South Africa. The first ship had come in 1860, bearing indentured labourers to work the sugar cane fields, as slavery was now abolished. My own ancestors, five or so generations ago, came over in 1865 according to documentation I found during that year of thinking about the connection between the two countries and my own place within the narrative.

People from India started coming to South Africa to pay homage to Gandhi in increasing numbers since our democracy. They were puzzled at the lack of ceremony around the various monuments to the great man, scattered around the country. “There was litter all round his statue in the train station,” one visiting tourist from India said to me, sadly.

2010 came and went and I was given a reprieve from endless functions celebrating the anniversary and the idea of being Indian-descended in South Africa was increasingly a non-issue.

Identity was so complex, I found as I grew through my 20s. I identified as a Christian, a feminist, a cyclist and half a dozen other passions besides. The place my forefathers came from was bound to influence me, as was the land that had been ours for over five generations. It was no biggie. I stopped thinking about Gandhi.

But earlier this year a friend of mine held a group exhibition, and asked me to show some of my mobile photography – a small hobby of mine. The theme of the exhibition was great men in our country’s history: Steve Biko, Oliver Tambo, Nelson Mandela of course and … Gandhi.

I whizzed through the first three: For Steve Biko, I managed to get hold of one of the iconic T-shirts bearing his image and strung it on one of the ubiquitous rooftop laundry lines in the crowded inner city, capturing his face blowing in the wind as the sun set over the deepest parts of city of gold, where my husband and I live, and its thousands of apartment blocks and hundreds of thousands of lives and quiet dramas.

Tambo was harder. I hardly wanted to photograph Johannesburg’s airport. I settled with a wide shot of Chancellor House, the law firm he once ran with Mandela. And I was spoiled for choice with Madiba.

But I just couldn’t get Gandhi right. A visit to Satyagraha House in Orchards, where he spent about a year, gave me a stark black and white shot of an artwork carrying his name signed in 11 different languages, in his own hand. I had never been to the house and was touched that a French organisation kept it running, and that it doubled as a B&B suffused with soft light and an uncanny sense of peace.

But the image was emotionally vacuous. My friend sent it back to me with a friendly tip to try again. This time my husband loaded a stepladder in the boot of our tiny car and ferried me over to Gandhi Square. A central transport node of the inner city, it was after work hour and busses came and went as the sun did its setting trick, which made for the best photography.

I couldn’t quite spot where his office had been in that large square, which he also apparently lived in at one point. But his statue, upon a small plinth, stood proudly to one side. It had survived the sway of public opinion, the changes his reputation would undergo through each version of history, and the defecating enthusiasm of pigeons flying overhead. He was still here. His legacy and his actions on behalf of a billion people in India and decolonisation movements elsewhere would survive. It couldn’t do otherwise.

I climbed the stepladder unsteadily to get the shot, and felt vulnerable, teetering on the heights of greatness and not a little aware of the ladder’s ageing components. Also, the angle was terrible.

It was time to climb down I decided, and face the Mahatma as one ought to: looking up at him. I got my shot.