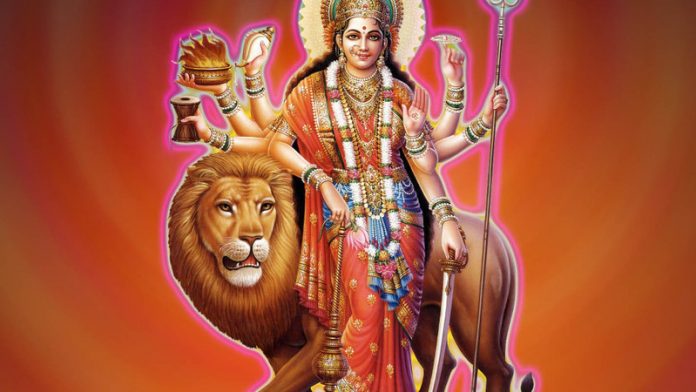 The Hindu festival of Navarathri, also known as Durga Puja, is celebrated in both South Africa and India. As it comes to an end this week, it seems appropriate to reflect on the story of the goddess Durga, one of the oldest and most important manifestations of female divinity. Navarathri literally means “nine nights”, an annual celebration honouring the Divine Mother – the deity envisaged in female form.

Her story in the Devi Mahatmya (from about AD800) centres on the archetypal theme of conflict between the sexes, the disruption caused by men seeking to dominate and manipulate women.

This dramatic myth focuses on the world-shaking, centuries-long battle between the gods and the demons, between good and evil, familiar to all religions. Finally, in the story, the greatest threat appears: the fearsome buffalo demon Mahisasura.

In his furious attempt to gain total control, he drags off the goddesses, ordering them to go and do their housework. The impotent male deities, despairing of victory, combine their energies to create a new female deity who possesses all their power.

This is Durga, the supremely radiant one, more powerful than all the gods and demons together. They hand her their weapons, assuring her that only a woman could rid the worlds of Mahisasura.

Durga boldly proclaims: “Those who violate dharma will go the way of moths.”

Then she retires to a hermitage to prepare herself with meditation and fasting. The demon ranges through the forest until he discovers her and, seeing how lovely she is, addresses her arrogantly: “I am the heroic buffalo, king of the demons. I hold this entire universe in my arms. Young girl, choose me as your husband.”

She smiles and answers: “I have practised abstinence and self-control for a long time to prepare myself; if you are mighty, show me your might.”

The demon bellows, tossing mountains around to demonstrate his strength, but Durga takes her weapons and armour and mounts her lion chariot. Her terrifying energy fills the skies. The demon assembles his armies and “a hundred thousand times ten million horses”. He pounds the ground: the earth shakes, the oceans overflow, and the clouds break into fragments.

But, assisted by other goddesses she has created, Durga slays all the monsters. Then, without any sign of strain, she cuts off the demon’s head. He falls to the ground, dead. All creatures in the world shout “Victory!” and praise the goddess.

The story reminds readers that it is men (symbolised by the demon) who are most often violent and destructive, disrupting the social order, and it is a female figure who is required to challenge this chaos and restore order and stability.

Men are so caught up in the cycle of violence, war and revenge, that only a woman is capable of breaking this repetitive disorder, restoring dharma and peace.

The victimisation and abuse of women in the home and wider society is highlighted in many myths of the Hindu mother goddesses. These age-old stories (such as that of Draupadi, goddess of fire-walking) retain their ancient potency, offering an explanation for much of the suffering endured specifically by women.

Many stories relate how female deities suffer, but their anger at injustice and their ultimate victory over disorder should encourage women today to continue to battle against the violence wrought by male power that is out of control.

Shakti, the primordial creative and healing female energy, allows women to triumph over the circumstances of their lives. Durga, often described as “virgin”, is not dominated by male control; she is autonomous, repulsing unwanted attempts at seduction, responding to whom she will through choice, not compulsion.

Mahisasura’s attempts to belittle and dominate Durga, mockingly calling her “young girl”, and his commands to the goddesses to return to their housework, exemplify patriarchal control that demands women’s subservience.

Durga is traditionally depicted with calm beauty: however hard the fight, she is unruffled and undiminished, demonstrating that women can combine beauty, strength, integrity and virtue. Her self-control empowers her with the virtue to vanquish the demon. Another of her names is Sati, meaning faithful and pure – refuting another patriarchal fabrication that women, by nature, are fickle, weak and impure. Durga, invincible warrior for peace, a role model challenging women to confront sexual injustice and conflict in male-dominated societies, creating a safer, more peaceful world.

Alleyn Diesel has a PhD in religious studies from the University of Natal, specialising in Hinduism in KwaZulu-Natal.