Joshua Wong: The face of the Hong Kong protests for democracy in 5 pictures 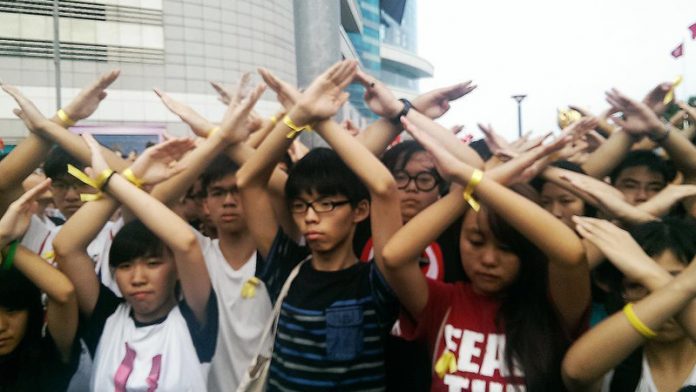 Hong Kong’s streets are lined with thousands of people who are protesting an election reform that mandates Beijing’s approval of candidates for Hong Kong’s chief executive – at the centre of it all, 17-year-old student activist Joshua Wong, the leader of a student group called Scholarism.

The protests started after the Beijing government turned down demands for a free and fair election for Hong Kong’s next chief executive in 2017, effectively tightening the noose on the throat of those in the opposition party who favour more democracy.

Instead of favouring an open election, China’s National People’s Congress said that nominees for the executive needed to be approved by a committee made up of more than 50% of pro-Beijingers.

Furious protesters are having none of it, nor is the skinny, bespectacled Wong, who despite several efforts by the government to censor media and social media coverage, has found himself gaining a lot of global traction and harnessing a lot of support as the face of Occupy Central.

In the digital age, where the protest is no longer an isolated event, Wong’s youthful rage can be heard all over the internet. His protest-march-feet were wet two years ago when he lead demonstrations against a governmental plan to implement “patriotic education” – something he called Chinese Communist Party indoctrination. And in this past week, he has been no less vocal and vigorous about the current demonstrations, charging government buildings with throes of followers and inspiring many more to take to the streets in protest.

Let’s take a look at Joshua Wong in five pictures.

2. Some say his views appeal to a new generation of Chinese born citizens, hungry for a more democratic society.

3. Wong is arrested by police during a demonstration outside Hong Kong’s government headquarters.

5. According to stats from the Straits Times Asia Report, Wong’s two-year-old student movement Scholarism already ranks at number eight on the top 10 of Hong Kong’s political groups, and social media savvy students have contributed a lot to drive the political and social force forward.