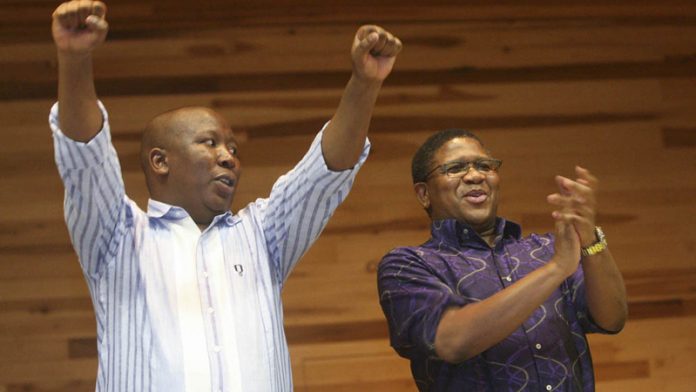 These days Twitter spats involving politicians are a yawn a minute. Oh, Helen Zille had another meltdown? Next social media round-up, please.

But when two former allies tore into each other for the first time publicly, we all sat up and paid attention.

To be fair, we’ve waited a long time for the tension to finally snap between Economic Freedom Fighters (EFF) leader Julius Malema and the sports and recreation minister, Fikile Mbalula.

Malema staked his political career in the ANC on Mbalula making it into the top six as secretary general at the party’s Mangaung conference in December 2012, but he was booted out of the ANC beforehand. Mbalula decided against throwing in his lot with the untested EFF and has been trying to consolidate his position in the ruling party ever since.

Was his seemingly unwarranted attack on Tuesday on the increasingly popular Malema a case of overcompensating?

Louis Vuitton
Mbalula took on Malema on Twitter for wearing a Louis Vuitton belt to his court appearance related to charges including racketeering and fraud. He and his co-accused are alleged to have defrauded the Limpopo transport department of millions.

In Mbalula’s trademark chaotic syntax he tweeted a picture of the belt, followed with: “Consistency must be portrayed by leaders, dont have double personalities ‘poor’ yet you’re drowning in Branded clothes like Malema.”

It is a commonly expressed criticism of Malema, though perhaps not the best articulated attempt. But it was enough to start a free-for-all as Malema’s party members and defenders, who are particularly vocal on Twitter, piled into a spectacular barney with “Minister Razzmatazz”, as Mbalula is known.

Except that that wasn’t the name he was content with this time.

“And hey Karate Kid, don’t forget I’m a Mr Miyagi [a reference to the martial arts master in The Karate Kid film] to you @Julius_S_Malema. Phola,” he shot back at Malema, his once-upon-a-time protégé.

Razzmatazz
But razzmatazz – as in entertainment – defined the spat. The ­difference between this and other Twitter arguments between public figures was that this time it became a true spectator sport.

“Google me,” Mbalula quipped to one EFF supporter demanding to know who he thought he was anyway.

He and Malema’s supporters traded insults and insinuations about tender corruption, ­alcoholism and lack of support from the electorate, many with meme-worthy images attached, as the warring seemed edged with a bizarre sense of glee. “Bye Mr Minister Miyagi,” tweeted Malema at the end of the fight.

An eruption between the two has been a long time coming.

Malema told the Mail & Guardian as early as February this year that his friendship with his former “bestie” and predecessor as youth league president had essentially died. Interestingly enough though, Malema was largely gracious about “Mbaks”, as he still fondly referred to him, needing to maintain his distance.

‘Uncomfortable’ meeting
“I saw Mbalula for the first time since I formed the EFF [last October] with comrades when I bumped into him in Cape Town in January. And you could see the man was uncomfortable – he was not himself, not welcoming,” Malema told the M&G at the time.

Choosing his words carefully, Malema said: “It was such interactions that have made me more ­convinced that I should not impose myself on these guys … If they were to be seen with me they would be victimised.

“As a person you need to avoid crowding people’s space if people feel uncomfortable with your presence.”

If nothing else, it’s refreshing to hear our leaders relate honestly to each other, instead of the tired “I’m a humble servant of the movement” line we get from older ANC types.

Mbalula tweeted his disdain that the spat proliferated like wild fire through local news outlets – we’re sorry, Mr Miyagi, but this one was too good to let go.

The president was answering questions before parliament, where he also told the EFF to allow the courts to decide on the matter of the CR17 bank statements
Read more
Opinion

The national coronavirus command council will meet next week to discuss ways it can clamp down on the increasing Covid-19 infections. This is after the cabinet met this week to express its concerns
Read more
Politics

MPs can’t seem to stop the house from degenerating into screaming matches, even during virtual sittings, as exhibited when the deputy president answered questions in the NCOP on Wednesday.
Read more
Business

In an increasingly digital world, OnlyFans has given online creators a new way to make money on their own terms
Read more
Advertising