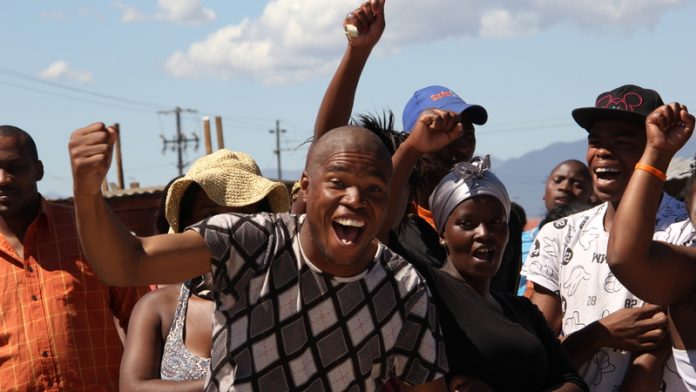 In a rare, last-minute abortion of a City of Cape Town Anti-Land Invasion Unit (ALIU) operation, the city deemed shacks that were apparently “put up during the night” to have been “occupied”. According to activists who have mobilised against evictions in the area in recent months, this leniency is unprecedented.

On Monday, the ALIU demolished 135 shacks that the city claimed to be “incomplete and vacant” structures in the Mangaung informal settlement in Cape Town. In response to objections from the settlement’s most recent residents, who say they moved there about two weeks ago, Human Settlements MEC Bonginkosi Madikizela said that the residents had built the shacks less than 24 hours before the evictions, and that therefore the provincial government, which owns the land, did not need a court order.

On Tuesday, on the advice of activists who had mobilised against evictions in the nearby Marikana informal settlement, some of the people who lost their homes lodged complaints at the Philippi East police station.

Shackdwelling communities in the area are becoming more aware of legal and constitutional rights that protect them against eviction, says community activist Tumi Ramahlele.

Demolition abandoned
Minutes before ALIU removal trucks and police armoured vehicles arrived in Mangaung for a second round of evictions on Tuesday, Ramahlele was on the scene to warn the community. Ramahlele, who has been central in bringing a High Court challenge against the city’s evictions in nearby Marikana in January, advised residents to demand a court eviction order from the ALIU if the unit tried to break down any structures.

Residents faced off with the ALIU’s officers and asked them to present a court eviction order, which they did not do.

After a tense period during which ALIU officials inspected a number of structures, the police, contractors and law enforcement officers got back in their vehicles and drove off.

Asked why they did not demolish any structures, Siyabulela Mamkeli, the city’s Mayco member for Human Settlements, said that the structures that had been set up “during the night… appeared to be occupied, therefore they were not removed”.

As GroundUp’s previous field reporting has suggested, an assessment of what constitutes an occupied structure is down to the decision of an ALIU officer on the scene.

“I hope resistance is starting to make the city think twice.”

A victory, for some
For Ramahlele, the city’s decision not to destroy any shacks was unprecedented in his 18 months of eviction experience in Philippi.

“I have never seen this happen before,” he said. “Everytime the ALIU come, they break down people’s homes and take away the building material.

“I hope that this is a sign that the resistance to illegal evictions in Marikana is starting to make the City think twice … It is good that those people were spared and that they have a place to sleep tonight.”

Seboka Molete (29) moved to Mangaung two weeks ago when he could no longer afford rent as a backyard dweller in the nearby Lower Crossroads area.

“I am so happy because I know that I still have my shack,” he said. “I cannot go back to where I was renting, so I would have been left completely homeless if the City had evicted me today … This is a big victory, because they came for us, but the community stood strong and sent them away.”

Yet, for Zithle Mfazwe (24) whose shack was destroyed on Monday, the successful face off with the ALIU was bittersweet. Also resident at Mangaung for two weeks, she was visiting her sick four-year-old daughter when the ALIU stripped her shack and removed her building material. Her shack was empty, but not “unoccupied” when it was demolished, she says.

“That was my only place to call home,” she said. “But at least I am glad that they did not destroy my neighbour’s shack. That is where I sleep now. I am sad, because when my daughter comes home from hospital I would have liked to stay in a place that we can call our home, instead of crowded into a shack with another family.”