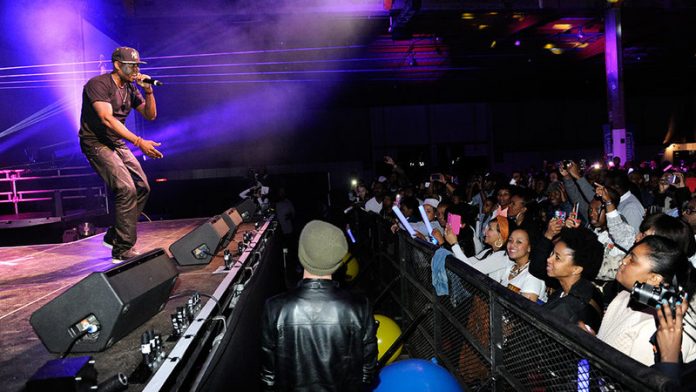 In what was yet another treat for hip-hop fans, this past weekend saw Stimorol hosting the #SeeWhatUnfolds Music experience as part of its new limited edition Berry Party chewing gum.

During the past year, artists such as Pharoahe Monch, Jean Grae, Nas, Timbaland and more have been brought to our shores courtesy of brands’ promotional campaigns. On Friday October 3, an intimate crowd gathered at Nasrec Expo Centre to watch live performances by Black Coffee, Ralf Gum, AKA and Talib Kweli with a surprise performance by Lil Jon who jumped onstage with Kweli to perform his party anthem Turn Down For What.

The line-up was enticing enough to make any fan want to get their hands on a ticket but the sound was bad enough to make you want to leave. The sound of the performers was drowned by speaker volume that was pushed to the maximum; causing the instruments and microphones to compete with each other, creating the most atrocious noise.

Once Kweli got on stage, he asked for two of the monitors to be turned off. And singer Shareese Renée Ballard, also known as Res (signed to Kweli’s record label Blacksmith Records), had to close her ears, or move to the back of the stage to be able to hear herself while performing vocals with Kweli.

Sadly, they couldn’t improve the sound, so you either had to move around the hall or close your ears to be able to make out the rhymes when he was freestyling.

Gimmicks
While it’s noteworthy that artists and producers work hard to create a memorable experience for their audience, a lot of the actual talent can get lost in the gimmicks of the performance. Black Coffee was joined onstage by a dancer who did nothing to enhance his set. She wasn’t entertaining, didn’t have any astounding dance moves and generally took away from the DJ whose music and mixing skills are more than enough. Her exit off the stage was happily welcomed when she was replaced with musicians on trumpets and conga drums.

And then surprisingly (well not really), AKA, who said he was done opening for international acts back in February, performed.

“That’s it! I’m done with opening shows for international artists that get superior treatment when performing in our country,” he tweeted. “It can only change once we stop feeling like it is a great honour to open for these artists.”

“I don’t think there actually is a need for local artists to open at these concerts – unless they grant the opportunity to up-and-coming artists,” he told the Mail & Guardian earlier this year. It was interesting to see how much influence he really draws from other artists and trends. He is notorious for not acknowledging his influences and comes off as quite arrogant in his belief that he is an originator rather than a follower.

He wore black shorts over torn leather pants, did the nae-nae dance, said “rrrrr” after a song, which reminded me of Khuli Chana’s signature performance sound “raaaaaa” – which actually eventually came, and his flow was reminiscent of HHP’s glory days. Oh and let’s not forget his Kanye West moment when he was joined by “ballerinas” onstage.

Though his performance – which is usually so impressive – was marred by bad sound, the lighting and visual effects as well as the live band added great flavour. One of the highlights of the evening was when Kweli, featured on Cassper Nyovest’s Doc Shebeleza remix, performed the track with Res.

Celebrating his 39th birthday on the night, Kweli also said: “I was with my man Cassper yesterday in Soweto and today I’m with my man AKA. I saw him perform here earlier. I understand AKA and Cassper have a problem, I have nothing to do with that, but put that beef to the side and unite for hip-hop in South Africa,” Kweli said to a cheering crowd. Kweli also said that he recorded a song with HHP while in the country.

“Ballerinas” perform with AKA at Johannesburg’s Nasrec Expo Centre. (Supplied)

Can we get more South Africa in our hip-hop? It’s time to stop picking up stompies.

Talib Kweli Q&A: ‘Nah son … the world owes you nothing’

Talib Kweli: A Hip Hop name you must know!