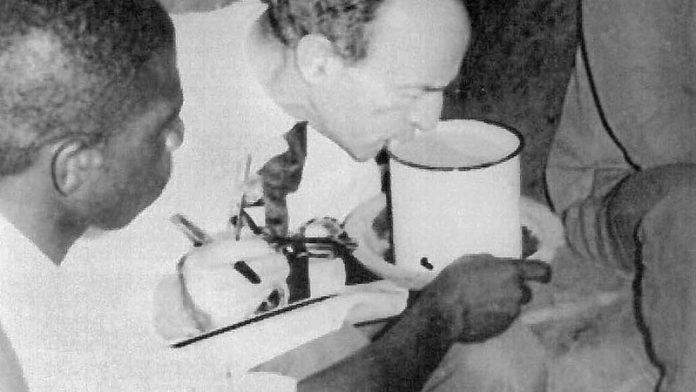 The historical profile of Dr Michael Gelfand – a colonial Southern African doctor – offers a unique opportunity not only for comprehending our past medical history but also for thinking about and sorting through some of the issues pertaining to the emerging multidisciplinary field of medical humanities in Africa, especially as regards fostering mutual dialogue between the biomedical sciences and the humanities.

One of the main objectives of introducing medical students to medical humanities education is to help to boost their clinical acumen by equipping them with a range of skills offered by the humanities. In other words, humanities education should provide them with other epistemological frameworks necessary for thinking about their patients in their broader human contexts.

Gelfand seems to have done that, and a great deal more: he distinguished himself by his deep interest in medical anthropology, medical history, medical philosophy and medical ethics. This was in addition to his primary interests in general and tropical medicine, pathology and radiography. That the context in which he practised was colonial adds an interesting dimension to his story.

Born in Cape Town in 1912, of Jewish immigrants from Lithuania, Gelfand studied medicine at the University of Cape Town and in London, where he achieved his Membership of the Royal Colleges of Physicians in 1938, and a qualification in radiology in 1939. His migration that same year to then Southern Rhodesia (colonial Zimbabwe) followed his marriage commitment to a Rhodesian, Esther Kollenberg.

On his employment Gelfand was given primary responsibilities in radiology and pathology. He also assumed responsibility as the physician in charge of the African wards at the old Salisbury Hospital. Through this initial contact with ethnic Shona patients, he began what turned out to be a lifelong research interest in the nature of the diseases that afflicted them, as well as their culture, philosophy, religious beliefs and culinary habits.

At the end of his life after 40 years of clinical and fieldwork research among Shona communities, Gelfand had published more than 30 books and in excess of 300 articles. In 1955 he also initiated the founding of a medical journal, the Central African Journal of Medicine, which he edited until his sudden death in 1985.

Professional profile
These research accomplishments helped to advance his academic and professional profiles. In 1957, he was promoted to specialist physician, and in 1962 the newly formed University College of Rhodesia’s Medical School appointed him as professor of medicine, with special reference to Africa.

He also received international accolades for his medical and philanthropic work, with a 1977 bestowal of the Papal Knighthood of the Order of St Sylvester being the most prominent because it is rarely conferred on non-Catholics.

Delving into the essence of his work reveals the great potential as well as the limitations that lie at the intersections of biomedicine and the humanities. Gelfand’s first major concern seems to have been the production of culturally informed clinical manuals that could facilitate practice among “The Other”. His first books, The Sick African (1944) and African Medical Handbook (1947), exemplify this initial preoccupation.

His well-known splash of the 1950s was Tropical Victory, a widely castigated book that today is taken as a perfect example of an unashamedly celebratory colonial medical historiography, but it was also clear that he was turning his hand to the ethnographic study of his African patients, with the assistance of missionaries and officials from the native affairs department.

Much of his anthropological work became available in the 1960s and 1970s following 15 years of extensive fieldwork among the different Shona subgroups, including the Korekore, Zezuru, Manyika and Karanga.

Colonial prejudice
At surface value it is easy to relate Gelfand’s work to the broader interests of colonial science, medical power and colonial ethnography. In a critique of The Sick African, Hillel D Braude, a medical philosopher and bioethicist, charged in 2009 that the “book provides testimony about the structure of colonial prejudice associated with beneficence that continues in a transmuted form in the postcolonial context”. Some contemporary professional social scientists also rapped him for what they considered to be a cavalier attitude to ethnographic research.

Indeed, Gelfand initially held decidedly negative views of African patients and indigenous healers. He criticised Africans for their primitive ways of life, which he said exposed them to health risks, and indigenous healers for disregarding the laws of science, especially pathology. He clearly held them to inappropriate Western scientific standards.

But his extensive ethnographic and historical work among rural communities later helped him to overcome his earlier prejudices. He began expressing admiration for the humanistic African way of life that stood in stark contrast to crass Western materialism and individualism. To him, Africa was rich in moral and spiritual depth. Gelfand also came to acknowledge that African traditional healers were shrewd herbalists and psychologists.

Rational beliefs
Speaking soon after receiving an honorary doctorate from the University of Cape Town in 1978, he admitted having initially “accepted the prevailing, preconceived idea that all African peoples were backward, and that their religion and moral code were primitive”. But through his research he had “found that the traditional beliefs of these people were as rational as those of other faiths of the Western world”.

He eventually discovered that African diet was balanced, nutritious, and not abundant in refined sugars and cholesterol as is the Western diet. The African diet was rich in fibre, and those living on it rarely suffered from peptic ulcers, acute appendicitis, gallstones or even cancer of the large bowel.

In conclusion, Gelfand achieved distinction because of his humanistic approach to medical practice. His profile helps to demonstrate the huge potential of the medical humanities.

But it also serves as a warning: lack of in-depth knowledge about other cultures can be detrimental in that it leads to prejudicial conclusions. In postcolonial and post-apartheid societies there is an urgent need for the right conceptual tools and linguistic registers for critically appraising one another’s cultures.

Dr Glen Ncube is a postdoctoral fellow in the department of history, College of Human Sciences, Unisa