Waiting for change at Lindela 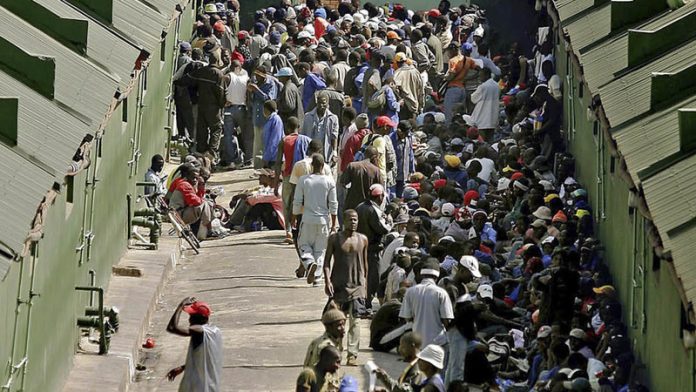 After nearly two decades of criticism, flouted laws and disturbing reports, there seems to be a promise of change at the infamous Lindela Repatriation Centre.

In September the South African Human Rights Commission (SAHRC) stepped in and said it required a long list of specific actions by the department of home affairs – the department responsible for the deportation of illegal immigrants – that will in effect make the commission responsible for oversight of Lindela. Wielding its constitutional power the SAHRC asked home affairs to:

Although those measures are technically recommendations, the SAHRC has a range of seldom-used powers it can invoke to require compliance. Its hand was considerably strengthened in late August, when the high court in Johannesburg ordered that the commission must be granted access to and furnished with reports on Lindela at least once every three months, in the latest of a string of court cases the government not only lost, but lost with costs awarded.

The SAHRC “recommendations” and accompanying court order come against a generally promising background.

On the diplomatic front South Africa remains keen to wield influence at the African Union, where it requires the backing of the countries from which almost all those who pass through Lindela hail.

The operational contract with Bosasa, the private operator that manages Lindela, ends in 2015, adding pressure on the company to avoid criticism.

Politically, the still relatively new Home Affairs Minister Malusi Gigaba, at 43, has a potentially long career ahead of him and follows Naledi Pandor, who was widely praised for improvements during her tenure in the services the department renders to South Africans.

However, measured against history, the odds for change seem slim.

Source of shame
For most of its 18 years of operation Lindela, which means waiting, has been a unique source of shame for South Africa. International human rights organisations point to it as proof that apartheid still lives on for foreigners. Local civic organisations describe it as a place where the law simply does not apply. And during all that time little has improved, as promises were broken and commitments reneged on.

Over the years home affairs has simply ignored strict legal limits on how long it may detain foreigners, failed to honour court orders, and reneged on promises both specific and general.

Lindela opened its doors in August 1996, using an adapted old hostel compound left behind when the tide of gold mining receded from Krugersdrop and surrounds. That history, of a type of housing notorious for the abuse mine workers suffered in it, was not lost on investigators, who almost immediately started receiving complaints from inmates.

By 1997 the SAHRC reached for apartheid imagery to describe, in a formal report, the aggression and hostility faced by new arrivals. “The inmates’ names were shouted out at them and they are expected to act in concert with the commands from the officials,” the commission said. “The situation is reminiscent of the old pass law offices or some military barracks.”

By 1998 Human Rights Watch was openly trying to shame the government into reform in the treatment of illegal immigrants in general and asylum seekers in particular by pointing out parallels between the treatment of people at Lindela and that of black people under apartheid. Little changed as a result, and no other approach seemed to make a dent either. In 2005 a group of visiting Zimbabwean pastors described Lindela as a “concentration camp”.

Médecins Sans Frontières has complained about conditions in the centre for years, and also about the fact that it was simply denied access to Lindela. In 2010 Lawyers for Human Rights reported on complaints of lice and a lack of soap, and a total ban on books in the facility. Complaints have come from Amnesty International, the High Commission of Human Rights and a United Nations working group on arbitrary detention.

Sporadic riots and hunger strikes over the years have attracted other attention, but those able to intervene never seemed to encounter the conditions inmates invariably report. After a 2004 visit Parliament’s home affairs committee said the media was blowing matters out of proportion and that conditions were satisfactory. After a 2013 tour Pandor declared herself satisfied with the centre.

Neither Parliament nor the minister had any comment on allegations of what amounts to torture, or the many former inmates who succumb to TB or Aids once they have been shipped home, diseases their families say were contracted in Lindela or inadequately treated while they were housed there.

The SAHRC on Wednesday said it was “pleased” with the response it had received to its recommendations to the home affairs department, and planned to meet Gigaba “in due course to discuss the details around monitoring of the centre and the remaining recommendations around protocols for access by civil society organisations”.

The law is clear but it is ignored

The law is simple, and has been so for more than a decade: illegal immigrants may be held for 30 days as efforts are made to deport them and, if a court issues a warrant, they may be held for 120 days. After that there is no wiggle room, no possible extensions and no excuses, because South Africa considers it manifestly unfair to hold someone for more than four months when their only crime is not having the correct papers. At Lindela that law does not apply.

Numbers are often hard to come by but during its investigation this year the South African Human Rights Commission (SAHRC) obtained six detainee lists for Lindela. From that historical data it was able to report that 52 people had been at the centre for more than the 120-day maximum period. Four had been at Lindela for more than 300 days. The record-holding inmate had been held for a little over 13 months.

Courts have been telling the department of home affairs since February 2000 that such lengthy detentions are illegal. Lindela has been in more or less continuous contempt of court ever since.

“In spite of these judicial pronouncements, the respondents still persist in detaining illegal foreigners for more than 30 days and a maximum of 120 days without valid warrants having been issued,” the high court in Johannesburg said in August.

For the full duration of four different government administrations the department of home affairs has argued that it cannot adhere to the law because foreigners tend to be “shifty”, and their governments are bad at administration.

Those who spend a long time at Lindela do so because they refuse to tell officials from which country they come from, the department again told the court this year, and sometimes because their embassies either will not co-operate or cannot issue emergency travel papers within four months.

But, as in the past, home affairs again provided no evidence of these allegations, and failed to convince the court that it has done anything to fix diplomatic problems over the past 15 years. Judge Moroa Tsoka said that counsel for the department could not “advance any cogent reasons why political pressure could not be exerted on the relevant embassies to co-operate”.

The courts have not been alone in their inability to effect change at Lindela. In 2012 Constitutional Court Judge Edwin Cameron, a noted HIV activist, got into something of an argument with officials at Lindela during a visit to the centre. When he pointed out that no condoms were available to inmates (who are segregated by sex) he was told, “it will promote sexual behaviour”. Cameron’s displeasure eventually elicited a promise that condoms would be provided.

Two years later the SAHRC noted, as the first specific healthcare area that should be addressed at Lindela, “the lack of availability of condoms”.

‘The family needs to see Sino’s bones, so we can be released from this pain’