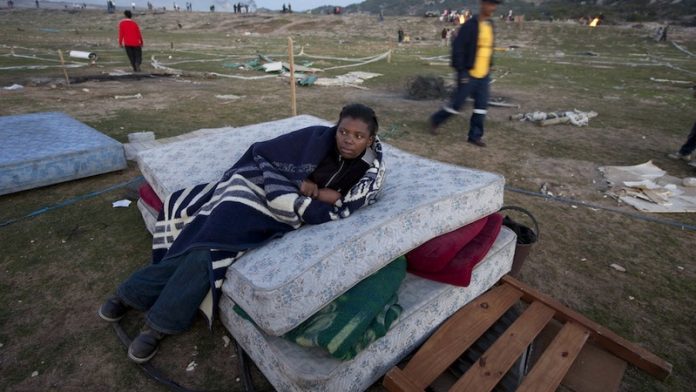 The ANC and the Democratic Alliance always bicker over the cause of land occupations and who promotes them for political gain. Yet looking at their actions more deeply, it becomes clear how similar the two parties really are.

Cape Town: During the first two weeks of August, thousands of backyard dwellers living in dire conditions occupied vacant land near the Marikana settlement in Philippi East. Over the following days, the City of Cape Town’s Anti-Land Invasion Unit (ALIU), with the support of hundreds of labourers and police officers, made illegal attempts to evict all the occupiers.

The steadfast resistance from this large new community forced the eviction contingent to abandon their demolition operations, or risk increased publicity of their repressive violence.

Durban: For much of September, the land occupations of Marikana in Cato Crest and Sisonke village near Lamontville had been growing. New homes were repeatedly erected by desperate families subsequent to the city’s illegal evictions that destroyed large parts of these settlements.

As in Cape Town, eThekwini’s Land Invasion Unit returned multiple times to demolish people’s homes without a court order. Two weeks ago, the ANC mobilised their own extralegal team of party members to threaten residents and destroy more homes in Marikana and Sisonke.

There are differences between the situations in the two cities. For instance, in Durban, land occupations tend to be smaller and often closer to middle-class areas. Community leaders involved in these occupations and other housings struggles face threats from local structures associated with the ANC. The assassinations of Thembinkosi Qumbelo, Nkululeko Gwala and Thuli Ndlovu and the ongoing threats against Abahlali baseMjondolo leaders Ndabo Mzimela and S’bu Zikode are examples of the repressive climate in this city.

In Cape Town, none of these land occupations happen in middle-class or wealthy neighbourhoods. This is partly because of the city’s vigorous response: the deployment of well-funded quasi-militarised demolition teams. This has led to increased build-up of desperate backyard dwellers and the spontaneously large occupations of Siqalo and Marikana-Rolihlahla.

Yet, in the never-ending electoral politicking that plagues a party-based system, the ANC and the DA take strikingly different stances on land occupations in the cities they govern as opposed to cities in which they are in opposition.

When in power
In Cape Town, the DA-led municipality unequivocally condemns the mass appropriation of land by the poor and the ANC quietly supports them. In contrast, in Durban, the ANC-led municipality responds harshly to any occupation, whereas the DA condemns the actions of the city as brutal and illegal.

Take the statement by Cape Town’s security czar, JP Smith, on the August takeover of land in Philippi East: “There has been a concerted effort to invade both private and public land across the city of Cape Town as a means to promote lawlessness and in an attempt to make the city ungovernable. We believe that the situation playing out in Philippi East is an example of these determined efforts to promote the illegal occupation of land for political objectives …

“The city of Cape Town condemns the invasion of private and public land as it is of paramount importance to maintain a fair and systematic housing delivery regime.”

“The eThekwini municipality will not stand idle and watch people illegally construct informal dwellings on government-owned land that has been preserved for future development.”

“Nxumalo issued a stern warning this week after the municipality’s Land Invasion Unit demolished 40 illegal structures that were under construction in Cato Crest on Sunday October 12.”

One can see from these and other statements by party officials, and from the actions of the eThekwini and Cape Town governments, that there is no substantial difference in their official policy on land occupations.

What is interesting, however, is that, when in opposition in a municipality, both parties’ politics on the matter change dramatically.

When in opposition
In Cape Town, local ANC leaders often support mass land reclamations when they are linked to ANC-friendly groups such as the South African National Civic Association and Ses’khona. These occupations are seldom organised by these organisations.

Yet Ses’khona gets significant support for its defence of shack dwellers’ rights because of its access to ANC-linked resources. This is true, for instance, in the case of the new Marikana-Rolihlahla occupation next to the original Marikana settlement. Organised by backyard dwellers in August, Ses’khona only became involved after the illegal ALIU demolitions caused a public outcry.

“The ANC condemns the eviction of people of Lwandle informal settlement by the Cape Town metro without being given alternative accommodation as required by the law. It is evident that the eviction has been meted out as a punishment to this community for not voting for the DA.”

By supporting these occupations through groups and publicly defending those being evicted, the ANC raises its activist profile while damaging the DA’s reputation in these communities.

Like the ANC in Cape Town, the DA will not officially endorse land occupations – that would frighten their privileged funding base. Yet when shack dweller organisations such as Abahlali baseMjondolo face repression and demolitions in places such as Marikana and Sisonke, the DA vocally condemns the arbitrary and illegal evictions of these communities.

In these cases the DA in effect backs shack dwellers engaged in land occupations and defends their constitutional rights to housing over and above property rights – something the party would never do in Cape Town.

Though Abahlali’s leadership are not DA members and the movement retains its ideological autonomy, the DA is able to use Abahlali’s tactical 2014 electoral endorsement of the DA, as well as sympathy for Abahlali land occupations, to mobilise electoral support in poor communities that traditionally vote ANC. Here, for instance, is an excerpt from a local DA press statement calling for a commission of inquiry into the recent Cato Crest evictions:

“It is completely unacceptable for eThekwini to ignore the law and their obligations to protect people’s rights during evictions.

“It is equally unacceptable for the MEC to continue standing idly by as municipalities violate peoples’ rights in order to implement his mandate.”

The progressive findings of the Lwandle commission, backed by ANC heavyweight Lindiwe Sisulu, could, in theory, play a role in preventing further illegal evictions by the ANC in Durban. Yet, in practice, as with most inquiries, the commission’s recommendations will probably be used to score political points against the DA in Cape Town but be ignored throughout the rest of the country.

Ambition for state power
Politics is a dirty game. We all know this – and no one understands this better than politicians themselves. Principles are rarely, if ever, non-negotiable; political parties are nearly always willing to forsake their beliefs to build electoral support. In this, the ANC and DA are two sides of the same coin.

We should not forget that when the ANC was first unbanned in 1990 it adopted the slogan “Occupy the cities” and supported land occupations en masse. As soon as it came to power, however, the ANC made land occupations a crime.

The Economic Freedom Fighters support urban land occupations to promote their programme of land redistribution. But it is only when the EFF wins power in municipalities that we will be able to see whether it will break with the DA and ANC approach to land occupations.

The problem here is not merely that political parties are disingenuous when they claim to support land occupations and other forms of struggle (note: here I make no judgment of the individual politician’s honesty).

It is also that the ambition to take state power always trumps consistency and principle, especially when it relates to the needs of nondonors – that is, the poor. It is no prevarication to claim that power tends to corrupt.

This is why it is so important that movements that encourage land reform remain independent of political parties, lest they be subsumed by the inevitable and contradictory doublespeak of political party agendas.

Jared Sacks is a social justice activist, journalist and founder of a nonprofit children’s organisation.