R2m bottle of whisky ‘is overpriced’ 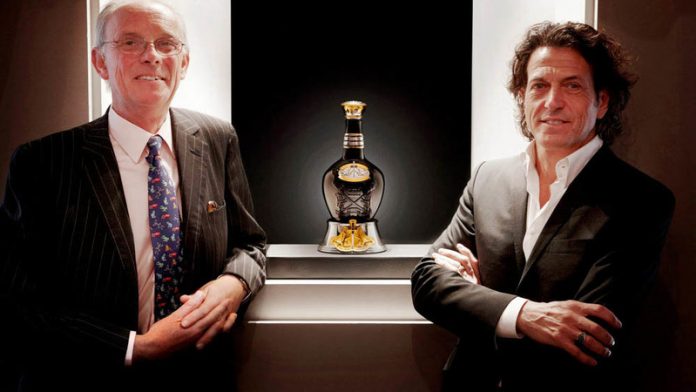 The second most expensive bottle of whisky in the world costs $200 000 and you can pick up the last bottle at your local Makro.

Mark Backhouse, Pernod Ricard’s South Africa spokesperson, said this week that the fetish bottle, called the Tribute to Honour, by Scotland’s Chivas Brothers distillery, is to the aristocrat what a pair of limited edition Guess jeans (R2 000) are to the middle class.

“Many of the people who can afford to have this – the people that we love to hate – think ‘Oh well, it’s only R2-million’,” he said.

Backhouse reckoned the whisky – a blend of rare whiskies from the Royal Salute Vault at Strathisla, a distillery in the town of Keith, in Scotland’s famous whisky producing region of Speyside – probably cost about R500 000, with the rest being spent on the bottle.

The bottle is not glass, but black porcelain with a coat of arms in relief. The bottle rests on a silver stand. Both the bottle and the stand have coats of arms: lions of gold and a silver sword into which black and white diamonds have been inlaid. Diamonds also encrust the enclosure.

Colin Scott, Royal Salute’s master blender, prepared 21 bottles. Nineteen have been bought, and one is behind the thick glass of a cabinet at the distillery.

That leaves the bottle at Makro.

Labour of love
Quoted in the publicity material, Scott said making the whisky had been a 45-year “labour of love”. The Whisky was so “gloriously smooth and formidably powerful it leaves you speechless”.

He should know because he and the buyers are the only people to have ever tasted it.

If you buy the bottle at Makro, you won’t have to open it – at least not straight away. It comes with a smaller bottle so you can actually have a taste of the liquid gold.

Backhouse said that according to the treasury’s tax tables, there are about 63 000 high net worth South Africans who earn more than a million a year and who could, presumably, afford the bottle.

Backhouse likened the middle class’s criticism of excessive spending on whisky to what the working class might see as wasteful expenditure when “they see their employers coming home with a trolley full of Woolworths groceries at the end of every month”.

Bragging rights
Valentine Maseko, a manager of speciality store WhiskyBrother in Hyde Park, is not impressed by what he called the “overpriced” Tribute to Honour.

“It definitely doesn’t make sense. That Chivas is a blended whisky, not even a single malt. A blended whisky is cheaper to make,” he said.

“This is subliminal programming. That’s why people think Johnnie Walker Blue and Jameson are good brands. Diageo and Pernod Ricard [owners of Johnnie Walker and Jameson] are big commercial companies and they throw money at marketing and advertising.”

Maseko said those who bought Tribute to Honour would pay for the “bragging rights” but, he added, “it can still be considered an investment because whisky prices always appreciate”.

Local is lekker
Steve Adams, owner of the Wild About Whisky bar, which has the biggest selection of whiskies in Southern Africa, said he would buy a bottle of Bain’s, a single grain whisky made in the Western Cape, before he bought the Tribute to Honour.

“We have had a great deal of interest and engagement with customers about this exciting offer, mostly at store levels. There are very few serious customers.”

The water of life plays Hyde and chic

Win with Chivas Regal and the M&G

The Mail & Guardian in association with Chivas Regal is giving readers the chance to win a bottle of limited edition 12-year-old Chivas Regal.
Read more
Friday

A distiller producing premium brandies, vodkas and other spirits has found his niche.
Read more
Advertising
Continue to the category
Politics