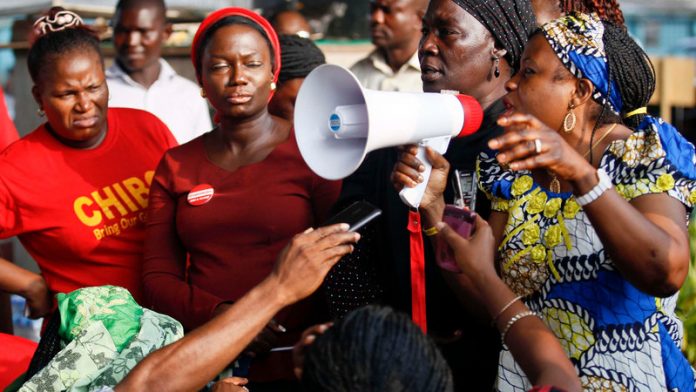 Nigeria aims to have secured the release of 200 girls kidnapped by Islamist Boko Haram militants by Tuesday, a senior source at the presidency told Reuters on Saturday, although he declined to comment on where the transfer would take place.

“I can confirm that FG [the federal government] is working hard to meet its own part of the agreement so that the release of the abductees can by effected either on Monday or latest Tuesday next week,” the source told Reuters by telephone.

Officials at the presidency and the military did not immediately respond to a request for comment.

Boko Haram, which conveys messages in videotaped speeches by a man claiming to be its leader, Abubakar Shekau, has also not yet commented on the ceasefire.

Officials and campaigners anxiously awaited further news about the fate of the schoolgirls after Nigeria claimed to have reached a deal with Boko Haram militants to secure their release.

Chief of Defence Staff Air Marshal Alex Badeh told senior military officials from Nigeria and Cameroon meeting in Abuja on Friday that a “ceasefire agreement” had been concluded between the government and the insurgents.

“I have accordingly directed the service chiefs to ensure immediate compliance with this development,” he added.

Badeh’s announcement came after a senior aide to President Goodluck Jonathan, Hassan Tukur, said an agreement to end hostilities had been reached following talks, as well as for the release of 219 girls held captive since April.

But a precedent of previous government and military claims about an end to the deadly five-year conflict and the fate of the missing teenagers left many observers cautious.

Political boost
Jonathan is expected to declare his bid for re-election in the coming weeks and positive news about the hostages and the violence would likely give him a political boost.

Shehu Sani, a Boko Haram expert who has negotiated with the group on behalf of the government, said he had “never heard” of Danladi Ahmadu, whom Tukur claimed represented the militants at talks.

“Government wants to negotiate but so far nobody has come forward who speaks for Shekau,” he told a Chatham House conference in Abuja on Monday.

The Nigerian government’s own security spokesperson, Mike Omeri, also said that no deal had yet been reached on releasing the girls.

‘Incredibly promising’
The United States said it could not confirm whether a deal had taken place.

“Obviously, we would welcome an end to hostilities, a restoration of security and, I think it should go without saying, would welcome the release of those girls that have been gone far too long. But we cannot independently confirm that at this point,” said State Department spokesperson Marie Harf.

“This ceasefire is incredibly promising but we aren’t there yet – until every girl is released negotiations must continue,” added Hussaini Abdu, the country director for ActionAid Nigeria.

Tukur said he represented the government at two meetings with the Islamists in Chad, which were mediated by the country’s President Idriss Deby.

“Boko Haram issued the ceasefire as a result of the discussions we have been having with them,” said Tukur, adding that Ahmadu made the announcement on Thursday evening.

“They have agreed to release the Chibok girls,” he continued, referring to the girls seized in northeast Nigeria on April 14, causing global outrage.

‘Huge expectations’
Leaders of the Bring Back Our Girls campaign, which has been pressuring the government to act, gave a cautious welcome to a possible release.

“We are monitoring the news with huge expectations,” they said on Twitter.

Ndjamena refused to comment but security sources in the country said Chad, which Jonathan visited for talks with Deby early last month, had been involved in the discussions.

The source also said a ceasefire agreement was reached as well as the release of 27 hostages, 10 of them Chinese nationals, who were kidnapped in northern Cameroon earlier this year.

The release of the hostages last weekend was “a first strong signal” from Boko Haram to prove their good faith, the source added but did not mention the schoolgirls.

Cameroon announced on Friday that eight of its soldiers and 107 Boko Haram fighters were killed during fierce fighting in its far north region on Wednesday and Thursday.

A police officer said at least 30 civilians had been killed by Boko Haram before the military ambush.

Vague on details
In Nigeria, unidentified gunmen on Friday killed eight people on a road near Shaffa village in Borno state, two local residents said, but it was not clear if the attack was by militants.

The incident, however, happened near where a prominent Muslim leader, the Emir of Gwoza, was killed by Boko Haram militants in May.

Ahmadu gave an interview broadcast on Friday on the Hausa language service of Voice of America radio in which he claimed to be the group’s “chief security officer” and in charge of publicity.

He made no mention of an end to hostilities and was vague on details of the apparent talks, even claiming not to have met Shekau.

He also referred to the jihadi group as Boko Haram, a name that means “Western education is forbidden”, which was imposed on the Islamist radicals by outsiders. The insurgents themselves never use the term.

The group’s known leaders have exclusively used the name Jama’atu Ahlis Sunna Lidda’awati wal-Jihad, which means “People Committed to the Propagation of the Prophet’s Teachings and Jihad”.

He made no reference to the Chibok girls and did not list the creation of an Islamic state in Nigeria’s mainly Muslim north – the core, unwavering Boko Haram demand since the uprising began.

Shekau has in a series of video messages since 2012 ruled out talks with the government and said northern Nigeria will never know peace until sharia law is strictly enforced.

Envoys from Nigeria’s presidency have made similar ceasefire claims in the past, notably Jonathan’s Minister for Special Duties Taminu Turaki, who led a so-called amnesty commission in 2013 that was tasked with brokering peace.

But nothing materialised from Turaki’s protracted negotiations. Shekau said that he never sent delegates to any talks and attacks continued at a relentless pace. – Reuters, AFP