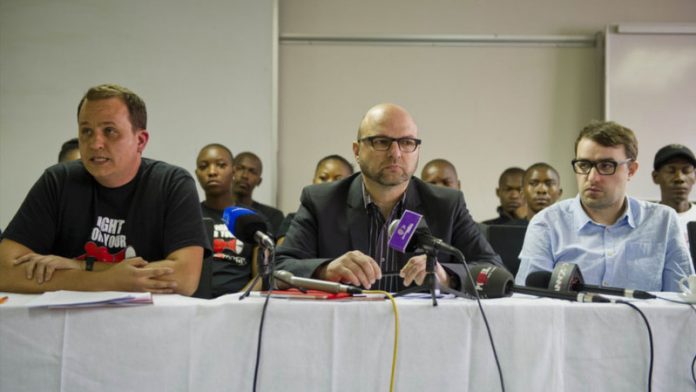 Hennie Van Vuuren is currently a researcher at the Institute for Justice and Reconciliation and co-author of The Devil in the Detail: How the Arms Deal changed everything.

Van Vuuren and co-researchers Paul Holden and Andrew Feinstein withdrew their participation in the commission in August, claiming they were refused access to documentation and labelling the probe a “whitewash”.

Despite this, the commission re-issued their subpoenas and scheduled their testimonies for this week.

Van Vuuren, represented by Lawyers for Human Rights, refused to give evidence on Monday and also declined the opportunity to meet with his evidence leader.

His legal counsel, advocate Geoff Budlender, read out a letter from Van Vuuren explaining his reasons.

Van Vuuren said the commission represented an “historic opportunity” to support the struggle in South Africa for transparency and accountability. He also believed civil society had a duty to support state bodies in their execution of the law.

But Van Vuuren said he had provided the commission with a large body of evidence and had pointed it to additional documentation.

Budlender said the commission’s act allowed witnesses to refuse to co-operate with it if they could show “sufficient cause”, which Van Vuuren believed he had.

Reasons for refusal
There were four reasons why Van Vuuren felt he had sufficient cause to refuse to participate further.

Firstly, he said he had been refused access to evidence, an issue which he and other witnesses had tried for 18 months to resolve. This included evidence from law enforcement investigations into the arms deal, which witnesses were promised access to in their initial subpoenas, he said.

Secondly, some “crucial documents” were ruled “inadmissible” by Judge Willie Seriti. This included a report commissioned by arms dealer Ferrostaal into its own criminal liability in the arms deal. Its inadmissibility meant it could not be relied upon by witnesses, Van Vuuren said.

Thirdly, he said the commission had ruled that witnesses could not speak about evidence they themselves had not witnessed. Therefore, only evidence from participants in the arms deal itself would be considered.

“This means only those who have been corrupted, who have corrupted others, or who were intermediaries in such corruption, can give evidence of it. It is obvious that all of these parties have an interest in hiding the truth. Why should the commission choose to rely solely on their opinions?” Van Vuuren asked.

Lost trust in process
Lastly, Van Vuuren said the commission had lost the public’s trust and his participation in it would only serve to lend credibility to a damaged institution.

Recently, 40 civil society organisations called for the commission to be disbanded.

Seriti said it was not the first time he had heard these allegations and briefly adjourned the commission to give legal teams time to review Van Vuuren’s statement. However, Seriti said his only intention when re-issuing Van Vuuren’s subpoena was to give him an opportunity to present the evidence he claimed to have collected.