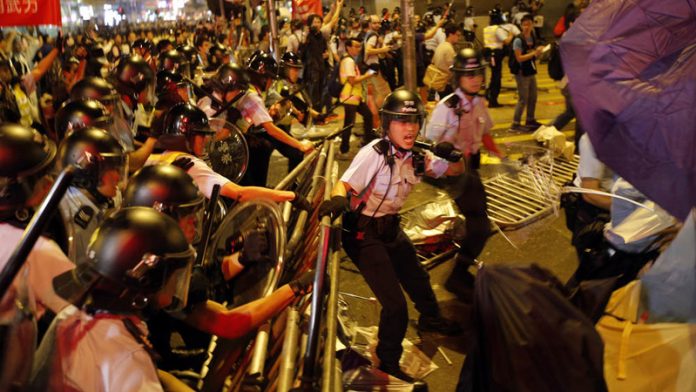 The panel chosen to select candidates for Hong Kong’s 2017 election could be made “more democratic”, the territory’s leader said on Tuesday, the first indication of a possible concession to pro-democracy protesters who have blocked city streets for weeks.

Leung Chun-ying was talking just hours before the start of formal talks between student protest leaders and city officials aimed at defusing the crisis in the former British colony that returned to Chinese rule in 1997.

“There’s room for discussion there,” he told a small group of reporters. “There’s room to make the nominating committee more democratic.”

In August, Communist Party rulers in Beijing offered Hong Kong people the chance to vote for their own leader in 2017, but said only two to three candidates could run after getting backing from a 1 200-person nominating committee, which happens to be stacked with Beijing loyalists.

The protesters decry this as “fake” Chinese-style democracy and say they won’t leave the streets unless Beijing allows open nominations.

Discussion of the potential concession from Leung could only start later in the year, however, when the city government launches a new round of consultations for electoral methods, he told reporters in a conference room in his office building.

Expectations low
After more than three weeks of demonstrations that have snarled traffic, and mostly tough talk from Leung and other government officials, expectations are low for a major breakthrough in Tuesday’s talks.

The protests have sparked occasional scuffles between demonstrators and the police, who once fired tear gas on the crowd and have also used pepper spray and batons, but have not attempted to clear the streets.

Leung warned, however, that such action “could take place whenever the police see it as necessary. It is their duty to maintain law and order in Hong Kong”.

He declined to say if there was a deadline for clearing the protesters from city streets and said the government did not have “any instructions from Beijing”.

But Leung said he believed that people of Hong Kong were losing patience with the protests and could take matters into their own hands.

Numbers game
In blunt remarks on Monday that could inflame students, Leung told some foreign media that free elections were unacceptable partly because they risked giving Hong Kong’s poor and working class a dominant voice in politics.

“If it’s entirely a numbers game and numeric representation, then obviously you would be talking to half of the people in Hong Kong who earn less than US$1 800 a month,” Leung told the New York Times, the Wall Street Journal and the Financial Times.

“Then you would end up with that kind of politics and policies,” added Leung, warning of the dangers of populism and insisting that the electoral system needed to protect minority groups.

Critics say the political system already favours the rich in Hong Kong, which has one of the biggest wealth gaps in Asia and where the vast majority of people cannot afford their own home.

Leung will not take part in Tuesday’s talks. Instead, he will send five envoys, including Hong Kong’s number two official, Chief Secretary Carrie Lam. The talks are being broadcast live at the insistence of student leaders to make the debate on democracy public.

“This is an historic moment because it’s the first time ever in Hong Kong that a group of protesters are able to sit on an equal footing with the government, to say: ‘we don’t agree with you, we want democracy’,” said Nathan Law, a member of the Hong Kong Federation of Students.

Giant screens have been set up in protest zones to beam the talks to demonstrators.

The government cancelled talks scheduled for earlier this month after the students called for the protests to expand.

Streets calm after clashes
Hong Kong’s streets have been calm after dozens of people were injured in two nights of clashes over the weekend in the Mong Kok shopping district, including 22 police.

Besides Mong Kok, where demonstrators remain, about 1 000 protesters are camped out at the headquarters of the civil disobedience “Occupy” movement on Hong Kong Island in a sea of tents on an eight-lane highway beneath skyscrapers close to government headquarters.

Hong Kong is ruled under a “one country, two systems” formula that allows it wide-ranging autonomy and freedoms and specifies universal suffrage as an eventual goal. But Beijing is wary about copycat demands for reform on the mainland.

Leung told the foreign newspapers that Hong Kong had been “lucky” that Beijing had not yet felt the need to intervene.

The Hong Kong leader appears hamstrung, unable to compromise because of the message that would send to Chinese on the mainland, while using more force would likely only galvanise the protests. – Reuters

As the country prepares for elections, the president is misusing state machinery to undermine, subjugate and repress citizens and civil society organisations
Read more
Africa

Citizens have for a year protested against the president seeking a third term in office despite a two-term limit. Many have been killed — and 90 more people died in this week’s crackdown
Read more
Opinion

COMMENT: For this gay, white soldier there simply isn’t a good enough challenger to knock him off his perch
Read more
Africa

Too often, governments talk the talk on gender equality, but fail to walk the walk
Read more
Advertising