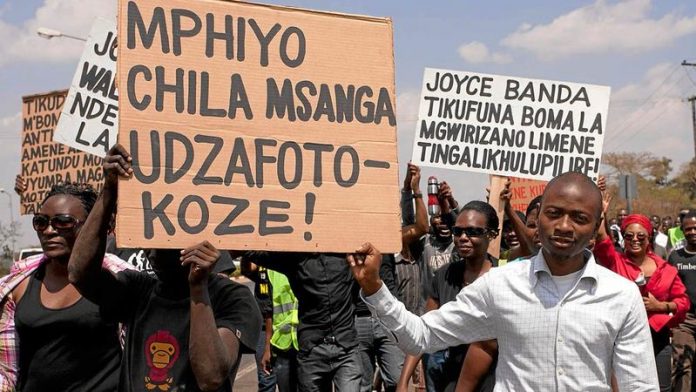 Malawian prosecutors will next week begin combing through hundreds of telephone calls made by former president Joyce Banda in a bid to find a link between her and three former top government officials who allegedly plundered the public purse in the $48-million Cashgate looting scandal.

A high court order last week gave prosecutors the go-ahead to examine logs and call transcripts spanning the period from January to December 2013.

Malawi’s graft-busting body, the Anti-Corruption Bureau, is investigating the disappearance of more than $48?million during Banda’s two-year rule and $214-million that vanished during the eight-year reign of former president Bingu wa Mutharika.

The records will be examined after the state’s chief accused, businessperson Oswald Lutepo, who pleaded not guilty to money laundering, theft and attempted murder charges, asked the high court to order the release of Banda’s phone calls.

He maintained that the logs would show he was innocent and that Mphwiyo, Bophani, Assani and Banda had a case to answer. Assani has not been charged. On Wednesday the bureau arrested Bophani and charged him with money laundering and theft. Last week, it arrested Mphwiyo and his wife on charges of theft, money laundering and defeating the ends of justice.

Awaiting trial
Although a number of Banda’s senior party members and government officials have been fingered in various local media reports, the government has arrested only one former Cabinet minister and several senior and junior civil servants.

Among those awaiting trial is a former justice minister under Banda, Ralph Kasambara, who is accused of money laundering and the attempted murder of Mphwiyo.

Last week, the high court convicted and jailed Teresa Senzani, formerly the principal secretary in the ministry of tourism, for three years for stealing $150 000. Senzani is the first high-profile person to be jailed in the Cashgate scandal.

Banda became president in April 2012 following Mutharika’s death. She had been Malawi’s vice-president.

A report by a British audit firm Baker Tilly, which was hired by Banda to audit a number of government departments between April and September last year, reportedly showed that 16 companies were paid $15?million for services or goods that were not supplied. The report was not made public.

Germany pledges millions
Last week, Germany pledged $25-million to the Malawian government for an audit to cover the period from 2009 to 2012. The Baker Tilly report, funded by the British, only covered certain ministries and departments that were under suspicion.

Minister of Finance, Economic Planning and Development Goodall Gondwe said the Germans were yet to release the funds to the treasury, so it was not known when the investigation would begin.

Cashgate came to light in September last year, when unknown gunmen shot Mphwiyo in the head three times at his home. He survived after Banda’s government airlifted him to South Africa for treatment.

Kasambara and Lutepo are accused of attempting to murder Mphwiyo.

At the time of the shooting, Banda publicly said she knew the gunmen and claimed they wanted to silence Mphwiyo, a man she touted as her anticorruption crusader. She later retracted the statement after calls from civil society and donors to prosecute the gunmen.

Mphwiyo told the high court that prior to the shooting, Kasambara, Homphally Makande (a former publicist with Banda’s party) and accomplices Pika Manondo and Patrick Gadama had tried to force him to approve an unauthorised payment of $22-million to several companies. He said that when he refused Manondo and Gadama came to his house and told him he would die if he did not approve the payments.

“Cashgate was not only about civil servants. It was rot from above, sanctioned by top officials … a fish rots from the head,” said Tembenu.

Arrests
The Anti-Corruption Bureau’s deputy director, Reyneck Matemba, told the Mail & Guardian that the unit would arrest more top officials in the coming weeks. He declined to name them.

But Malawian news website Nyasa Times, quoting unnamed senior sources at the bureau, said Makande, Bophani (who ironically headed the Cashgate probe committee) are the officials next in line for arrest.

Makande handed himself in on Tuesday and was charged with conspiracy to defraud the government, the bureau said in a statement.

During raids on government officials when the scandal broke, Victor Sithole, an accounts assistant in the ministry of energy, mining and natural resources, was found with $300 000 and R122?200 at his Lilongwe house in September last year. He pleaded guilty to possessing foreign currency and to money laundering, and is awaiting sentencing.

Last week, the bureau also nabbed Malawi’s recently appointed director of public officers’ declarations, Christopher Tukula. The government hired him in August to establish a directorate that will make it mandatory for civil servants to declare their assets periodically.

Under Malawi’s laws, only a sitting president enjoys immunity from prosecution. A former president is not immune from prosecution. Ex-president Bakili Muluzi and his personal assistant are still facing trial for allegedly siphoning off $12-million in donor funds.

Banda’s lawyers fought in vain to prevent the release of her call logs, arguing that this would intrude on her privacy.

The department of public prosecutions believes that Banda might have clandestinely co-ordinated part of the looting through numerous calls to Mphwiyo, Bophani and Assani, and later used businessperson Lutepo as a conduit to launder the stolen funds.

Banda’s lawyer, Mauya Msuku, said only the call logs that were relevant to the case would be scrutinised.

Lutepo, through his company, International Procurement Services, is accused of siphoning off $6.2-million through dubious and ghost contracts. A former executive member of Banda’s People’s Party, he donated 22 vehicles to the party in November last year for its election campaign in May this year. Banda lost the poll, coming in a distant third.

The government seized the vehicles as part of the investigations into Cashgate, suspecting that they had been bought with money stolen from its coffers.

Smear campaign claim
After Cashgate erupted, donors suspended aid to Malawi – as much as 40% in budgetary support.

“No one would want to put money into a bucket that has holes and is still leaking,” German envoy Peter Woeste told Capital Radio this week.

Banda has consistently said the allegations are part of a smear campaign against her.

“I took on powerful people, including my former Cabinet minister, a risk very few African leaders facing an election could have taken,” Banda told the Nation newspaper in August.

She said the law would exonerate her of any connection to Cashgate.

A statement from the presidency said popular army commander General Vincent Nundwe, alongside his deputy Clement Namangale, had been replaced
Read more
Africa

Ignoring coronavirus fears, Malawi concentrates on its own political crisis

Women in Africa should not be viewed as having ‘special negotiating skills’. Instead, we should motivate for more women in leadership positions because of their equality as citizens
Read more
Africa

Africa’s women belong at the top