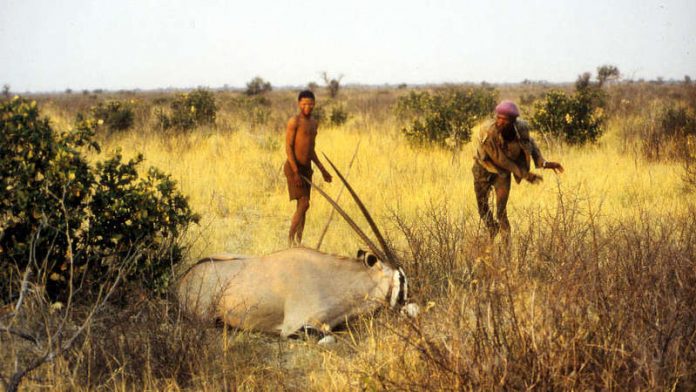 A new report by Survival International, the global movement for the rights of tribal people, provides details of more than 200 cases of beatings, arrests and other abuses suffered by the Kalahari Bushmen allegedly at the hands of Botswana government officials.

In January this year Botswana’s President Ian Khama imposed a ban on hunting by the Bushmen, on grounds that this served the interests of conservation.

Survival International pointed out that fee-paying big game hunters were exempt from the ban.

But the government’s perceived campaign to force the Bushmen out of the Central Kalahari Game Reserve does not appear to have weakened their determination to stay put.

On September 27 Khama visited the New Xade eviction camp as part of his election campaign and was met by Bushman protesters brandishing placards reading “Hunters, not poachers” and “Bushmen are the best conservationists”.

“We are not going to move from our ancestral land and will hunt the wild animals, as it is our way of living,” the spokesperson for the Bushmen, Jumanda Gakelebone, told amaBhungane. “The government will have to put us all in prison.”

The Bushmen have faced over 30 years of abuse from the state
Gakelebone said the government had “vowed that it will never bring us services as long as we are in the reserve – but they do bring us the services of law enforcement agents in the form of torture and abuse”.

He said the law enforcement officials, especially the paramilitary Special Support Group (SSG) of the Botswana police, and wildlife officials regularly raid the Bushmen in their homes and subject them to torture and abuse.

Survival International’s report provides details of more than 200 alleged instances of state persecution of Bushmen between 1992 and 2014.

They include allegations that:

Nkemetseng later produced medical records showing that on November 28 2012 a police officer took him to hospital and that he had sustained injuries to his teeth and jaw. The officers allegedly involved have not been charged.

Forced evictions off 20000 year-old ancestral land
The tension between the Bushmen, known as Basarwa in Botswana, and the government mounted during the 1990s when the authorities began forcing them to relocate from land that they are thought to have occupied for more than 20000 years.

The government claimed that it was part of efforts to make the central Kalahari a game reserve and that the two sides had reached an understanding in terms of which the Bushmen would move voluntarily and receive compensation.

The Bushmen disputed this, saying that the sole reason for the evictions was that the government wanted to exploit diamonds and other mineral resources discovered in the central Kalahari in the 1980s.

Many now live in camps outside the reserve, including New Xade. But others have returned and several hundred live in a number of separate communities inside the reserve’s boundaries.

In 2006 the Bushmen challenged the evictions in the Botswana High Court, arguing that the government had acted illegally when it cut off their water supply and drove them from their ancestral land.

The government argued that the Bushmen no longer belonged to the Kalahari because their lifestyle had changed and their presence interfered with conservation.

The court upheld the Bushmen’s claim, finding that they had the right to remain in the reserve as long as they wished.

State cuts off basic services
But it left the door ajar for further government harassment by finding that the authorities were “not obliged to provide basic services such as water to anyone returning to the reserve”.

The state subsequently announced that it would not provide services, including healthcare and water, to the remaining Bushmen population.

In 2011 Botswana’s Court of Appeal, the highest court, upheld the Bushmen’s right to sink boreholes.

But all the Bushmen, apart from the 189 original applicants to the 2006 court case, have to apply for restrictive permits to enter the reserve.

Khama’s anti-hunting proclamation in January has made it almost impossible for the Bushmen to pursue their hunter-gatherer traditions without transgressing the law.

The United States’ department of state has labelled Botswana’s treatment of the Bushmen a “principal human rights concern”.

Khama’s government has been condemned by the United Nations and the African Commission on Human and People’s Rights.

She decried the government’s continued efforts to force the Bushmen from their traditional hunting grounds, despite the 2006 and 2011 judgments.

Stenham said there was only one functioning borehole inside the reserve, despite promises by Gem Diamonds – which opened a $4.9-billion mine in the reserve last month – to fund several boreholes.

It was extremely difficult for the people to survive in the reserve, one of the driest places on Earth, Stenham said.

According to Gakelebone, Khama failed to address any of the issues affecting the Kalahari Bushmen during his visit, and they were not given the opportunity to ask any questions.

AmaBhungane sent questions to the Botswana government last week about the Survival International report, but had not received a reply by the time of going to print.

Online campaign advocates for tenants’ rights during the lockdown

Rent Strike South Africa says working-class families are struggling to keep up with paying rent during the lockdown. And, although there is a moratorium on evictions, it fears people will be put out on the street when the lockdown ends
Read more
Advertising