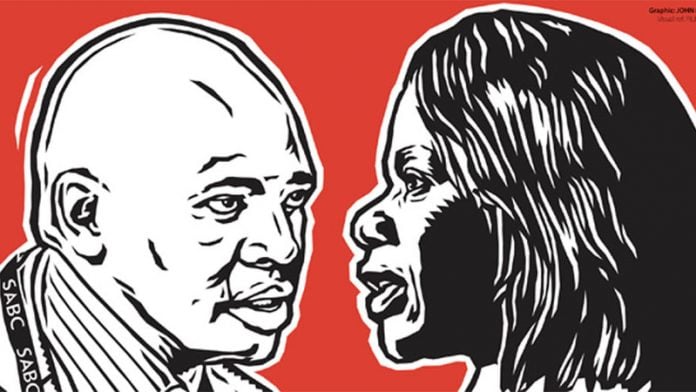 It was always going to be a tricky judgment to hand down – and the ink had barely dried on Western Cape high court Judge Ashton Schippers’s judgment in the Hlaudi Motsoeneng case when a variety of politicians started claiming victory in the broader political battle over Nkandla.

The Democratic Alliance had brought an application to the court when the SABC refused to adhere to the recommendation of the public protector, Thuli Madonsela, on the matter of the SABC’s (then acting) chief operating officer, the controversial Motsoeneng.

Madonsela had recommended that a new chief operating officer be appointed within 90 days, given that Motsoeneng had misrepresented his qualifications and then increased his own salary from R1.5?million to R2.4?million in a single year without the requisite approval.

But, rather than taking the remedial action ordered by the public protector, Communications Minister Faith Muthambi confirmed Motsoeneng’s appointment. Last week the court ordered that Motsoeneng be suspended and that disciplinary proceedings against him be launched within 14 days.

Judgment in the Democratic Alliance vs the SABC and Others was eagerly awaited because the case required the court to adjudicate on the precise powers of the public protector – the very issue that has divided the ANC and the opposition in Parliament recently. They have different views on how the public protector’s report on Nkandla should be handled and the matter has already led to the opposition walking out of the special ad hoc committee established to deal with it.

Essentially, the opposition parties were of the view that a fair outcome was impossible in the light of the ANC’s refusal to accept the primacy of the public protector’s report on Nkandla.

The ANC has simply equated its status with that of the reports of the Special Investigating Unit and the interministerial task team on Nkandla. The party has also taken the position that Madonsela’s recommendations – including that President Jacob Zuma pay back a substantial portion of the public money spent on his private homestead – are not binding.

Section 182 of the Constitution gives the public protector the power to “investigate any conduct in state affairs, or in the public administration in any sphere of government, that is alleged or suspected to be improper or to result in any impropriety or prejudice; to report on that conduct; and to take remedial action”.

So, what did Schippers actually say in his judgment in the SABC case? And what implications will it have for the work of the ad hoc committee on Nkandla – and beyond?

It should not have been a surprise, then, that the ad hoc committee chair, ANC MP Cedric Frolick, immediately responded to the high court judgment by saying the ANC had always held the view that the public protector’s findings were not binding in the same way as a court’s judgment would be. The South African Communist Party, always ready to jump to Zuma’s defence, also released a statement in which it urged Parliament to ensure that the public protector’s office did not “abuse” its powers and “overstep its mandate”.

Forty-15 to the opposition.

The judge further confirmed the right of the courts to make the final decision on the remedial action and how it should to be implemented. He then proceeded to enforce the public protector’s remedial action in the case of Motsoeneng.

The nub of the judgment is that any decision taken by government to disregard the public protector’s remedial action must be rational. “Rationality,” the court held, “is a minimum threshold requirement applicable to the exercise of all public power by the executive and its functionaries.”

But the judge went further, saying: “The organ of state must properly consider the findings and remedial action; the process by which that decision is made, and the decision itself, must be rational, having regard to the purpose of the public protector – to ensure that government officials carry out their tasks effectively, fairly and without corruption or prejudice.”

And, in case there was any doubt, he goes on to say that, where there is any dispute about the public protector’s findings or remedial action, the relevant organ of state “obviously has to engage [with] the public protector”, and “when an organ of state rejects those findings or remedial action, that decision itself must not be irrational”. Schippers then concluded that Muthambi’s confirmation of Motsoeneng’s position was irrational – and, in fact, there were “no grounds” for it.

Motsoeneng is, however, appealing the ruling, and the public protector has also said she will appeal. So this “trial run” for the Nkandla matter is likely to run and run, ever upwards towards the Constitutional Court.

Thus, rather confusingly, victory has been declared by both sides of the political divide, with the public protector awkwardly caught in the middle of this legal wrangle. For the ANC in Parliament, the judgment will no doubt become grist to its mill of letting the president off the hook and not calling for him to pay back any amounts by which he was personally enriched.

After all, as the lead ANC “attack dog” on the ad hoc committee, Mathole Motshekga, has said on so many occasions, the public protector’s remedial action is a “mere recommendation” and has no other force or effect.

The confusion is unhelpful. It contributes to the undermining of democratic institutions, because political parties are able to cherry-pick bits of such a judgment to suit their own purposes. In the high-stakes political environment of the Nkandla and the SABC matters, the legal reasoning behind Schippers’s judgment seems to have fallen by the wayside.

If we read the judgment carefully, it provides very clear guidelines for organs of state and their engagement with the public protector’s office. If one takes the judgment and applies it to the ad hoc committee on Nkandla, one might well say that a court would find that it had indeed exercised its power irrationally, given its failure to engage meaningfully – or at all – with the public protector’s remedial action. Instead, the committee selected elements that may best suit the president – for instance, by focusing on the reports by the Special Investigating Unit and the interministerial task team, which hardly have the same degree of constitutional independence as that of a chapter nine institution.

The political stakes are so high that there is no doubt this issue will reach the Constitutional Court one way or the other. Though our courts have shown themselves to be perfectly capable of independence when dealing with politically charged matters, it is regrettable that the ANC government and its representatives in Parliament appear to have lost their ability to engage rationally with a chapter nine institution when constitutional values clash with political patronage and opportunism.

If we cannot deal rationally with such matters, we will have lost some of our ability to deliberate in a way that transcends narrow party politics.

Judith February is a senior research associate at the Institute for Security Studies.

Judith February is based at the Institute for Security Studies and is a visiting fellow at the Wits School of Governance.