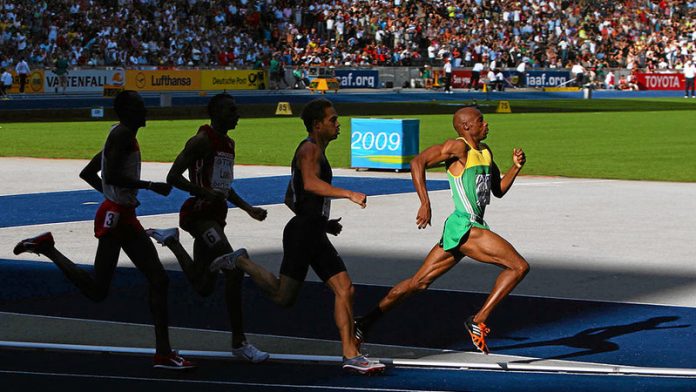 It took the sudden and premature death of middle-distance athletics star Mbulaeni Mulaudzi for the South African sporting public and our political and sports leaders to place his achievements in proper perspective.

Among those singing his praises and lamenting his death were South African Sports Confederation and Olympic Committee boss Tubby Reddy, Minister of Sport Fikile Mbalula and President Jacob Zuma.

Nevertheless, the dominant theme of the news reports and ­retrospective articles charting Mulaudzi’s career was that he was an unsung hero who had not received his just deserts.

Perhaps now that he is gone, the iconic status that eluded Mulaudzi while alive will posthumously be his.

After recurrent injuries forced him into retirement just before his 33rd birthday last year, an article by Fatima Asmal in this newspaper eloquently highlighted his credentials for a presidential sports award. Mulaudzi was nominated but in the 2014 honours he did not join Caster Semenya as a recipient of the Order of the Ikhamanga reserved for South African sports and arts achievers.

The omission is difficult to fathom from a strictly sporting point of view. In the post-apartheid era, the only South African athlete who has won more gold medals at Olympic, World Championship and Commonwealth level is high jumper Hestrie Cloete. Cloete was awarded the Order of Ikhamanga in 2003. She won four golds in such competitions, Mulaudzi won three.

In my assessment, Mulaudzi was South Africa’s greatest ever athlete. This view is strongly influenced by admiration for Mulaudzi’s uncompromisingly competitive nature. Not surprisingly, it is also the assessment of two of the men who coached him: Ian Harries and JP van der Merwe.

As Harries put it: “If your life depended on it, Mbulaeni is the man you would want to compete for you.”

International athletics statistician Peter Matthews regards Cloete as our greatest athlete but judging achievements in vastly differing athletics events is a matter of comparing apples and oranges. To make the argument for Mulaudzi’s pre-eminence, not all track and field events are equally competitive.

In his specialist event, the 800m, Mulaudzi was confronted in international competition not only with the might of East Africa but also with numerous other world-class athletes. In this context, if Mulaudzi’s world rankings and medal count in championship competition are roughly on a par with Cloete’s, he should be considered the greater athlete.

In the days since his death, sports writers have recorded his impressive array of performances and championship medals. But Mulaudzi’s remorselessly competitive nature made him dismissive of the three silver medals (one in the Olympics) and six bronzes he won at the major competitions.

Van der Merwe recalls: “For Mbulaeni, it was first or nothing – he was the most intensely competitive athlete I ever met.”

Under Van der Merwe, he was the fastest man in the world over 800m in 2006 and 2007 and Matthews’s International Track and Field Annual ranked him the world’s best 800m athlete in 2009 after his victory at the World Championships in Berlin.

Unsung as he may have been until now, Mulaudzi was indisputably a warrior of epic proportions. But the greatest victories in war and on the track are not won single-handed. Outside of his family, the crucial formative influence on Mulaudzi was his coach and schoolteacher in rural Venda, Makhonde Makhumisani, who noticed his athletic talent at the age of 12 and encouraged him to focus on running.

The race that defined his career and set a seal on his greatness was the 2009 World Championships. According to Van der Merwe, Mulaudzi “had got on a plane back to South Africa after struggling with injuries and bad form in Europe”. With only eight weeks to go to the World Championships, his Austrian masseur, known in athletics circles only as Bennie, had his hands full: “He was so badly injured he could hardly walk,” says Van der Merwe.

Together, Bennie, Van der Merwe, and a friend, Hezekiel Sepeng, restored his body and mind and devised a winning plan. Sepeng suggested that, with younger, faster men in the field, Mulaudzi’s only chance of winning would be to take the lead and control the race.

Van der Merwe describes the race: “Mbulaeni took the lead from the start and after a slowish 53 first lap, he went hard for the finish with 300m to go. Although his rivals did not take his chances seriously, he managed to hold them all off. He won with a final lunge for the line.”

It hardly ever happens that an 800m race is won from the front. The drama of the 10 nerve-wracking seconds of Mulaudzi fighting off his rivals in the finishing straight can be viewed on YouTube. This son of Limpopo can be seen calling upon his deepest reserves and, dare one say it, the strength of his ancestors to achieve victory against all odds.

The brilliance of Mulaudzi’s victory in Berlin was immediately forgotten amid the controversy which engulfed Caster Semenya after the championships. More generally, the tarnished image of South African athletics obscured his brilliant career.

One can only hope that when next we find an athlete of Mulaudzi’s calibre in our midst, he or she will be appreciated accordingly.

With stadiums shut, clubs and leagues are turning to the video games to stay relevant
Read more
Sport

Roller derby skaters relish the challenge of taking to the track, despite the high risk and little reward
Read more
Sport