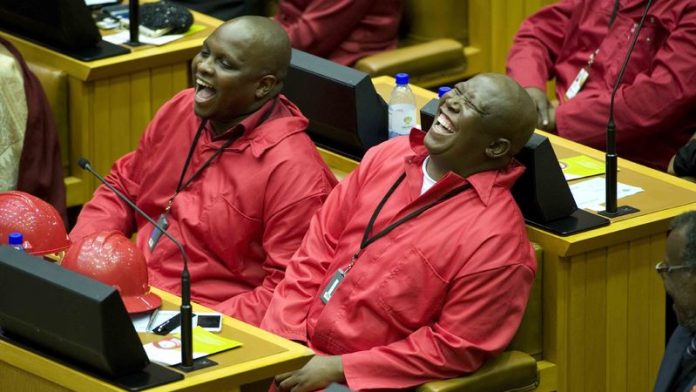 Parliament announced on Monday that Speaker of the National Assembly Baleka Mbete has requested the Powers and Privileges Committee, which deals with MPs’ disciplinary matters, to inquire into an incident that took place on September 17 during a question and answer session with deputy president Cyril Ramaphosa.

Economic Freedom Fighter (EFF) Floyd Shivambu showed Ramaphosa the middle finger as he was walked out of the National Assembly at Mbete’s instruction. Shivambu and EFF leader Julius Malema had insisted that Ramaphosa was a murderer and had blood on his hands.

They refused to withdraw those comments when instructed to do so by Mbete. Instead, they chose to leave the assembly, but not before Shivambu flipped the bird at the deputy president.

Shivambu later issued a press statement in which he expressed regret in showing Ramaphosa the middle finger and vowing to “withdraw” the gesture during a sitting of the National Assembly. He is yet to do so.

Ramaphosa ‘responsible for Marikana deaths’
Malema has asked Ramaphosa how he reconciled his testimony before the Farlam commission of inquiry, including his characterisation of the mineworkers’ strike as having gone beyond a labour dispute and the resultant deaths of 34 mineworkers at Marikana, with any of the government interventions to alleviate the suffering of the victims of the tragedy.

Ramaphosa mentioned how the government sought to assist the families of those who died to establish the facts about what happened through the appointment of the Farlam commission of inquiry and other avenues.

In following up, Malema asked: “Why is the deputy president not accepting that you are responsible for the death of 34 mineworkers who died, that you killed them because you were driven by profit and the interest to defend your shares as an economic security guard in the economy of South Africa, and stop this thing that we must all take responsibility.”

“We can’t take responsibility for the thing we don’t know. You are the one who wrote emails and instigated the killing of 34 people.”

” … And sitting there, your hands have got blood of innocent people who died in Marikana and I think it is important for you to accept that you are responsible for the deaths of 34 people,” added Malema.

Refusal to withdraw remarks
Mbete interjected and instructed Malema to withdraw the remarks that Ramaphosa had blood on his hands. Instead of withdrawing, Malema repeated “the deputy president’s hands have got blood, a lot of blood of 34 innocent mineworkers”.

Mbete ordered him to leave the House. Shivambu entered the fray and demanded that Mbete explain the rule “preventing us from saying that Cyril is a murderer”.

“He is a murderer of workers in Marikana, it’s a fact. He said there must be concomitant action in Marikana, and they killed the workers,” said Shivambu.

Both refused to withdraw their remarks when instructed to do so and the entire EFF contingent walked out in solidarity with its leaders, as Shivambu gestured towards Ramaphosa.

Meanwhile, the powers and privileges committee is still seized with another disciplinary matter involving 20 EFF MPs who chanted “pay back the money” to President Jacob Zuma when he appeared before the national assembly to answer oral questions.

The committee started deliberations in a closed meeting on Monday, on the report by the initiator [prosecutor] after concluding interviews of witnesses last week.